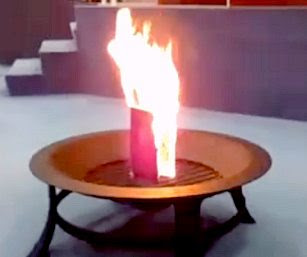 LISBON, Portugal (AP) — Portuguese protests against the burning of a Bible in Indonesia entered a third day with demonstrations in the east on Sunday, while the Patriarch of Lisbon called on people to rise up, blaming government forces for any violence.

The desecration at a small Indonesian mosque has outraged Christians worldwide, and in Portugal many of the demonstrations have turned into deadly riots. Protests in the north and south in recent days have killed 20 people.

The protest in Lisbon was peaceful, with hundreds of people blocking a main highway for three hours, burning an effigy of President Susilo Bambang Yudhoyono before dispersing, according to an Associated Press photographer at the scene.

A similar protest in eastern Beja blocked a main highway with burning tires for about an hour, with more than 1,000 people protesting against the desecration of the Bible, said provincial police chief Hernando Teixeira. He said there was no violence.

The Patriarch of Lisbon said in a statement e-mailed to media outlets that Indonesia and other Muslim countries have wrongly excused the burning of a Bible by the imam of a Indonesian mosque on March 20 as freedom of speech and that the Portuguese “cannot accept this un-Christian act.”

If I had run the above pastiche on April Fools’ Day, nobody would have been fooled for a second. “Come on Baron!” the comments would have said. “Give us something that looks credible, for crying out loud!”

Funny about that. All I had to do was exchange the relevant proper nouns in an article from USA Today to obtain the spoof text above.

There’s never more than a hair’s breadth between the absurd and the obscene where Islam is involved.

The outrage in Afghanistan over the burning of a Koran shows no sign of abating. According to MSNBC:

At least 10 people have been killed and 83 injured in the southern Afghan city of Kandahar, officials said on Saturday, on a second day of violent protests over the actions of extremist Christian preacher Terry Jones, who supervised the burning of the Quran in front of about 50 people at a church in Florida on March 20, according to his website.

A suicide attack also hit a NATO military base in the capital Kabul, the day after protesters overran a U.N. mission in the northern city of Mazar-i-Sharif and killed seven foreign staff in the deadliest attack on the U.N. in Afghanistan.

The recent burning initially passed relatively unnoticed in Afghanistan, but after criticism from President Hamid Karzai and calls for justice during Friday sermons, thousands poured into the streets in several cities to denounce Jones.

Trouble always starts in the mosques during Friday prayers, when the imams exhort the faithful to righteous anger on behalf of the faith, and then send them out into the streets to do their duty to Allah. Under sharia, this sort of behavior is not only legal, it is mandatory — provided that Islam has been insulted.

And from an AFP report:

Ten people died amid fresh protests that began in the center of the main southern city of Kandahar and spread as police clashed with crowds on Saturday, a day after seven UN staff were killed in the northern city of Mazar-i-Sharif, the worst attack on the world body in the country since the 2001 invasion.

Kandahar is the spiritual heartland of the Taliban, who have fought an insurgency against President Hamid Karzai’s government in Kabul and its Western allies since they were ousted by the US-led invasion.

“Death to America” and “Death to Karzai” chanted the demonstrators. “They have insulted our Koran,” shouted one.

So Hamid Karzai is in the crosshairs of the mujahideen, too — no wonder he wants Terry Jones locked up.

Back in 2006, Prof. Ekmeleddin Ihsanoglu, Secretary General of the OIC, had this to say [pdf] about the Danish Mohammed Cartoon Crisis:

The angry reaction in the Muslim world… is mainly due to the premeditated and deliberate attack on the revered person of the prophet, whose holy position, message and teachings were maliciously and calculatingly sacrileged by the so called defenders of freedom.

The same standard is being applied today to the burning of a copy of the Koran at the Dove World Outreach Center in Florida. The actions of Terry Jones and his associates constitute the most grievous of sacrilege under sharia, and must be punished by death.

When Afghan President Hamid Karzai insisted that the desecrators of the Koran be “brought to justice”, he obviously meant “justice” as defined by Islamic law, and not by the United States Constitution. In other words, he is calling on President Barack Hussein Obama to uphold sharia law in a non-Muslim country.

At this point it’s hard to say to what extent Mr. Obama will oblige him. The signs are not auspicious, however — the most urgent official preoccupation of the United Nations and the U.S. government during the crisis is to somehow appease the anger of Muslims who are outraged by the burning of the Koran, and not to condemn the atrocities which were committed in response:

[UN envoy Staffan] de Mistura spoke in a somber tone as he described how three U.N. staff members and four Nepalese guards were killed Friday when the protesters stormed their compound in the normally peaceful city of Mazar-i-Sharif. He placed direct blame on those who burned the copy of the Muslim holy book in Florida.

“The demonstration was meant to protest against the insane and totally despicable gesture by one person who burned the holy Quran,” he said.

Notice that Mr. De Mistura spoke reverentially of “the holy Quran”, as if he were a Muslim himself. What’s more, the beheading of innocent victims is not described as “insane and totally despicable” — that description is reserved for the burning of a book.

However, that’s just the United Nations — and we all know how they are. How about the U.S. Military?

Below is the joint statement released by Gen. David Petraeus and the NATO command in Afghanistan:

KABUL, Afghanistan (April 3, 2011) — In view of the events of recent days, we feel it is important on behalf of ISAF and NATO members in Afghanistan to reiterate our condemnation of any disrespect to the Holy Qur’an and the Muslim faith. We condemn, in particular, the action of an individual in the United States who recently burned the Holy Qur’an.

We also offer condolences to the families of all those injured and killed in violence which occurred in the wake of the burning of the Holy Qur’an.

We further hope the Afghan people understand that the actions of a small number of individuals, who have been extremely disrespectful to the Holy Qur’an, are not representative of any of the countries of the international community who are in Afghanistan to help the Afghan people. [italics added]

As you can see, Gen. Petraeus also identifies the Koran as a holy book — just as if it were his own venerated scripture. Heck, for all I know, it might be.

Also notice that those individuals who burned the Koran are accounted culpable, and considered responsible for their actions, while the bombers and murderers and beheaders are like a natural disaster that “occurred in the wake of the burning of the Holy Qur’an”.

If this is the response of our brave men in uniform, you can imagine what their Commander-in-Chief is saying. Here’s the full text of a statement released yesterday by Barack Hussein Obama:

Today, the American people honor those who were lost in the attack on the United Nations in Mazar-e-Sharif, Afghanistan.

Once again, we extend our deepest condolences to the families and loved ones of those who were killed, and to the people of the nations that they came from.

The desecration of any holy text, including the Koran, is an act of extreme intolerance and bigotry. However, to attack and kill innocent people in response is outrageous, and an affront to human decency and dignity.

No religion tolerates the slaughter and beheading of innocent people, and there is no justification for such a dishonorable and deplorable act.

Now is a time to draw upon the common humanity that we share, and that was so exemplified by the UN workers who lost their lives trying to help the people of Afghanistan. [italics added]

Once again, we are called to “honor those who were lost in the attack”, as if it were a tsunami or a forest fire. And the reference is to “those who were killed”, using the passive voice — no agentive is involved.

Mr. Obama, like the generals and the UN envoy, considers the Koran to be a “holy text”. If I didn’t know him to be a Christian, I would assume the president was speaking as a Muslim himself. And if that were the case, the statement “No religion tolerates the slaughter and beheading of innocent people” would be an instance of kitman, deliberate misdirection — under sharia, non-Muslims cannot be innocent. They are all kuffar, who are by definition guilty. Killing non-believers is not always mandatory, but a Muslim who does so cannot be punished under Islamic law except under certain narrowly-defined circumstances.

What all these official pronouncements have in common is that they grant no agency to the Muslims who commit violent atrocities. The murderers of Kandahar and Mazar-i-Sharif are not responsible for their behavior.

But Terry Jones is responsible for what he does. He is judged culpable for his “desecration”. The violence that follows is like the wind and the rain — it just happens. It’s tragic but inevitable, once the flames rise up from the pages of the book. There’s nothing that can be done about it.

We expect that brand of nonsense from Muslims — their watchword is inshallah, after all. But to hear it from our own political and military leaders is appalling.

They have evidently absorbed the core principles of PC MC, in which only white people are held to be responsible for their actions. Since all Muslims are automatically “brown” people, they cannot possibly be responsible. So it’s all the white man’s fault — in this case, the fault of a handful of white men in Gainesville, Florida.

There’s no getting away from it: the United Nations, the President of the United States, and the U.S. military are overtly supporting sharia law. If the president were to find a relevant federal statute and have the FBI arrest the “desecrators”, he would be enforcing sharia law.

Such an action seems unlikely at this point — and would have been unimaginable before January 20, 2009 — but it can’t be ruled out. Mr. Obama is a knee-jerk appeaser of Muslims, and the “Muslim street” is demanding that the Koran-burners be punished. This is a huge opportunity for appeasement, one that he would surely hate to miss.

If there is even the flimsiest of pretexts under which Terry Jones and his co-pastor could be indicted in federal court, it’s bound to happen. The law — Islamic law — demands it.

13 thoughts on “A Mandate to Protect the Holy Book”