I posted last weekend about the ongoing refugee crisis in the Mediterranean, which was triggered by the recent upheavals and rebellions in Tunisia, Egypt, and Libya.

The brunt of the exodus from the Maghreb is being borne by Italy, with most of the migration flow landing on the shores of Lampedusa, and, to a lesser extent, Sicily. 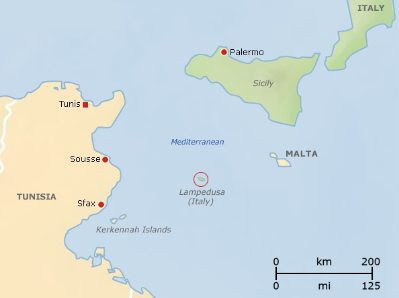 According to AGI, at least 423,000 people have fled from Libya since the uprising began, with 20,000 more departing every day. The majority of these refugees end up in Egypt or Tunisia, and most of the rest escape to adjacent countries south of the Sahara. However, an estimated 2,000 have crossed the Mediterranean to Malta and Lampedusa.

The new wave of migrants from Libya can only be expected to increase. The Libyans are being added to an already overwhelming refugee crisis on the island of Lampedusa, where 6,000 to 10,000 refugees have accumulated in the last several weeks, arriving too suddenly to be processed quickly and shipped off to other parts of Italy.

The situation on Lampedusa has become so grave that Prime Minister Silvio Berlusconi felt compelled to visit the island and reassure the residents that the crisis would be addressed promptly, and that most of the refugees would be removed within two to five days. Sure enough, 1,700 Tunisians were carried by boat today from Lampedusa to Manduria. Additional batches of Tunisians will reportedly be relocated to the refugee camp at Ventimiglia, near the border with France. Migrants held at the Ventimiglia camp routinely escape and attempt to cross into France.

Mr. Berlusconi has complained to the Tunisian government that escaped Tunisian prisoners are among the arrivals at Lampedusa, posing as refugees.

Up until now, Italy has faced the refugee crisis virtually alone. France turns back any refugees that attempt to cross the border, and has warned the Italians not to prevent them from returning to Italy. The EU has repeatedly promised financial help, but says it can do little else. According to the EU’s immigration affairs chief, Cecilia Malmstrom, the EU wants its member states to help, but cannot compel them:

Remember: this is the European Union we’re talking about — a huge authoritarian bureaucracy that assigns the size of doughnut holes and the density of cheeses. It can force its member states to restrict the height of signage, but it can’t force them to accept refugees…?

Funnily enough, however, it can force them not to turn away migrants, as Brussels has repeatedly reminded Italy. It can also mandate in exact detail how the refugees are to be treated.

Today Ms. Malmstrom promised new talks and more “help”, but this is all that Italy can expect for the foreseeable future. The Italians are unhappy with the situation, and have responded by daring to mention the “R” word — repatriation:

(ANSAmed) – ROME, MARCH 31 – The migrants who have arrived in Italy “must be repatriated to Tunisia or distributed among other European countries,” said Italian Foreign Minister Franco Frattini on the eve of a cabinet meeting on the emergency situation as concerns immigration.

The head of Italy’s foreign office underscored the “scandalous” nature of the lack of solidarity shown by European countries, including those to which many Tunisians would like to go. A lack of solidarity shown by, “to begin with France,” a country to which the minister yesterday accused of rejecting Tunisians and sending them back to Italy at the Ventimiglia border crossing.

Mr. Frattini is at pains to emphasize that despite the EU’s human rights laws, the proposed repatriations will be forced:

(ANSA) – Rome, March 31 – Thousands of Tunisian migrants who have landed in Italy following unrest in North Africa may be forcibly repatriated unless the burden of hosting them is shared with other European nations, the Italian government said Thursday.

“They must be repatriated or distributed around other European countries,” Italian Foreign Minister Franco Frattini said in a telephone interview with a TV show following the arrival of around 20,000 mostly Tunisians this year.

He added that the hypothesis of “forced repatriation is an extreme measure but it cannot be excluded”. The minister then repeated his criticism of the “flagrant” lack of solidarity Italy’s European neighbours had displayed in failing to help with the migrant crisis in a significant way, “starting with France” after it blocked thousands of Tunisian migrants at the French-Italian border.

And the destinations for the relocated migrants are causing internal political problems in Italy:

Interior Ministry Undersecretary Alfredo Mantovano tended his resignation Wednesday evening in protest at the number of migrants being moved near his home in the southern town of Manduria and several protests were staged in the areas of migrant camps in other parts of Italy. Frattini, meanwhile, added that an agreement struck last week with the Tunisian government to stop the wave of migrants from there in exchange for Italian resources, training and credit was starting to bear fruit.

Some of the new arrivals will be consigned to the care of the Northern League:

(AGI) Rome – Maroni has said all regions, except for Abruzzo, including those governed by the Northern League, must host immigrants. After a Cabinet meeting held today, Roberto Maroni said, “Should Tunisia take back three, four or five thousand Tunisians, we will not have a problem. Should this not happen, the plan is ready and no one can avoid helping in managing this emergency, including regions in the north and those governed by the Northern league.”

And there has been trouble at the detention center in Turin:

(AGI) Turin – Immigrants hurled plastic bottles, shouted and caused damage at the Turin detention centre last night. At around twenty past midnight, immigrants being held at the centre mounted a loud and unruly protest, during the course of which bottles were hurled at staff and one of the housing units was damaged as well as a bathroom door. Things got back to normal around 2.30. The Police are currently ascertaining who was to blame for the unrest and the ensuring damage.

The migration crisis in Italy is only just beginning. As the civil war continues, more Libyan refugees can be expected, and renewed turmoil in Tunisia or Egypt could add to the flow of new migrants. The total number of migrants is expected to reach the hundreds of thousands before long.

If the EU continues to drag its feet, and refuses to share the burden with Italy, what will happen to the much-vaunted unity of the EU?

What will become of the “ever-closer union”?

3 thoughts on “Lighting Out for Lampedusa”