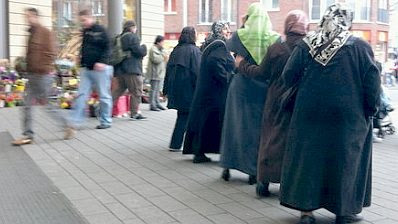 I posted last weekend about the bullying manner displayed by Turkish Prime Minister Recep Tayyip Erdoğan towards the Germans, as if Germany were his own personal fiefdom.

This excellent article from Politically Incorrect sheds additional light on the subject. It describes the craven behavior of German politicians, who compete with each other to pander to Turkish voters.

The Turkish vote is crucial at the margin, and is enough to swing an election. Catering to Turkish voters can only be effective if the Turks in Germany vote as a bloc, which they tend to do. Native Germans — who still enjoy an overwhelming majority — could counter this by voting as a bloc themselves, but this is unthinkably racist in the current climate. To make matters worse, there is no significant difference among the major parties on issues related to immigration and Multiculturalism, although that may be in the process of changing.

How Politicians Cut Themselves Off At the Knees
by Kassandra Komplex

Many people wonder why Muslims are courted so much by German politicians. But the reason is clear. It has been quite a while since Muslims reached a numerical proportion at which they can and definitely do influence election results.

Former chancellor Gerhard Schröder had already recognized this potential. When his re-election was in the balance in 2002 he bet on the Turkish card. By promising the Turks to be a strong proponent of Turkish entry into the EU, he got the necessary majority. The Turks tipped the scales to assure Schröder’s re-election. His efforts and his loyalty to Turkey, as is known, continue to this day.

This example has not been forgotten. Since then, the number of immigrants has continued to increase. The role Muslims play in a democracy grows year by year with the demographic development. Thus, they have become a factor for politicians that must be considered in their planning. No one has summed up this thought process as well as Martin Neumeyer, the CSU integration officer of the Bavarian state government:

“In the medium term, we will win no more elections without Muslims. The CSU must be honest with itself about that. I think many Muslims are like CSU voters: conservative, religious and attached to their home. As a party, we must canvass the liberal Muslims.”

Without wishing to go into the somewhat aggrandized view of Muslims, it is the first sentence that is decisive: “In the medium term, we will win no more elections without Muslims.”

You try to finagle the votes with little gifts and ever more extensive concessions. And this strategy seems spread across all fractions and applies to all major parties. The city of Munich offers a wonderful example, where the Muslim vote is being sought by offering the reward of the center for Islam in Europe. The construction seems to be a done deal already and any criticism of it and of its controversial imam is stubbornly ignored. Any criticism of Islam is criticized and made more difficult with more severe laws. Everything in Muslim terms. You do not want to scare away future voters.

On sober refection, it seems doubtful that this calculation will work out. Unconditional intervention for a minority at the cost of the majority makes for growing discontent in the latter. Most recently, since the Sarrazin debate, the social climate has changed noticeably and many citizens are no longer reluctant to address topics such as the demographic change in favor of the Muslims, and their failure to integrate. And although politics and the media have done everything imaginable to play this down, a process of social rethinking has begun, which could have a lasting effect on future voters.

Many citizens increasingly feel that they are more and more poorly represented by the mainstream parties and the general disappointment in their policies is growing — policies that have nothing to do with the population’s own interests. By one-sidedly currying favor with a minority to gain its votes, the parties run the risk of losing votes on the other side because many disappointed voters will defect to one of the new “right” parties. Following on the Sarrazin debate, polls have shown that interest in a new “right” party would persist if there is an alternative. So the nicely laid-out strategy of capturing Muslim votes could turn out to be a white elephant.

While the MSM are waxing enthusiastic over the democratic change on the Arabian Peninsula, Islam critics are more likely to regard this development skeptically, and the Pew Research Center’s study should at least cause some reflection. On the question of whether Islam should play a large role in politics, 95% of the Egyptians were for it, only 2% wanted a smaller role. Jordan came in last, where 53% were for a large role and 2% for a small role. Of special interest to us are the poll results in Turkey where 45% want a large political role for Islam and 26% a small one. Altogether, that means that 71% of Turks want Islam to play some role in politics.

Even proceeding from the optimistic assumption that the numbers are lower with German Turks, a certain tendency can be identified, which should make German politicians thoughtful. Because they cannot satisfy this basic need of the Muslim voters without betraying their own basic program.

In the long run, unbeknownst to themselves, the politicians are sawing off the limb they are sitting on. As their proportion of the populace increases, the Muslims in future will prefer new parties of their own, like the “Bremen Turkish Party (BTP),” “BIG” or the “Federation for Peace and Fairness”, which represent their interests better than the established parties. It is quite foreseeable that future parties will increasingly concentrate on the subject of Islam. The established parties will have less and less significance for devout Muslims. And when Muslims form the majority — which seems only a matter of time — the established parties will dwindle into insignificance, no matter how many immigrants they include in their ranks.

Unfortunately, such long-term considerations are not included in the calculations of politicians, few of whom plan beyond the next legislative session. And that is the error of reasoning adopted by Martin Neumeyer and many of his party colleagues, when they cast an eye on Muslim votes. With a growing Muslim majority, the Christian parties above all will be an absolute No Go for them, just because of the C in their names. And all the other parties will have only a tiny advantage if an Islamic party is available as an alternative.

It is not without reason that an Ibrahim El-Zayat assumes Muslims could elect the first Muslim federal chancellor by 2020. Developments seem to bear him out. When you consider what influence Muslims already have on policy, despite a comparatively small percentage of the population, this estimate is not at all unrealistic.

12 thoughts on “German Politicians Do Away With Themselves”