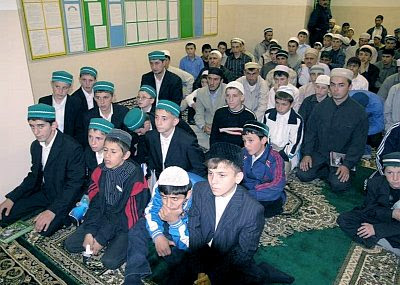 Russia is moving towards the establishment of a consolidated state-controlled Islamic education system. Like the sharia court system in the UK, state madrassas in Russia seem to be the government’s way of recognizing an existing trend and controlling the foreign — and possibly subversive — elements that enter the country with the madrassa teachers.

The Russians are experiencing the same dilemma faced by all non-Muslim countries when confronting Islamic infiltration: official recognition of certain elements of sharia law creates a de facto Islamic state, at least in part.

Below is a brief report on the topic from Asia News:

Muslim Leaders Call for an Islamic Education System in Russia

The supreme mufti Talgat Tadzhutddin proposes to introduce a comprehensive network of schools, from madras to academy: so we can attract other Muslims from the West.

Moscow (AsiaNews / Agencies) — Making Russia a centre for Islamic education that will attract Muslim students from the West. This is the proposal of the supreme mufti of the Spiritual Council of Russian Muslims, Talgat Tadzhutddin, who suggests creating a network in the Federation of Islamic institutions, from the madras to the academy through universities.

“This is an important strategic objective because in this way we are no longer dependent on foreign Islamic universities,” said Tadzhutddin during a meeting March 19 in Penza between the spiritual leaders of the Volga region and Grigory Rapota, Special Representative of the Russian President in the area.

As Ria Novosti agency reported, according to the mufti foreign Islamic education has “side effects that are not easy to vanquish and which influence the minds of our youth.” “In the near future – said Tadzhutddin – with state support seven Islamic universities will be built, but it is only the first step.” The country, he said, needs a complete school system, made up of three levels: “madrassas, Islamic universities and academies.” In this way the use of foreign teachers will be reduced only to the teaching of Arabic, excluding religious disciplines. (N.A.)

4 thoughts on “Embracing the Madrassa”