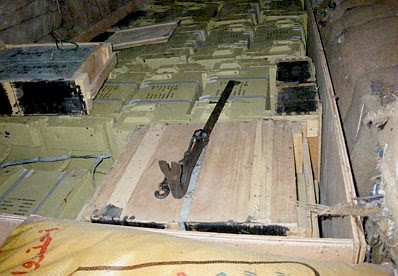 The Israel Defense Forces seized a ship today bearing a cargo of Iranian weapons bound for Gaza. According to one report, the haul included at least four surface-to-sea missiles with a range of 35 kilometers (21.7 miles) and a radar system capable of recognizing ships before they can launch.

The IDF seized a freighter ship with dozens of tons of weaponry from Iran headed for Hamas in the Gaza Strip on Tuesday.

The ship, known as Victoria, was flying a Liberian flag, and was seized by the navy in the Mediterranean Sea, 200 miles off of Israel’s coast.

The Victoria was boarded by commandos from the Israeli Navy’s Flotilla 13, also known as the Shayetet, arrived in the Ashdod port on Tuesday evening.

An initial inspection of the cargo revealed the ship was carrying weapons. The exact amount is to be determined.

The crew, questioned by the Navy Commando, was not aware that the cargo contained weaponry.

The ship set sail Monday night from the port of Lattakai in Syria and from there it traveled to Turkey. There, it was supposed to unload the weapons, which would travel by land to Gaza. The IDF’s assessment is that the weapons did not originate in Turkey, but that the containers were unloaded there and transferred onto the Victoria.

The port of Lattakai is the same port where two Iranian war ships docked in February on their way to the Suez Canal. At the time, IDF officials raised concerns of the possibility that they were carrying weapons intended for terrorists organizations, but there was no confirmation.

“The operation was approved as necessary in accordance with government directives in light of Chief of the General Staff Lt. Gen. Benny Gantz’s recommendations,” an IDF statement read.

Gantz updated Defense Minister Ehud Barak about the findings on-board the vessel earlier in the morning.

Notice that the cargo was carried on a German-owned ship operated by a French shipping company:

“The IDF and the Ministry of Foreign Affairs alerted German authorities about the interception of the “Victoria” due to the German ownership of the ship,” the statement said.

In addition, the government of Liberia, whose flag it was flying under, was notified, as well as France, due to the French shipping company.

In November 2009, the Israeli Navy seized the Francop cargo ship, which was carrying 500 tons of weaponry from Iran to Hezbollah in Lebanon, including Katyusha rockets and grenades. At the time, IDF officers said the amount was enough to sustain Hezbollah for several weeks of war.

The amount of weaponry found on the ship was smaller than that found on the Francop, but IDF sources said the munitions appeared to be of higher quality.

They said that mortar shells of different sizes and ranges have already been found.

Al Jazeera’s report doesn’t differ substantially from the Israeli versions. But you’ll notice two things about this article — first of all, everything the IDF found is in scare quotes or is listed as “claimed”, which is also the customary practice of the BBC when writing about Israel. I’m surprised they didn’t sprinkle the text with the word “alleged” in front of each statement by the IDF:

Ship boarded in the Mediterranean was carrying Iranian arms to Hamas fighters in Gaza, Israel claims.

Israel’s navy says it has boarded an Egypt-bound ship suspected of carrying Iranian weapons to fighters in the Gaza Strip.

In a statement the Israeli Defence Forces (IDF) said it intercepted a Liberian-flagged vessel called Victoria some 200 nautical miles off the Israeli coast in the Mediterranean Sea on Tuesday.

“According to assessments, the various weaponry on-board the vessel was intended for the use of terror organisations operating in the Gaza Strip,” it said, but did not describe the type of arms found on-board.

Benjamin Netanyahu, the Israeli prime minister, said in a statement that he had approved the operation and claimed that the weapons came from Iran.

“We had a solid basis that onboard the ship was weaponry destined for use against Israel. Considerable weaponry, which was destined for terrorist forces in the heart of Gaza, was found onboard the vessel,” he said.

“The operation was carried out at sea in accordance with all international rules. The weaponry originated in Iran, which is trying to arm the Gaza Strip.”

And what does Hamas say? Just what you’d expect: “Weapons? What Weapons? We didn’t see no weapons, boss. Ain’t nobody here but us shahids!”

However a Hamas spokesperson denied that the ship’s contents were intended for Palestinian fighters, describing the Israeli statement as propaganda designed to damage the reputation of Hamas in the international community.

Israel said the boat was on its way from a port in Turkey to Alexandria in Egypt, but that “Turkey is not tied to the incident in any way”.

It added that the crew, which put up no resistance when confronted by Israeli forces, would be transferred to an Israeli port for questioning and further inspection.

Israel has previously accused Hamas of shipping arms through Egypt.

The ship is said to be German-owned and operated by a French shipping company.

I don’t expect the MSM to make much of this incident, but we shall see.

4 thoughts on “Contraband Weapons for Hamas”