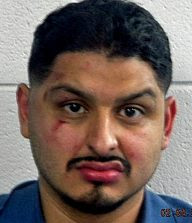 When this news story first came over the wire this morning, it made me wonder if Muslim terrorists had switched tactics, and started hijacking Greyhound buses. The photo of the alleged perp reinforced that impression — to a xenophobe like me, he looks just like a Middle Eastern terrorist.

But then the police released his name, Jose Flores, and said he hailed from Arlington, Virginia. This means he’s probably Mexican, or perhaps Salvadoran or Guatemalan. As of this writing, the police still refuse to discuss a motive for the hijacking and kidnapping.

I became aware of my inherent “racism” as soon as I read the descriptions of Mr. Flores as a “Virginia man” or “an Arlington man”. My immediate reaction was: “This is not a Virginian! I don’t care how long he’s been here — he’s not a Virginian!”

Especially coming from Arlington, which is VINO — Virginia in Name Only.

When I lived in Arlington 35 years ago, its immigrant population was maybe 10-15%, based on the visible evidence. I don’t know what the percentage is now, but every time I go back there, I see very few white faces, and not even very many American blacks. Mexicans, mostly, plus Vietnamese, Koreans, Afghans, Pakistanis, Iranians, Iraqis, Somalis, Nigerians, and maybe some Russians, although they’re hard to spot. You see business signs and advertising in a dozen languages.

Things are a bit different down here in the back country. I am a native Virginian, with an unbroken chain of family in the Commonwealth going back at least eight generations. However, since I have only lived in this county for thirty years, here I am technically known as a “foreigner”. My son, although he was born here, may also be one, depending on whether he learns to speak the local dialect fluently. If he raises his children here, they may finally be considered natives — if they comport themselves according to local customs.

All this is fair and normal. If I moved to Sweden and lived there for thirty years, I would not expect to be called a “Swede”, no matter how well I spoke the language.

Yes, I realize that America is different, and that anybody can become an American. Move here, learn to say “First Amendment” and “constitutional rights”, take the oath, and bang! You’re an American.

But not a Virginian — that’s different. That’s an honor that can only be earned over several generations. If you behave yourself.

OK, My rant is over. Now for the news story itself, about last night’s bus hijacking of a bus in Warren County, North Carolina, from WRAL:

Henderson, N.C. — Warren County authorities charged a man in connection with the hijacking of a Greyhound bus along Interstate 85 late Thursday.

Jose Flores, 32, of 54 Eighth St. Arlington, Va., faces one count of kidnapping, said officials with the Warren County Detention Center. His bond hasn’t been set yet, and he was scheduled to appear in court on Feb. 16.

Passengers on the Greyhound bus from Richmond, Va., to Raleigh said it wasn’t clear what the suspect wanted.

“He was just irate, (didn’t) make no sense,” passenger Xavier Little said. “Nobody understood what was the purpose. He kept saying, ‘I want to go to the courthouse, the nearest courthouse.’”

Vance County Sheriff Peter White said that a passenger asked the driver a question, then pulled out a gun along Interstate 85 South in Warren County. He also implied that he had a bomb.

Passengers said he ordered them to get off the bus, but they were frozen.

“We were too scared. We didn’t know if he was going to shoot us in the back of the head for getting off the bus,” Little said. “He just kept yelling, ‘Y’all got a problem? Y’all going to do something? I got nine shots, and I’ll start killing right from the front.’”

Robert Fusco said the hijacker then pointed the gun at him and three other passengers in the front. “He talked about shooting us an example,” Fusco said.

The suspect forced the driver to stop along I-85, and all but two of the approximately three dozen passengers got out before the driver continued on, White said.

Meanwhile, a passing driver called 911 and followed the bus, White said. When the bus stopped at a gas station in Henderson, officers with drawn guns surrounded it.

The driver and two passengers got away safely, and authorities used a stun gun on Flores before taking him into custody, White said. A search turned up no explosives on the bus.

Greyhound sent another bus to take the passengers to Raleigh. Passengers said they were nervous to continue on their trips.

Fusco, who was traveling to visit family in Florida, called for increased security measures on buses.

“Something’s got to be done. I could have been dead tonight,” he said. “Anybody could walk up on here on a Greyhound bus and have a gun on them and without checking nobody. It might slow things down, but this ain’t right.”

Calls to Greyhound Friday morning have not been returned.

29 thoughts on “To be a Virginian”