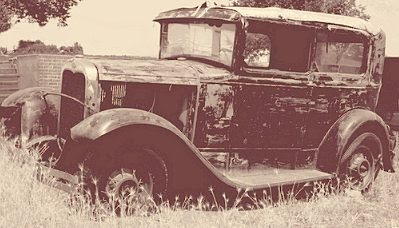 The Baron mentioned what a wonderful time we had at an afternoon birthday party the other day. It was great fun, except for one tiny glitch: I went soaring off my strict low-carb diet, flying through fields of forbidden foods, including large helpings of homemade coffee ice cream.

Meanwhile, the sainted Baron, who has been following the fibromyalgia diet with me in order to help me maintain the rules, limited himself to two bites of that ice cream. Otherwise, he made do with a bowl of our host’s famous chili and a salad. I, on the other hand, had some chili and salad before moving on to sample every forbidden crostini, cracker, chip, and dessert available. Starch and sugar were my middle name.

The result was a carbohydrate hangover of biblical proportions. I suddenly recalled why I’d stopped eating sugar and starches: because when I fall into a dish of crostini — to heck with the dip — the next day’s result is painful remorse. None of the symptoms of alcohol indulgence, just unremitting pain and fatigue in every stressed cell in my body. So, except for a few brief excursions to the computer to write thank you notes, most of my post-party day was spent horizontally, surrounded by pillows to cushion the pain. This horizontal perspective certainly allows for a better view of the wages of sin. In my case, the sins had consisted of cavorting through fields of desserts and other damning dishes of starchy goodness. I had plenty of time to recall Charlie Brown’s plaintive remorse: “the wages of sin are ‘Arrgh!’” Indeed they are, Charlie: angst and arrgh.

Even though pain has a certain eternal feel to it, nothing lasts forever. The wounds of that self-inflicted assault on my metabolism are fading; by mid-week they will be a memory as I move back into regular, predictable pain. So I learned once again that if I want to live a less restricted life, I’d better eat a more restricted diet. Right now the trade-off seems quite rational. Give me three months, put a plate of tiramisu in front of me and I will be deaf to rationality. At the moment, however, be assured I’m all ears.

Before falling into sin I’d been making great progress on our project of simplifying — i.e., cutting down, cutting out, and making do. It’s a good thing we have the example of a former generation to follow but it still takes time to translate their lessons into a modern lexicon. Sure, you can do the easy stuff like eating on the lower end of the food chain. That decision is obvious. But the others are harder.

We’ve never been shoppers, if you don’t count books (and I can count on one hand the number we’ve bought since our financial picture changed). I had fun buying “office couture” for the Baron, but he doesn’t wear those clothes anymore. Not unless he has to go to Washington for conferences and pass for normal. The wardrobe he has now will last a long time, especially if I can talk him out of putting his wallet in the back pocket of his good trousers. That pocket is a bit threadbare — only works if he’s wearing a jacket to hide it.

Most of our other needs can be handled via thrift shops or simply doing without — e.g., the Baron broke his one remaining tie clasp on the safety belt of our car. Since he uses the clasp once a week for the tie he wears to church, a trip to the consignment shop resulted in a serviceable two dollar replacement. Not surprisingly, second hand shops are cropping up like weeds after rain…

Speaking of safety belts on cars, one obvious simplification was to sell one of our two cars.

With neither of us working outside the house now, two cars are about as much use as our office clothes. It was obvious we needed to get rid of one of our vehicles and it was also obvious that his beloved Little Black Bomb, the ‘95 Beretta, was the one to be sacrificed. It has a manual transmission, something I can no longer maneuver with fibromyalgia. And the doors on those small, ‘sporty’ cars (I’m told Berettas are such) are heavy and hard to open.

But giving up that car was like surrendering a talisman. It was one of those vehicles that had few flaws besides age and tattered upholstery. It ran like a charm, surviving even a slipped emergency brake which involved a jolting, driverless ride in reverse down a ridge (veering between two houses and missing a propane gas tank) to land in a clump of bushes, thus avoiding the next destination, which would’ve been the top of the funeral home on the street below. A car towing concern ominously named “Lethal Towing” pulled Da Bomb out of the bushes and the Baron drove it home.

The Little Black Bomb was definitely manufactured under a lucky star.

However, of the two cars we have, it is older and has logged many more miles during the period when the Baron commuted great distances to work. That odometer turned over so many times its real mileage has to be an educated guess. So I looked up the value of a 1995 Chevy Beretta: three hundred dollars. The price was certainly realistic but this was a charmed car. However, tough times call for tough decisions. We added up the cost of maintenance (minimal), insurance, state and county registration costs and decided to bit the bullet: we would become a one car household. However, we comforted ourselves with the fact that we’d be better off financially and could use the money on house repairs.

That was when the Karma Dude showed up. As many of our donors know, I consider the Karma Dude a trickster. I tell them that their generosity will always be returned to them a hundredfold, though it seldom returns in the same form in which it went out. The Cosmos gives back what you need, which isn’t necessarily what you might have wanted. This is the Boomerang Theory of Generosity; your gift always comes back somehow or other.

And it works the other way round, too. When people have been generous it means that one must be generous in return, especially in situations of real need. In this case, the Karma Dude pushed forward a man even poorer than we are. He has two young children and a leaky, fumy, unreliable truck with no seat belts and bad brakes. This was a propitious opportunity, one back-lit with flashing neon signs saying “YOUR TURN, YOUR TURN.” Need I say that sometimes the Karma Dude is annoyingly obvious? Like he thinks we’re stupid or something? Or maybe he figures we’ve been on the receiving end so long we’d forgotten how to give back?

Plans for selling the car went out the window. We reminded ourselves we’d still save on insurance and registrations and repairs, etc. The man showed up with license plates, we signed over the title and he wired the muffler back in place and drove away. We watched the Little Black Bomb until it was gone from sight down the driveway.

If I had any lingering doubts about our decision, they were dispelled when the man returned, his car now fully titled, registered and insured. He made full eye contact, and tears glittered as he thanked us most feelingly for something that seemed to have fallen into his lap out of nowhere. As indeed it had; he didn’t know us, we just happened to find out about him through a mutual friend. The man explained his experience well: you don’t realize how stressed you are until someone comes along and magically lifts the burden from your shoulders. And, yes, his kids loved the car. Knowing that Da Bomb had passed into loving hands just proved further its charmed life.

The first few days of being a one car couple brought on an unexpected concern. Driving to the drug store to pick up a prescription, I suddenly realized I was more vulnerable. In the past, if I had a fatigue attack or something happened to the car I simply called the Baron, called the tow truck if necessary, and waited for the Baron to pick me up. Oops. That wasn’t going to be happening anymore. Now life was to become more complicated. I would have to call a friend for a lift home — after I called the tow truck. As for the fatigue attacks, I’d do what I’d done when the Baron was away. Pull over to a safe spot and sleep for twenty minutes until the blurred vision and weakness passed.

Still, I was blindsided by my failure to take into account ahead of time this new need we now have. We’ll have to rely on others,to ask for favors, even to inconvenience them. The realization was a sobering moment, but it did bring with it a lessening of an underlying anxiety I’d been experiencing since we gave the car away. I now understood its source: life now has to become more careful and more mindful. Given sufficient time, this generosity of ours will seem less like an amputation and more like a smart decision. It was surely a wise one.

I suspect that in the next few years many more families will find themselves in a similar situation. Let’s hope that we all return to the open-handed generosity of those before us who survived their hard times with the graciousness which made them remembered so lovingly.

I’d like to acknowledged the old-fashioned graciousness as demonstrated so lovingly by our donors. Yesterday’s crop included people from the following far-flung places:

A most heartfelt “Thank you!” to everyone.

3 thoughts on “The Wages of Sin and the Karma Dude”