‘Let the jury consider their verdict,’ the King said, for about the twentieth time that day.

‘No, no!’ said the Queen. ‘Sentence first – verdict afterwards.’

‘Stuff and nonsense!’ said Alice loudly. ‘The idea of having the sentence first!’

‘Off with her head!’ the Queen shouted at the top of her voice. Nobody moved.

‘Who cares for you?’ said Alice, (she had grown to her full size by this time.) ‘You’re nothing but a pack of cards!’

At this the whole pack rose up into the air, and came flying down upon her: she gave a little scream, half of fright and half of anger, and tried to beat them off, and found herself lying on the bank, with her head in the lap of her sister, who was gently brushing away some dead leaves that had fluttered down from the trees upon her face.

Unlike Alice, Elisabeth Sabaditsch-Wolff does not have the luxury of waking up from the surreal judicial drama into whose rabbit hole she so recently fell.

Like the Queen and the King of Wonderland, the prosecution and the judge in Elisabeth’s case apparently settled on the sentence long before considering a verdict. Elisabeth’s trial was as nonsensical as that of the Knave. Like Alice, hers was the only voice of sanity in a courtroom full of madmen.

But the rabbit hole goes even deeper than that. The judge in the case, Bettina Neubauer, convicted Elisabeth for saying that Mohammed was a pedophile. There’s only one problem: Elisabeth never said any such thing. As the transcript of her seminar demonstrates, Elisabeth in fact said that “Mohammed had a thing for little kids”, the plain facts of which even the judge was forced to accept. 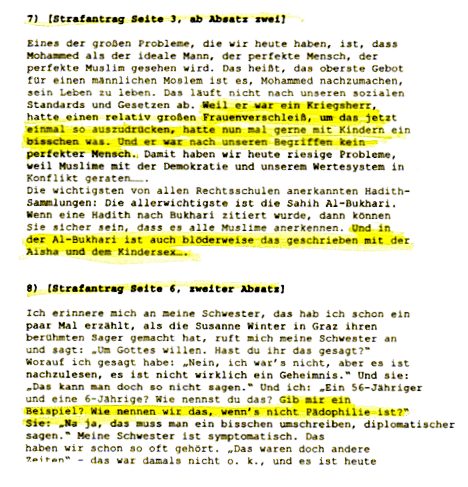 In other words, the judge in Elisabeth’s trial, acting on her own initiative, put words into Elisabeth’s mouth and then convicted her for saying them.

If only The Hon. Neubauer were the Red Queen in a pack of cards!

If only we could all wake up from this feverish nightmare!

Elisabeth did, however, use the word “pedophilia” in her seminar, but only to describe what Susanne Winter had done to earn her own “hate speech” conviction. Elisabeth sent us a note this morning explaining all of this:

In my seminar I described a conversation with my sister.

It was January 2007, I think, and my sister called me about the scandal Susanne Winter had caused by saying what she said. I told her that it was public knowledge that Mohammed had married a six-year-old and consummated the marriage when she was nine. I then said that if this isn’t pedophilia, then what is?

She said, no, you can’t say it that way, you have to word it differently, more diplomatically.

I said, well tell me how. She was silent — she didn’t know.

What’s important here is that I was recounting a story that happened before Winter had been convicted, and it was the only time on record that I actually used the word.

In all other instances I circumvented the word by saying “Mohammed had a thing for little kids”, knowing that Winter had been convicted for saying what she said.

And still, judge Bettina Neubauer called me a “repeat offender” and fined me heavily.

Here are the exact words I was found guilty for [see also the German transcript above]:

Readers should not go by the fine of €480. What’s crucial here is the fact that I was fined 120 “day rates” of €4, because I am a housewife with no income. If I had income, the actual fine would have been much higher. It’s the “day rates” that make the fine a hefty one.

The letter sent to Elisabeth by her lawyer is also apposite to this discussion. Many thanks to JLH for the translation:

As you know, the main trial in the above-named case took place on February 15, 2011.

After your supplemental interrogation, the requests for evidential interrogation of witnesses Wafa Sultan, Hans Jansen and Robert Spencer — previously not dealt with by the court — were rejected, because the court of first instance perceived their statements to be valuations (“subjective assertions”), to the content of which the requested witnesses could contribute nothing. The request to question Ilse Albrecht was refused because she would only have been able to testify subjectively whether she was upset or angry at your comments on Mohammed.

In conclusion the welcome verdict was announced: You were exonerated of the charge of incitement according to § 283 StGB. The court found your statements on Islam permissible in the sense of Art 10 MRK, since according to this regulation criticism must be made in a provocative manner. Our arguments were agreed to in their entirety.

You were found, however, to have committed the offense of § 188 StGB (denigration of a religion) because of your statements in the seminars of October 15, 2009 and November 12, 2009 about Mohammed and his sexual intercourse with nine year-old Aisha. The judge’s basis for that focused on the circumstance that the offense of § 188 StGB is an abstract criminal threat, and therefore the mere aptness to cause offense was sufficient to qualify as the crime. What was incomprehensible was the judge’s conclusion that Mohammed’s sexual contact with nine-year-old Aisha was not pedophilia, because Mohammed continued his marriage to Aisha until his death.

Punishment was set at 120 per diem payments of €4, in total €480 or an alternative sentence of 60 days imprisonment.

Further, the costs of the trial must be paid.

The verdict does not have the force of law. since we as well as the prosecutor have announced the intention to appeal by reason of invalidity and because of the remarks about culpability and sentencing.

We have four weeks after receipt of the copy of the verdict to execute the appeal.

With warm greetings, I remain

Take a deep breath, everyone, and think about the implications of the above material.

Elisabeth Sabaditsch-Wolff was convicted for stating the plain facts: the prophet Mohammed had sex with a nine-year-old-girl. She never used the word pedophilia; she simply described in everyday language the prophet’s… ahem… tastes.

The statements she made are not considered false by observant Muslims. They are written down in Islamic scripture, and are considered correct and authoritative by virtually every Islamic scholar and theologian.

These scriptural passages are not considered offensive to Muslims when they are recited in a mosque or a madrassa. Mohammed was the perfect man, so by definition his actions cannot be offensive. They are in fact exemplary. That is why Muslim men continue to marry little girls to this day.

Elisabeth’s statements are offensive because they were made by a non-Muslim in public, and brought discredit upon Islam in the eyes of other non-believers.

This offense is referred to as “Islamic slander”, and is a grave violation of Islamic law. Under sharia, the penalty is death.

But it is only illegal under sharia.

Monday’s verdict had nothing to do with Austrian law, or European law. It was based solely on the unwritten laws of politically correct Multiculturalism, which absolutely forbids the offending of Muslims.

This entire judicial farce was necessary in order to establish a sharia-based precedent in Austria. Whether Bettina Neubauer realizes it or not, her role in the case was to enforce Islamic law in the country formerly known as Austria.

Welcome to the Caliphate.