A few weeks ago, in the aftermath of the shooting of Gabrielle Giffords in Arizona, Democrats and the media blamed Republicans and “tea partiers” as indirect contributors to the tragedy. The “overheated political rhetoric” created by right-wing talk radio and Tea Party events was said to create a “divisive climate” that helped cause the violence

For the last week or so there has been a standoff in Madison, Wisconsin over the state legislature’s proposed withdrawal of collective-bargaining privileges for public sector unions. The issue has inspired a lot of nasty rhetoric from the leftish side of the political spectrum, and union goons have descended on the state’s capitol building, egged on by President Obama and other prominent Democrats. There have been violent incidents, and some thinly-veiled threats on the part of various union leaders and Democrat politicians. 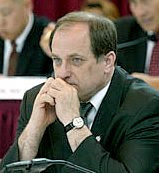 Congressman Michael Capuano (D, Massachusetts) was among the prominent decriers of right-wing hatred and incitement. Now we come to find out that incitement to violence is perfectly OK, as long as a Democrat is doing the inciting. Who would have guessed?

BOSTON (FOX 25 / MyFoxBoston.com) – Throngs of union supporters shut down Beacon Street in front of the Massachusetts Statehouse on Tuesday to show solidarity with public employees in Wisconsin.

The protest grew tense at times as both sides shouted at each other.

U.S. Rep. Michael Capuano rallied the crowd, calling the battle to save collective bargaining rights “a fight for the middle class.”

During the event, Capuano also said “Every once and awhile you need to get out on the streets and get a little bloody when necessary.”

Whoops! Good thing a Republican didn’t say that. For a Massachusetts Democrat, however, it’s no big deal — when you watch the video, you’ll see how much the crowd loved it.

Many thanks to Kitman for Youtubing this news clip from FOX 25 TV:

Rep. Capuano immediately felt compelled to backpedal a bit and regret his poorly-chosen words. According to The Boston Globe:

US Representative Michael E. Capuano, who decried violent political rhetoric after last month’s fatal shooting rampage in Tucson, said today he regrets urging union workers at a rally in Boston on Tuesday to “get a little bloody.”

“I strongly believe in standing up for worker rights and my passion for preserving those rights may have gotten the best of me yesterday in an unscripted speech,” the Somerville Democrat said in a statement released this afternoon. “I wish I had used different language to express my passion and I regret my choice of words.”

His remark raised eyebrows because Capuano was among the lawmakers who were calling for cooler political rhetoric after his Democratic colleague, Gabrielle Giffords, was shot in the Tucson rampage that killed six other people last month.

At the time, Capuano had said the shooting was probably inevitable because of the nation’s increasingly heated political rhetoric.

My intuition says that Mr. Capuano will not face much political fallout for his… umm… indiscretion. He is, after all, a Democrat in the state of Massachusetts. Any Republican who issued such “incendiary rhetoric” would have been forced to resign from Congress by now, but the rules for Democrats are different.

This incident will soon be old news, and anyone churlish enough to bring it up tomorrow will be reminded that it’s time to “move on”.

4 thoughts on “Democrats Wish for Blood in the Streets”