Our English correspondent Seneca III sends this brief and whimsical message for the new year:

The Mohammed Coefficient and the Great Unanswered Questions

A belated Merry Christmas to all GoV readers and a couple of thoughts for the coming year. 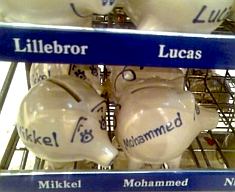 Firstly, I am of a mind that the values of the Mohammed Coefficient as oft iterated on this blog are grossly underestimated. By registering only the name ‘Mohammed’, and not taking into consideration its derivatives, the percentiles as given seriously underestimate the magnitude of the problem.

By derivatives I mean the singular nouns such as Hamed, Hamad, Hamoud, Hamdan etc. and collective nouns such as Hamas (Hamanegg was actually the name of a famous Carthaginian breakfast dish so it doesn’t count) and were they to be included in the count I feel the coefficient would rise quite significantly.

Secondly, being of a somewhat mischievous inclination and having reeled those names off of my tongue several times, it occurred to me that the time may have come for an addition to the pantheon of Great Unanswered Questions of which, for those of you not familiar with the GUQ, I offer the following examples:

and, consequently, I propose to add the following:

9 thoughts on “The New Year Comes With Ham”