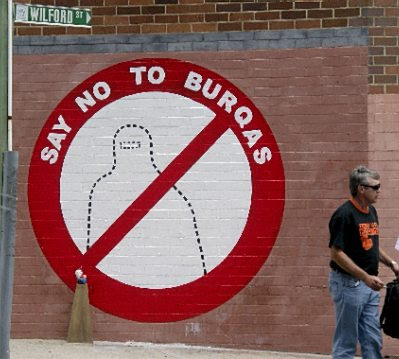 Sergio Redegalli, the Australian artist who found himself under siege due to the “Say No To Burqas” mural he painted on the wall outside his studio (see the most recent report here) has issued a statement. His message was published as a paid advertisement in The Inner City Weekender, January 28, 2011 (it’s tomorrow already in eastern Australia):

Newtown in the last 30 years has been on the leading edge for the creative arts, with many successful artists not just working in the area but committing to making Newtown their home.

This page is a step in clearing up some untruths spread about the ‘Say No To Burqas’ mural (‘the mural’) by a very small number of people.

The ‘Say No To Burqas’ mural was painted to create dialogue and to hopefully encourage people to be better informed about some very important issues currently facing Australia today.

As Australian Citizens we all have a duty to stand up and express ourselves on issues that are important to discuss and to do this always in a sensible and peaceful manner. We all have the right to express ourselves non-violently both verbally and creatively, via any form of media format without having to be fearful of physical abuse or vandalism to property.

There have been too many untruths made by people and groups who take very much care in not putting their names (as individuals as well as groups as a whole) to their beliefs.

Firstly, the ‘Say No To Burqas’ mural has always and only been a starting point for debate and discussion, aside from graffiti and vandalism, it has never had the wording painted saying anything other than ‘Say No To Burqas’.

Islam is more than a Religion; it is in fact a system of rule that guides all devout Muslims throughout their lives from the time of their birth to their death. Apart from its Religious element that most Western people understand the concept of, it also has a very clear and fixed set of legal rules, for almost every event in a Muslim’s life (Sharia).It also has a political system within its structure clearly describing the aims, desired and results that would be the most beneficial for the expansion of Islam. I personally have discussed these sections with my Australian Muslim friends and I encourage anyone interested in understanding Islam to read more about the challenges facing Australian Muslims and the problems that they are facing because of minority groups who have extremist views that do not represent the greater Australian Muslim population.

Extremism does exist; every time any we fly overseas we are exposed to the measures that airport security under take to combat this risk. This year, the majority of Australian Coptic Christians had their Christmas celebrations cut short due to terrorism threats made towards them for their celebrations held on the 7th January 2011, after several Sydney Churches were targeted. (Terror threats sour Coptic Christmas services). The list goes on.

One very important fact for all Australians to understand is that the burqa and niqab are not a necessary part of Islam. This ruling was made clear to all Muslims around the world by Sheikh Mohamed Tantawi, the dean of al-Azhar university, when he stated that “full-face veiling (is) a custom that has nothing to do with the Islamic faith”. (Egypt’s highest Muslim authority has said he will issue a religious edict against the growing trend for full women’s veils, known as the niqab).

An important reason for a law to be passed in Australia regarding all forms of full-face covering worn in public spaces, is that we live in a land where reasonable rules make more sense. We as Australians like being one united country, not a divided one. We have rules that we have all been following in the past, not because they are Law, but because they give all people a feeling of safety. Australians understand that taking off our motorcycle helmets in banks and other sensitive areas is a normal practise, that people walking the streets with their faces fully covered for no apparent reason is out of the norm.

Australians have worked very hard in creating a balanced and non discriminative society. Let’s not let our good will be used against the common good of all Australians. This issue is not about the clothing, it is about the direction of Australia, and the type of community we wish to live in, one that is clear about what is suitable in Australia and what is not. We have rules that clearly state that public nudity is not appropriate and creating rules that state that 100% full-face coverings in public spaces are not appropriate is just as balanced.

Some people may say it is the right of a woman to make a choice of covering themselves 100%, however I ask one very simple question, who is going to protect and allow for the freedom of choice to the next generation of young girls born into these family groups that will control all aspects of their dress code, education and the types of friends they will be allowed to know.

12 thoughts on “Sergio Redegalli Speaks Out”