I wrote last week about the spam we’d been receiving from John Boehner, the new speaker of the House of Representatives. I designate these unsolicited emails as “spam” because the “unsubscribe” option they contained was nothing of the sort — it led to a form designed to act as a catchment for live email addresses, which is a common feature of a spam operation. Rather than take the “unsubscribe” bait, I blocked all emails from the given address at house.gov.

I also predicted that Mr. Boehner, like any other spammer, would probably circumvent my block by emailing us from a different address. And now he has done exactly that: today’s spam (“Chairman Paul Ryan to Deliver Republican Address to the Nation on January 25 — Speech to immediately follow President Obama’s State of the Union”) from the Speaker of the House came from a different address, SpeakerBoehnerPressOffice@mail.house.gov.

Needless to say, the “unsubscribe” option led to the same sneaky form (http://speaker.gov/Forms/EmailSignup/?Delete=true&MessageID=xxx&Email=xxx@xxx), which looks like this: 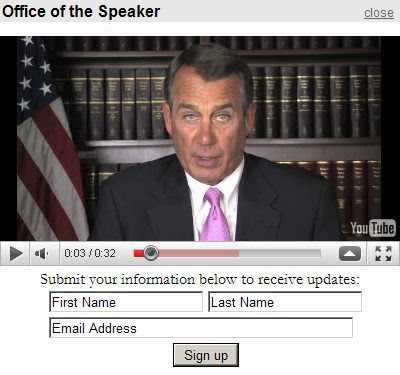 Go ahead fill out the form, I dare you — give them your name and email address. That will serve to verify you as a conservative “warm body”, and you’ll be spammed to death by dozens of Republican party organs and affiliated groups for years to come. I guarantee it.

Interestingly enough, this email came through our spam filter with a fairly high spam score — not high enough to force it into quarantine, but much higher than the scores typically assigned to personal emails or messages from lists we actually subscribe to. The high rating was primarily due to this item:

So the official email address for the Speaker of the House is listed in one of the major spam databases. Nice going, Mr. Boehner! An impressive accomplishment, just three weeks into your new job.

I can’t tell you how much this intensifies my loathing for the Republican Party. One expects this sort of low-life scummy behavior from the Democrats, but the Republicans would like us to believe they provide a civilized alternative.

A plague on both your houses!

5 thoughts on “No One Unsubscribes From Boehner!”