Pain, Pleasure and Prejudice
The Complete Layman’s Guide to the Koran 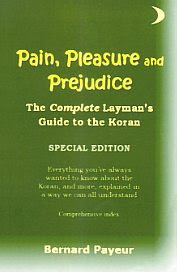 I’ve just finished reading Pain, Pleasure and Prejudice by the Canadian scholar Bernard Payeur, and the book is exactly what it’s touted to be: “everything you’ve always known about the Koran, and more, explained in a way we can all understand”.

Dr. Payeur’s original field is not Islamic studies, so he approaches his task as an intelligent outsider. The result is a thorough and comprehensive view of what the Koran actually says, organized in several different ways to provide insights into what it all means. In addition to the Koran itself, the author has read the hadith and various commentary by Muslim theologians, so the book reflects the established Islamic institutional understanding of what Islam’s holy book means.

Before examining the contents of Dr. Payeur’s work any further, I feel compelled to warn potential readers that the book is riddled with typos. It’s a pity that a copy editor wasn’t engaged to undertake a final edit before the text went to press, because there are typographical errors on virtually every page — interpolated or missing letters, homonyms used by mistake, errors in punctuation, or simple typing mistakes. In most cases the reader can easily determine the intended text, but one should be particularly careful using the cited quotes from scripture — they were evidently transcribed by hand, and there are numerous embedded typographical errors.

Leaving aside the typos, this book is an essential resource. Dr. Payeur tackles his topic with a light, ironic, and slightly whimsical attitude, which makes the passages between the scriptural quotes entertaining as well as informative. And the scriptural quotes form the main focus of the book — the author packs its five hundred pages with as many ayats as he can manage while still allowing room for interpretive explanation.

What is noticeable in all this Koranic verbiage is the book’s overwhelming preoccupation with and emphasis on the horrific punishments that will be inflicted on sinners and non-believers in the afterlife. The Koran does occasionally describe the paradise that awaits the faithful Muslim, but such verses are fairly general and nebulous in tone — the lucky believer gets to lie around on couches in the shade, have sex with magically refreshed virgins, eat tasty fruit, and drink special wine. And he is granted the special pleasure of observing the infidels roasting in hell’s eternal barbecue. But that’s about it.

In contrast, hundreds of verses are devoted to describing in passionate detail the suffering of the damned. They are to be roasted over fires whose fuel consists of other unbelievers. They are to be torn apart, gutted, and otherwise tortured. Special punishments are listed for Christians and Jews who refuse to acknowledge the supremacy of Allah. Women in particular are described as over-represented among the sufferers in hell.

The rest of the Koran is a bizarre hodge-podge of generalities and incomprehensibilities mixed with elaborately detailed prescriptions for certain legal or ritual practices. As an example, here is a portion — just a partial selection, mind you — of Allah’s pronouncements on the matter of divorce, as described by Dr. Payeur (pp. 153-156):

As mentioned earlier, a man may also marry a woman who is married to another man as long as that other man’s wife is your slave: “Or married women except those your right hands possess … (4:24). If a man is unhappy with any of his matrimonial choices, getting out of a marriage agreement under Koranic law is probably easier than any other type of contractual arrangements. A marriage contract, unlike other contractual arrangements, is a one-sided affair, which can be terminated at the discretion of the male signatory. The soon-to-be-divorced wife cannot object to the unilateral breaking of the marriage contract by her husband.

Making things even less complicated, for the husband that is, he doesn’t need a reason to divorce any of his wives or obtain anyone’s permission to do so. He simply has to tell her “I divorce you” and wait until his soon-to-be-divorced wife has experienced three menstrual cycles and it’s over. For a woman it is a little more complicated. She can, however, simplify the whole process and remain in Allah’s good books if she agrees to pay her husband a ransom which usually involves returning much of what he has ever given her to gain her freedom.

2:229 Divorce may be pronounced twice. Then they (women) are to be retained in a rightful manner or released with kindness. And it is unlawful for you [men] to take back anything of what you have given them unless both parties fear that they cannot comply with Allah’s Bounds (by obeying His commands). If you fear that they cannot do that, then it is no offence if the woman ransoms herself [pays money to be set free]. Those are the bounds set by Allah. Do not transgress them. Those who transgress the bounds set by Allah are the wrongdoers.

“Divorce may be pronounced twice” in the preceding verse means that the husband can divorce his wife three times. If he divorces her a third time he can never take her back. A divorced woman is expected to leave the family home after experiencing her third menstrual cycle after being informed by her husband that they are no longer husband and wife. Her former husband can allow her to stay longer if he wishes, as long as it is not for ulterior motives, for example to obtain larger ransom.

2:231 If you divorce [your] women and they reach the end of their [waiting] period, retain them in an honourable manner or release them in an honourable manner. Do not, however, retain them for the sake of causing them harm and in order to commit aggression (by forcing them to ransom themselves, or by retaining them for a longer period). Whoever does that shall do wrong to himself. Do not make a mockery of Allah’s Revelations; and remember the Grace Allah has bestowed upon you, and the Book (the Koran) and the wisdom He has revealed to you in order to admonish you. Fear Allah and know that He knows everything.

I am assuming the following is not for the Prophet only.

65:1 0 Prophet, if you divorce your women, divorce them when they have completed their menstrual period. Calculate the period and fear Allah your Lord. Do not drive them out of their homes, and let them not go out, unless they have committed a manifest foul act. Those are the bounds of Allah, He who transgresses the bounds of Allah has surely wronged himself. You do not know, Allah may perhaps bring about something new after that.

How long should you retain a woman or a girl who is not menstruating such as a child-bride or who is pregnant?

65:4 As for those of your women who have despaired of menstruation, if you are in doubt, then their term shall be three months; and those too who have not menstruated yet. As to those women with child, their term shall be upon delivering their burden. He who fears Allah, Allah will grant him relief in his affair.

Allah is unclear, apart from that ransom thing, as to how a believing woman can get a divorce if she doesn’t have the money to buy her freedom. Maybe that is why in countries that are governed by the Koran it is a matter decided by religious courts operating under the Sharia or Islamic Law, the law derived from the Koran and the sayings and example of the Prophet Muhammad. A woman seeking a divorce will usually appeal to an all-male Sharia Tribunal stating her reason for wanting a divorce. It must be a compelling reason for a divorce to be granted. She must also agree to give up all or part of her dowry, the amount dependent on her reason for seeking a divorce, as compensation to her soon- to- be-divorced husband.

Under Islamic Law, the divorced mother usually gets custody of any sons under seven years of age and daughters who have not reached puberty. When sons reach the age of seven and daughters reach puberty (have become valuable commodities) custody usually reverts to the father.

Can a divorced couple get re-married? Yes, if the former wife, in the interim, has married and been divorced by another man. The most current former husband should not interfere with a former wife’s plans to marry a former spouse.

2:230 If he divorces her, she shall not be lawful to him again until she has married another husband. If the latter divorces her , then it is no offence if they go back to each other, if they both think that they shall keep within Allah’s Bounds. Those are Allah’s Bounds which He makes clear to men who have knowledge.

2:232 If you divorce your women and they reach the end of their [waiting] period, do not prevent them from marrying their [former] husbands if they agree among themselves in a rightful manner. With this are admonished those who believe in Allah and the Last Day; it is better and more decent for you. Allah knows and you do not.

Some of the most specific and detailed instructions in the Koran are reserved for topics that were of great personal interest to Mohammed. For example, the prophet developed a libidinous interest in his daughter-in-law after chancing to glimpse her partially naked. For him to marry her would have been considered incest under the existing traditions of the Arabs. But Allah helped Mohammed find a loophole: the young woman’s husband was Mohammed’s adopted son, so Allah sent a revelation to the prophet explaining that the rules had been changed: an adoptive son was henceforward to be considered equivalent to a brother, rather than a son. Therefore incest was no longer an issue. The young lady was duly divorced, and Mohammed married her.

This and many other Koranic verses are devoted to what seem to be very narrow issues particular to the time, place, and interests of Allah’s Messenger. Eternal punishments for specifically-named enemies of Mohammed are prescribed in detail. Divine revelations present the terms of settlement for certain conflicts among the companions of the prophet. Allah’s revealed law contains numerous details that coincidentally served to benefit the 7th-century Arab brigands that made up the principle entourage of Allah’s beloved Messenger.

The Koran is also alleged to be a divine and eternal book, whose master copy, known as the “Mother of the Book”, is carved on a golden tablet in Paradise. If we accept this assertion at face value, then how did all those finicky details relating to Mohammed and his cronies end up in the book?

Rather than an eternal compendium of divine wisdom, the Koran resembles Mohammed’s pocket planner, in which Allah conveniently inscribed useful information on appropriate dates. Mohammed had but to consult this handy resource from time to time, and recite to his assembled followers what was specified for the occasion. Nothing that served his interests was left uncovered.

With its exhaustive index, Bernard Payeur’s book makes an excellent reference manual for specific Koranic prescriptions and instructions. For instance, to find the exact reference to the “Mother of the Book”, I consulted “Koran — Mother of the Book” in the index and found the sura and verse (13:39).

However, before using the cited verses, the reader is advised to keep in mind the likelihood of typos, as mentioned at the beginning of this review. Once one has obtained the sura and verse, it’s a simple matter to look up the relevant passage online or in the library, so that any misspellings may be easily corrected.

For Counterjihad activists, Pain, Pleasure and Prejudice: The Complete Layman’s Guide to the Koran deserves a place on the bookshelf alongside Reliance of the Traveller and the works of Bat Ye’or, Andrew Bostom, and Robert Spencer.