Gates of Vienna is pleased to welcome a new Czech correspondent, Benjamin Kuras. His first contribution is a report from Prague on last night’s demonstration in Wenceslas Square against the worldwide persecution of Christians.

It’s gratifying to note that the demonstrators recognized the common cause shared by Jews and Christians against the danger of Islamic expansionism, and identified political correctness as the debilitating disease that has allowed radical Islam to infect a weakened Europe. 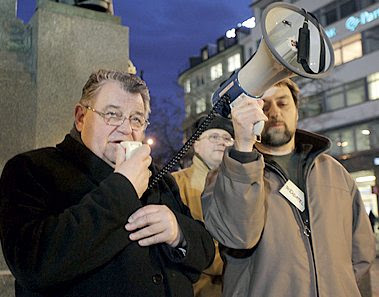 Protesting the Persecution of Christians
by Benjamin Kuras

Some 3,000 signatures were collected in a week under an appeal to the Czech government to pay attention to the persecution of Christians and consider granting asylum to at least some of the worst affected Iraqis. The campaign, organised by the Young Christian Democrats (the youth branch of the small parliamentary Christian Democrat Party) and supported by a dozen Christian, Jewish and civic organisations, culminated on Tuesday 18 January in a Wenceslas Square demonstration attended by some 200 people.

Small but select. A line of renowned speakers was headed by Prague’s Catholic Archbishop who used the words “well-planned extermination amounting to genocide” and reminded the audience that “the map of the democratic world is identical with Biblical civilization”. He welcomed the participation of “our brothers of the Mosaic faith” who opened the meeting with blasts of the shofar (the ancient Biblical ram’s horn). The Archbishop emphasized that anti-Christianism and anti-Semitism were now closely related and that Christians and Jews must support each other.

Catholic Bishop Vaclav Maly, popular ex-dissident jailed by the Communist regime, reported on his recent visit to Iraqi Christians and warned of the threat of radical Islam, but spoke also of Christians persecuted in China and North Korea. The new Chairman of the Christian Democrat Party announced that he was appealing to the government to take action in support of persecuted Christians.

The threat of Islamism in Europe, fueled by political correctness, was highlighted by the Chairman of the ecumenical Christian International Solidarity, the Chairman of the Civic Institute (who is also the Prime Minister’s adviser on human rights) and the Chairman of the small non-parliamentary Conservative Party who also pleaded for solidarity with Israel as an outpost of Western civilization. The Chairman of the Christian Evangelical Alliance accused the media of a malicious bias in over-reporting a case of a preacher wanting to burn the Koran while keeping silent for years about church-burning in the Islamic world.

A popular writer and columnist appealed to liberals and secularists to join the campaign alongside Christians and Jews, since they were as much under threat. Quoting Niemöller’s famous “I did not defend them against the Nazis because I was not one of them — and when the Nazis came for me, there was no one left to defend me,” he reminded everyone that human indifference is the quisling of all persecutions.

Even though a respectable hard core of well-placed freedom defenders has undoubtedly arisen from this campaign, indifference still rules. With their small and barely visible Muslim community of not much more than 10,000, most Czechs would guess that hijab, niqab, and burqa are some Lebanese delicacies.

7 thoughts on “Czechs Demonstrate Against the Persecution of Christians”