During the course of our journey as the keepers of this blog, our understanding of the great foe to Western culture has grown and changed over time. As we have struggled to come to grips with the alien nature of Islam, many of our hopes have been laid aside. Some have been brutally hacked away. For example, the myth of the moderate Muslim was a hard notion to let go. When it left, the idea that Islam could be ‘reformed’ (in the sense that Judaism and Christianity have experienced) followed soon after.

Sure, there are secular Muslims, but when push comes to shove it is not they who are in charge of Islam. And their cloak of moderation can be deadly for themselves in the face of their masters. Look at any country ruled by Islam and you will see corruption and bloodshed. It is not only the borders of those countries that are bloody: the citizens within do not live, cannot live, in a manner commensurate with what Westerners believe to be basic human liberties.

With Islam, the Law prevails, and the Law is not merciful. Nor is it just. We all know the insane instances of applied sharia law in which raped women are beaten by the authorities for their “sins”.

This law can be twisted into pretzels that would make the Jesuits blush. From The Washington Times comes a news item that won’t surprise anyone who has studied the issue for long:

The latest edition of al Qaeda’s online, English-language magazine includes an article offering an Islamic justification for extremists to steal from non-Muslims to finance their activities…

Yes, even that paper calls them “extremists”. Through sad experience, that’s not a word we believe any more. It’s the terrorists, stupid. Stealing in the name of Allah’s Ummah is cool, according to these terrorists – and to the many, many “moderate” Muslims who contribute to the cause. 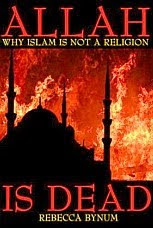 Now comes a book that exactly lines up with the way our thinking has evolved at Gates of Vienna. Rebecca Bynum nails it in Allah Is Dead: Why Islam is Not a Religion. I’ve been saying this for a while now so it’s exciting to see that someone has written a book laying out systematically what it took us so many years to understand, to wit: Islam is a totalitarian system tricked out to look like a religion, and it fools even many of its adherents. In reality, Islam is a prison – as those who try to leave know all too well. You wonder sometimes what would happen if Islam’s so-called ‘apostasy’ were done away with? How many adherents would still be in the system? Especially I wonder how many women would remain if they were free (as in really free from physical retaliation) to get on the bus, Gus.

Allah is Dead is due for release in February, but it can be ordered now from Amazon. That page has a pre-review from Ms. Bynum’s cohort at The New English Review, Hugh Fitzgerald:

For many, the word religion commands immediate respect. In the American context, that word implicates the most important Constitutional protections. But is the ideology of Islam accurately, or helpfully, defined as a religion? Is that word, as understood in the Western world, properly applied to Islam, or does it help to hide a reality that needs to be understood? These are the questions that Rebecca Bynum asks, and to which she offers answers, in this, the first book-length investigation of how to most accurately describe or define Islam. [my emphasis]

Finally, someone has done it! By ‘it’, I mean given us a working definition of this utopian scheme that lays aside any theological pretensions in order to examine the ugly reality. All Utopias are misconceived, but none has been so brutal as this one.

Now, as all of us in the Counterjihad labored to come to terms with what our enemy means, we have been supplied serendipitously with a most necessary definition of what it is we fight. Interestingly, Ms. Bynum has arrived at the very point we were struggling to achieve. From all indications regarding her book, she has given us the perspective we need to more effectively do battle against this latest Destroyer.

I look forward to reading her book, to having the satisfaction of feeling, “yes, that’s it. She’s nailing it”. As the editorial description at Amazon puts it:

…Bynum maintains Islam s current status as a religion, along with all the other religions of the world, is in error. She refers to Islam as the duck-billed platypus of belief systems and proposes it should be classified accordingly; as the hybrid religio-socio-political belief system it is. She also reminds the Western world about what religion itself actually is, not the caricature modern analysts often mean when they refer to “religious fundamentalisms.” Bynum has given policy-makers a powerful tool for dealing with Islam. Let us hope they understand, and grasp, and choose to make use of it.

Soon after the book arrives, expect to see a post about it. In fact, if you order and read the book and want to write your own review, please send it to us for consideration as a post.

We fight more effectively when we can name the enemy. Thus, we can say with fair certainty, given the evidence, that Islam is a political system of brigandry with a veneer of pious-sounding rules. Do a little digging past that ‘piety’ about killing all the Jews and find the blood-soaked history behind the façade.

No wonder Islam annihilates any history but the one it writes.

No wonder it issues death threats against anyone who says otherwise.

No wonder so many people have died because of this plague on humanity.

18 thoughts on ““Allah Is Dead: Why Islam is Not a Religion””