There are two major currents in the today’s news.

The first involves the ongoing tremors from the diplomatic cables released by WikiLeaks, which continue to rattle political leaders all over the world. The second is the sixty-ninth anniversary of the Japanese attack on Pearl Harbor.

Both currents have been brought together by Srdja Trifkovic in a commemorative essay for Chronicles. Some excerpts are below: 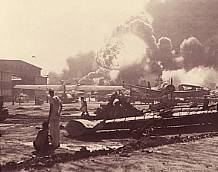 Over two thousand four hundred American sailors, soldiers and airmen were killed in Pearl Harbor 69 years ago today. Had we had an equivalent of WikiLeaks back in 1941, however, the course of history could have been very different. FDR would have found it much more difficult to maneuvre the country into being attacked in the Pacific in order to enable him to fight the war in Europe, which had been his ardent desire all along.

One leak—just one!—almost torpedoed Roosevelt’s grand design. In mid-1941 he incorporated the Army’s, Navy’s and Air Staff’s war-making plans into an executive policy he called “Victory Program,” effectively preparing America for war against Germany and Japan regardless of Congressional opposition and the will of the people. His intention was to lure public opinion into supporting the Program because the increase in weapons production promised meant more jobs and a healthier economy. A supporter of the America First Committee, Senator Burton K. Wheeler, obtained a copy of the Victory Program, classified Secret, from a source within the Air Corps, and leaked it to two newspapers on December 4, 1941, the Chicago Tribune (a serious newspaper back then) and the Washington Times-Herald (long defunct). Vocal public opposition to the plan erupted immediately, but ceased three days later, on December 7, 1941. Congress soon passed the Victory Program with few changes. The Japanese performed on cue.

Imagine the consequences had the Chicago Tribune and the Washington Times-Herald published a series of other leaks over the preceding few months, including the following:

Berlin, 27 September 1940. U.S. Embassy reports the signing of the Tripartite Pact, the mutual assistance treaty between Germany, Italy, and Japan: “It offers the possibility that Germany would declare war on America if America were to get into war with Japan, which may have significant implications for U.S. policy towards Japan.”

Washington, 7 October 1940. Having considered the implications of the Tripartite Pact, Lt. Cdr. Arthur McCollum, USN, of the Office of Naval Intelligence (ONI), suggests a strategy for provoking Japan into attacking the U.S., thus triggering the mutual assistance provisions of the Tripartite Pact and finally bringing America into war in Europe. The proposal called for eight specific steps aimed at provoking Japan. Its centerpiece was keeping the U.S. Fleet in Hawaii as a lure for a Japanese attack, and imposing an oil embargo against Japan. “If by these means Japan could be led to commit an overt act of war, so much the better,” the memo concluded.

Washington, 23 June 1941. One day after Hitler’s attack on Soviet Russia, Secretary of the Interior and FDR’s advisor Harold Ickes wrote a memo for the President, saying that “there might develop from the embargoing of oil to Japan such a situation as would make it not only possible but easy to get into this war in an effective way. And if we should thus indirectly be brought in, we would avoid the criticism that we had gone in as an ally of communistic Russia.”

Mr. Trifkovic lists a number of other cables leading up to that infamous day. Go over to Chronicles to read the rest — which, as the author points out, is history.