Our South American correspondent BG suggested that we republish the following post by Miguel, the founder of the Venezuelan Resistance blog site The Devil’s Excrement. 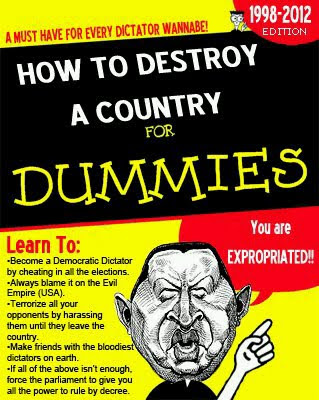 Slowly Hugo Chavez is building up his Dictatorship. He has been planning ahead all the time.

Lost the Constitutional referendum? He quickly had himself an Enabling Law that allowed him to legislate in 2008 everything but his own reelection by decree, thus voiding what the “people” had voted for. He dealt with his reelection by holding an illegal referendum that would allow him to run in 2012 and forever if necessary, he had the Supreme Court ready to approve it in an another subtle but illegal decision that denies the very essence of our Constitution and democracy.

Then, in the face of the 2007 referendum defeat, he rearranged electoral districts so that he could win the National Assembly even in defeat. It almost worked, except that he did not cheat enough and lost more popularity than he imagined he would in the intervening two years. In the end, he did not manage to obtain the super majority that would have allowed him to have the Assembly approve him any Bill he wanted.

Thus, he made a three step maneuver, one for the present, one for the immediate future and one for a year and a half from now.

For the present, he had the lame duck National Assembly approve a succession of Bills that change the social landscape in a dramatic fashion, from the Banking Bill, to the Science and Technology Bill, to the Telecom Bill, to the Media Bill, to the University Bill, Chavez legislated precisely what the majority that voted against him did not want. It was undemocratic, unfair and much of it illegal.

Then, to take care of the immediate future, he had the same National Assembly approve him an Enabling Bill that it is not only undemocratic, the old Assembly was legislating beyond its own mandate and violating the mandate of the new one, but gave Chavez essentially Dictatorial powers, just when the people voted clearly to limit or stop his powers. It was, and is, a legislative coup d’état that makes Hugo Chavez Dictator for eighteen months and castrates not only the newly voted Deputies, but the voters that asked for Chavez to be stopped. And these voters were a majority in the September Parliamentary election.

And as if this was not enough, that same Assembly approved a Bill for Political Parties that prohibits anyone elected under the slate of a political party, to vote differently than that party in the National Assembly. Talk about totalitarian control. Deputies have no conscience, no independence, no criteria, they have to vote in the manner in which the party and its hierarchy says.

So much for Chavez’ “participatory Democracy”! What a farce!

The question is at this time, why was this approved? What card is Chavez playing long term, that he wants to make sure that not a single one of the Deputies elected under his party and that of the PCV (Communist Party) can turn against him?

Since he does not have a super majority (two thirds of the Assembly), that can’t be it. He does not need them to convoke another Constituent Assembly, he can do that on his own. He does need them to approve another Enabling Bill, but what use is that instrument six months before a Presidential election?

It does insure him a majority in the Assembly, but once again, what use is that? If Chavez is facing a sure defeat in 2012, not having a majority will almost be an irrelevant question. But the eighteen month timing has to have a key ingredient in it. Simply control rebellion within his own ranks?

In the face of the 2012 elections, Chavez has to deal two possible scenarios: That he could win or that he will go down in defeat. If he can win, he will go forward with the election. He will risk it all to obtain even a marginal victory that would give him the appearance of democracy, the same way he has claimed to be a democrat in the last few years. And if all fails, he will just not hand over power and end the travesty once and for all. Dictator for life!

In the same manner, if the election looks tough, he will call for a Constituent Assembly that will stop the upcoming Presidential election and allow him to rule until the whole process is completed. He will use the redistricting to have a majority in the Constituent Assembly. He will legislate at will and play it by ear to make sure he can be the first President under the new, more controlling and more limiting Constitution.

Either way, Hugo Chavez would have built himself his Dictatorship one step at a time under the watchful eye of all of those fake organizations that have looked the other way as he trampled over the Venezuelan Constitution and its people over the last few years.

All done one step at a time and under the banner of democracy.

5 thoughts on “Venezuelan Dictatorship for Dummies”