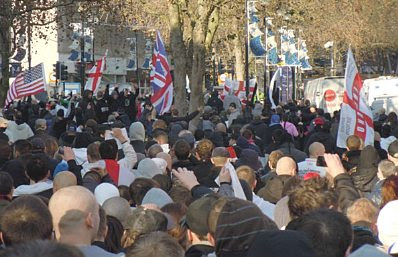 
Due to the breaking news about the Stockholm bombing, we had to delay the reporting on the English Defence League demo in Peterborough. The event was a great success — good weather, few counter-demonstrators, cordial relations with the police, and inspiring speeches.

The desecration of Winston Churchill’s statue and the Cenotaph in London may have marked a turning point for the EDL. They were they ones who reacted strongly against it and mobilized volunteers to clean up the graffiti and other damage, and the police recognize their efforts. We’ll have more on that later.

Below is a report by CV, an American visitor to England. He was able to attend part of today’s demonstration in Peterborough, and sent this report:

Here’s a brief account of what I saw. Most of this can be classed as impressions, and little more than that.

Fact: the opposition march was utterly anemic, and was characterized by middle-aged men yelling at the police and calling them Nazi fascists. It was definitely a union march, not a student / UAF / MDL march, and by my count did not exceed 500 people.

Fact: the police outnumbered the opposition. Police everywhere, in every form. After I left I dipped into a store nearby and there were some locals talking. One said to the other that he had never seen so many senior police officers present — the equivalent of commissioners in the states. In uniform, on the streets with the police. I had noticed the same, it was good to hear it confirmed by someone more familiar with the scene.

Fact: the EDL I talked to were reluctant to talk to me, even with a few pints in them. I introduced myself to them as a Yank here with visiting forces, wanting to understand what the EDL were working to achieve with this march? It took a lot of coaxing to get anything from them, as if there was a fear of entrapment. These were grown men, too, not boys.

My best estimate of the size of the march was about 3,000 max. They were marched into an enclosed area in front of the local magistrates, fenced on three sides. The police left the west side of the plaza open for foot traffic, and easily a third of the crowd filed in there, including myself, not wanting to be inside the fences.

The rally struck off, and shortly after he began (not sure who was speaking) he asked for a minute of silence for Britain’s fallen. It took a bit to sink in to much of the crowd, but then it fell silent. After 40 seconds or so, off to my left someone shouted something that I couldn’t understand, but in a flash the EDL had turned to confront the shouter, and the day-glo yellow jerseys of the police were moving fast in that direction. There may have been a scuffle, I couldn’t see it, but from the chanting it was clear to me that the EDL was encouraging the police to take care of the problem, and it appeared they did.

Shortly afterwards the police barged past with a fat kid decked out in EDL garb who looked decidedly drunk, and an EDL steward pursued them. An hour later I saw the kid with the steward well away from the protest, so he wasn’t a provocateur, but I don’t know what he had to do with the outburst.

I decided to move a bit closer to the speakers, when I noticed smoke swirling from beneath some police. I at first thought some dumb bint had accidentally released tear gas, but then came the BANG. That set off a regular series of firecrackers, every ten seconds or so, nothing too loud, but it didn’t encourage me to see the police flinching with each bang. I have no idea how they could have gotten there, I never saw them flying, no anyone who could have been lighting them. But after a few minutes of that the police had enough, brought in another company (their reserves were impressive), and vacated the corridor.

However, where everyone went, I can’t say. They didn’t go inside the barriers with the EDL (I did, seeing no danger to doing so), and my sense was that most of them had been sympathetic to the EDL, I had seen many marching with them, but now they dispersed, and soon the number left inside the fence was less than 1,000. The police seemed determined to protect the EDL, but at the cost of driving away hundreds who came to see and hear for themselves what the EDL was about.

It’s worth mentioning that I talked to a lot of the police as a “tourist,” they were all helpful and good-tempered. No one tried to tell me anything bad about the EDL, and when they cleared us out of the passageway, they were professional about it, not confrontational. From what I saw they could have done just as good a job with half the numbers. The sad part is, as someone noted on one of the EDL forums, the perfect days get no mention at all in the news, as if they never happened.

There was a lot of rhetoric, but the desecration of the Churchill statue definitely enflamed them, and the idea of spoiled students who’d never worked a day in their lives doing it added fuel to the flames. There was a promise made that from now on whenever the students protested the EDL would be there. There was a lot on the evils of Islam.

After an hour I needed to leave. I had to go a long way around, and along the way encountered the Muslim counter-protest, such as it was — maybe two to three dozen, total.

I could see a lot of these EDL youth serving under arms in a place like Rorke’s Drift, and winning. They talk about Islam a lot, but in part it’s a whole understanding of what it means to be English that they’re angry about, angry because it was taken away from them and they had nothing to say about it.

7 thoughts on “A Report From Peterborough”