Our South American correspondent BG has uncovered a recent document from the French Education Ministry inviting culturally enriched parents to have their children schooled in Arabic language and culture — in the public schools.

The French Ministry of Education is sending a form to Muslim parents in both the French language and the Arabic language. This is the Arabic text of the message: 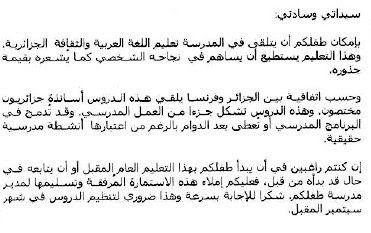 Below is the text of the French language message found on the form (translated into English):

At school your child may receive teaching in the Arabic language and Algerian culture. Whilst valuing family origins, this teaching can turn into an asset for his/her personal accomplishment.

Through an agreement between Algeria and France, these courses will be held by qualified Algerian teachers. They are to be part of the class. They can be integrated to the school timetable or delivered after class while still being considered true school activities.

Should you wish for your child to start such a course next year, or to continue it if he/she has already started one, fill in the accompanying form and hand it over to the director of your child’s school. Thank you for a quick reply, as it is necessary in order to order to plan courses for next year’s new term.

The actual form to be signed by the Muslim parents is reproduced in segments in this post. 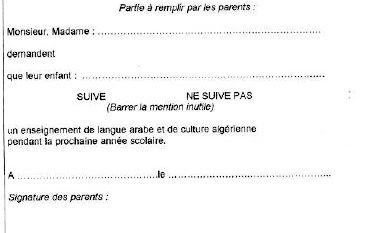 4 thoughts on “The Islamization of French Primary Schools”