Earlier today, in a post at Jihad Watch about the current assault on free speech, Robert Spencer had this to say about Elisabeth Sabaditsch-Wolff’s case (and kindly included a link to Elisabeth’s Save Free Speech website):

Meanwhile, in Austria the kangaroo trial of freedom fighter Elisabeth Sabaditsch-Wolff for telling the truth about Islam has begun. Latest updates here. I offered to testify on Elisabeth’s behalf in that case, and the offer still stands; I’ll be keeping you updated on that case as well.

This was not in fact a full account of what happened.

I left a comment on the post (it was comment #7 at the time) to clarify the train of events. Shortly after I posted my comment at Jihad Watch, a reader pointed out that it had been inexplicably deleted.

Below is a screen cap of the full text of my comment as it appeared at the time of posting: 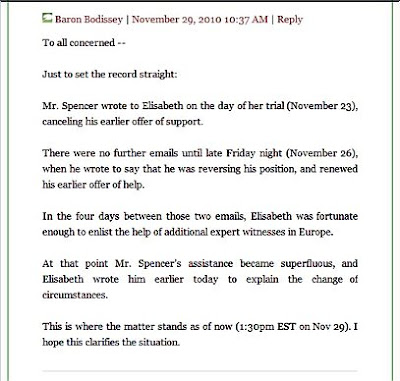 I’ll reproduce the entire text below the jump.

Elisabeth obviously did respond to Mr. Spencer’s offer, although as of post time he has not yet acknowledged that fact publicly.

In the four-day gap between Mr. Spencer’s withdrawal of his original offer and his apparent change of mind, Elisabeth became quite concerned about whether or not she had enough experts on Islam to call as potential witnesses during the next phase of her trial. She quickly contacted other knowledgeable people, and was fortunate to find additional experts — people who were closer by, in Europe — to assist her at the trial. For that reason, she declined any further help from Robert Spencer.

So that’s what happened. Elisabeth is not ungrateful for Mr. Spencer’s offers of help. Under stress in the face of what lay ahead, she simply needed a firm commitment, and was able to secure that promptly from others.

In case the above image is hard to read, here’s the full text of my comment before it was deleted from Jihad Watch:

Just to set the record straight:

Mr. Spencer wrote to Elisabeth on the day of her trial (November 23), canceling his earlier offer of support.

There were no further emails until late Friday night (November 26), when he wrote to say that he was reversing his position, and renewed his earlier offer of help.

In the four days between those two emails, Elisabeth was fortunate enough to enlist the help of additional expert witnesses in Europe.

At that point Mr. Spencer’s help became superfluous, and Elisabeth wrote him earlier today to explain the change of circumstances.

This is where the matter stands as of now (1:30pm EST on Nov 29). I hope this clarifies the situation.

Elisabeth is indeed fortunate to have so many thoughtful and knowledgeable people available to help her with her case.