As we reported a few days ago, the Turkish ambassador to Austria caused an uproar in his host country when he spoke disparagingly of Austrians and criticized its internal political policies concerning Turkish immigrants.

Our Austrian correspondent Elisabeth Sabaditsch-Wolff has compiled a report on the fallout from the ambassador’s interview, drawn from both German- and English-language sources.

A diplomat is a person who can tell you to go to hell in such a way that you actually look forward to the trip.
— Anonymous 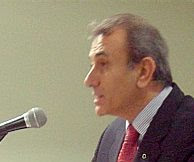 Seldom has an interview given by an ambassador generated as much outrage as the one published in Die Presse several days ago. The Turkish ambassador to Austria, Kadri Ecvet Tezcan, openly and harshly criticized Austrian ministers and Austrian integration policies, as well Austrians themselves (“Austrians are not interested in other cultures.”) Thankfully, the usually lame Austrian politicians have reacted unusually sharply, while being careful to avoid a diplomatic row. A severing of diplomatic ties cannot be in the interests of either Austria or Turkey.

Chancellor Werner Faymann called Tezcan’s statements “unprofessional and unacceptable”. Finance Minister Josef Pröll said that it is totally unacceptable for a diplomat to comment on the host country’s domestic policies; Interior Minister Maria Fekter, who was also verbally attacked, spoke of an “unbelievable lapse which is unworthy of a diplomat.” BZÖ (Alliance for the Future of Austria) demanded an end to EU accession talks with Turkey, while FPÖ called for the suspension of diplomatic relations with Turkey.

That Ambassador Tezcan was immediately summoned to the Austrian foreign ministry for talks with the relatively low-ranked head of department in charge of Turkey — rather than the secretary general of the foreign ministry or at least the political director — was a clear sign of distaste on the part of official Austria. Given Turkey’s expertise in diplomatic customs, one can safely assume that the message was received. The head of department, a ranking minister plenipotentiary, informed him that his attacks against politicians and certain political parties cannot be tolerated. Also, the tone of the interview does not conform with diplomatic practices and the standards expected from Turkish foreign policy. Tezcan listened to the charges, got up and left.

The English-language Austrian Times sums up the ambassador’s remarks as follows:

Speaking to Austrian newspaper Die Presse, Kadri Ecvet Tezcan claimed Turks in Vienna knew they were not welcome in Austria. He also revealed having been told that the Austrian foreign minister does not welcome ambassadors for meetings — and revealed he would relocate the United Nations (UN) from Vienna were he leader of the international organisation.

Asked why immigrants from Croatia seem to do better at school than most people from Turkey, Tezcan said: “Croats are Christians and therefore welcome in the society, while Turks aren’t. They are constantly being pushed to the corners of the society.”

The ambassador however also stressed he registered many “stories of success”. He said: “There are more than 3,500 Turkish businessmen and 110 Turkish doctors in Austria. […] Why doesn’t the Austrian concentrate more on that?”

Tezcan emphasised he has been advising Turks living in Austria to learn German and respect the country’s rules. He explained: “The Turks (in Austria) don’t want anything from you. They aren’t happy. They don’t want to be treated like a virus. (Austrian) Society should help them integrate — and then it would benefit from them.

Referring to the Freedom Party’s (FPÖ) success in last month’s Vienna city parliament ballot, Tezcan said: “Almost 30 per cent support a far-right party in a city which regards itself as the cultural centre of Europe. I would not stay here as head of the UN, the OSCE (Organization for Security and Co-operation in Europe) or the OPEC (Organization of the Petroleum Exporting Countries).”

The Turkish ambassador said: “If you don’t want any foreigners, why don’t you chase them away? There are many countries in the world where immigrants are welcome. You have to learn how to live together with others. What kind of problem does Austria have?”

Tezcan claimed: “The Turks in Vienna are helping each other. They don’t feel welcome here. […] I have been here for a year now. […] There’s a big difference between Vienna and the rest of Austria. People are more hospitable when I leave Vienna.”

The 61-year-old attacked Austrian People’s Party (ÖVP) Foreign Minister Michael Spindelegger by revealing the minister rejected to meet him. He said: “I was told that the foreign minister doesn’t welcome ambassadors when I asked for a meeting. Can you believe that? I’m the ambassador for 250,000 people in this country. What kind of dialogue are we talking about here?”

Tezcan, who was the Turkish ambassador to Poland between 2005 and 2008, also criticised Viennese Archbishop Christoph Cardinal Schönborn by saying: “I met the cardinal, who is a wonderful person. He said to me he hasn’t got any problems with Turks. I told him: ‘That’s not enough, you have to do more, you have to write that in your newspaper column. You should say that the Islam is worth as much as Catholicism.”

Schönborn has been attacked by some NGOs and politicians for writing a weekly column for the Kronen Zeitung. The bestselling daily has campaigned against foreigners and linked soaring crime with “organised gangs from Eastern Europe” for years.

Asked how to reduce the number of Turkish children in special needs schools due to poor language skills, Tezcan suggested there should be more support for them learning Turkish properly. The ambassador claimed such a measure would help them in learning German.

The diplomat also said attending kindergarten should be mandatory for Turkish children aged three or four to improve the integration process. “Parents, teenagers, children — they all should be able to speak German,” he told Die Presse.

Tezcan revealed he met FPÖ boss Heinz-Christian Strache to discuss problems of the coexistence of Austrians and Turks. “We agreed to disagree about everything regarding integration,” he said about the conversation with the right-winger. The Turkish ambassador accused Strache of “having no idea how the world develops.”

He also criticised the Austrian Social Democrats for failing to stand up against the FPÖ’s agitation.

Tezcan rejected calls to ban headscarves. Politicians of all Austrian parties suggested Muslim women should not be allowed to wear them amid concerns they were enforced by their husbands to do so.

“Does wearing headscarves break the law? No. You haven’t got the right to tell anybody what to do regarding this issue. If you are allowed to bath [sic!] [swim] naked, you should be allowed to wear headscarves,” he said.

It is true that many of the grievances mentioned in the interview have some truth to them. However, one commentator pointed out an important and dangerous aspect:

One of Ambassador Tezcan’s statements is not only wrong, but simply dangerous: If he believes that he can speak about Austrian citizens with Turkish background as “his” fellow countrymen, he ignores Austria’s sovereignty. Or perhaps Turkey understands itself to be the protecting power for all emigrant Turks […]. The next step may be to make a territorial claims with regard to the residential areas of “its” people, such as the districts of Favoriten and Fünfhaus in Vienna.

Turkey sees itself as a Eurasian great power and does not want to be treated by official Austria as the migrant workers’ home.

While the Turkish daily Hürriyet unsurprisingly congratulated Ambassador Tezcan for his remarks, Austrian newspapers showed their annoyance and anger about him. The recent headlines were loud and clear:

What actually made the Turkish ambassador utter these controversial, sometimes even truthful statements? Granted, at the beginning of the interview, Tezcan asked the interviewer whether he should speak as the ambassador or as a private person. Naturally, the bait was eagerly taken by the journalist. What the question boils down to is: Is anything an official representative for a country says ever personal, ever private? What commentators have so far failed to address is that no ambassador, or any accredited diplomat, is ever a private person. Bluntly put, even commenting on a local dish served at a pub is seen as a diplomatic statement. Mr. Tezcan should have known this; he must have known this. It is rather lame that he defends himself by saying he merely wanted to start a discussion.

This leads us to the next question: Cui bono? Who benefits from this interview? Could it be that Turkey is highly frustrated about the lack of progress in the accession talks, which have been stalled for a while, as one commentary asks today?

It is naive to even think that the comments criticizing Austria made by the ambassador of the Turkish Republic are his personal opinion. […] The Turkish foreign ministry has thought very carefully about who to send to Vienna. The ambassador’s statements are to be seen in the context of the EU-wide debate with regards to the accession of Turkey, and are directed at a government opposing Turkey’s EU-accession. […] It’s easier to attack the weakest of the three countries [France, Germany, Austria, which all oppose accession]: It was Austria that wanted to block accession talks in 2005.

While this frustration may be understandable, it is also mostly uncalled for. After all, it is Turkey that is blocking one of the most contentious parts of the negotiations: the question of Cyprus and Turkey’s unacceptable military occupation of roughly forty percent of an EU-member state. In addition, the population also appears to be losing patience with the near standstill of the negotiations; the latest polls show a forty percent approval rate, down from seventy percent.

However, given that Turkish diplomats are by many accounts some of the best-trained in the world, it is surprising — to say the least — that an ambassador with Tezcan’s track record would say anything without the foreign minister’s backing, or that of any other important institution, such as the Ministry for Religious Affairs, unless he wants to play political hara-kiri with his career.

So what will happen to this man who has become a star in the eyes of the local Turkish and Turkish-Austrian population in the past few days? Austrian diplomats believe that he might be recalled to Ankara after a cooling-down period, where he will either be transferred to a higher position — this would mean the interview was planned well in advance with an agenda behind it — or he will return to Ankara to a lower-ranked position, which means that he there was no hidden agenda, and the man has risked his career. However, this latter scenario is believed to be unlikely.

If, on the other hand, Mr. Tezcan remains at his post in Vienna, whatever may happen, his reputation has definitely been tarnished. He will be seen as a lame duck by many partners he may need, both in the host country and among the diplomatic corps. His reports and comments made publicly in Austria are no longer considered viable. A more than unpleasant situation for Ambassador Tezcan — unless this brouhaha was a long-hatched plan.

Only time will tell.