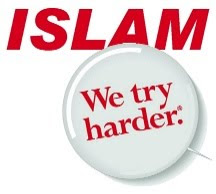 Readers of a certain age will remember an advertising campaign by the Avis car rental company which featured the slogan “We Try Harder”. The conceit was that because they were only number two in the rent-a-car business, Avis had to do a little bit extra in customer service to attract more business.

The latest news is that Islam has shot past Protestantism to become the second-large religion in Austria. With only the Catholic Church standing between the imams and full ascendancy, you can bet that Islam is trying harder.

The following article (not available online) is from the November 12th edition of Die Kronenzeitung, on page 10 in the domestic news section. Many thanks to JLH for the translation.

As if the discussion surrounding the Turkish ambassador were not enough! Now a new study is causing uproar: It says that next year Islam will be the second largest religious group in the land. Protestant and Orthodox Christians are already left behind.

Precise scientific analyses now underpin what has been perceived for along time in the public at large: Islam is on the move! Already in 2011 more people in Austria will profess the teachings of the Prophet Mohammed than the theses of Martin Luther, the founder of the Protestant Church.

To be sure, Catholics remain the largest religious community at 66%, as shown in the study of Sociologist Josef Höchtl. But more than 500,000 people will already belong to Islam.

“A striking change in structure among the religions can be foreseen,” stresses Höchtl.

This development is not new. In 1971, just 23,000 persons were adherents of Islam, exactly 0.3 percent of the population in Austria. 40 years later, there are 22 times as many. If this trend continues, it is only a question of time until the adherents of Mohammed catch up with the Catholics and beyond that to form the largest religious group in our land…

2 thoughts on “Islam: We Try Harder”