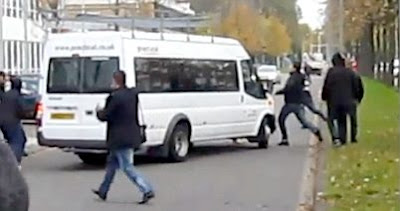 Our Dutch correspondent Batavian was one of the Dutch Defence League’s organizers of the free speech rally in Amsterdam on Saturday. He sends this report in the aftermath of last weekend’s momentous events:

The demonstration is not over.

A Dutch television station followed the EDL van and recorded what happened. The tape reveals that all the violence came from the leftists. The TV people asked how it could be possible that the police allowed the leftists to attack the van, and did not escort it.

They will call the EDL later on for an interview, and want an item for tonight’s TV program to show viewers which side the violence came from. [Note: the program is airing as this is being posted. — BB]

The TV guy knows people were held up at other stations, or not allowed to enter the area at all. Why would the police allow a train with Ajax hooligans arrive at the subway station when they knew in advance that they would team up at a previous station, Sloterdijk station?

Why were they allowed to leave that train?

The attack on the bus will also be discussed and the fact that a “far-right extremist” was asked to leave.

Tommy told me today that when they were getting into difficulty, the Dutch police turned away — yes, that is true!

The police knew in advance of Tommy Robinson’s arrival, since the EDL liaison guys gave me info up front about how they would travel to Holland. They knew they would be coming to Amsterdam through the Hague, and they could easily have escorted them.

But there is another odd thing: The AFCA/Ajax hooligans had made a callout two days before the demo to team up at Sloterdijk station, which is one station away from Isolatorweg, the place where we held the demo. The Ajax hooligans got involved after van der Laan made up a story about hundreds of hooligans from other Dutch cities invading Amsterdam. He said he had this info, but neither the police nor I were aware of it.

Now why do the police allow a subway train full of hooligans to exit a station and move forward to our demonstration area? They could have held them at Sloterdijk station.

That means : “Team up at 13:00 at Sloterdijk station to move forward…”

This announcement was published in the media as well, so the police were well aware of it.

It really looks like they needed violence that day. To have an excuse for the enormous police presence that was around. We’d been telling them all the time about what kind of people would come, and how many, but they preferred to believe the media.

Also: when we agreed to moved to our new location the police told us the train station would be safe. But we hear people were intimidated at strategic stations like Amsterdam Central and Amsterdam Sloterdijk. People were sent back home. And they even the stopped public transport towards our demonstration area.

This is how the Mayor and the police protect peaceful citizens of the Netherlands and the rest of Europe who gather to protest the suppression of free speech.

This is how they do their “duty”.

9 thoughts on “Dereliction of Duty”