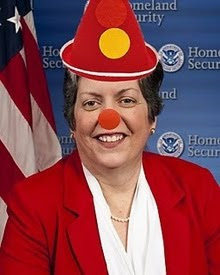 I don’t know how long this guy’s site will be up before the Prissy Pants clowns make him take it down. I no longer believe that Free Speech exists in America. Sure, you can say what you want on your day off, but that’ll cost you your job, bub. And then… then, The Lawyers Will Come, trailing billable hours in triplicate. Watch your health, wealth, and value to the community swirl down the hole as Justice grills you to a turn and serves you up with an apple in your mouth pour encourager les autres.

Land of Free Speech? Not anymore.

Ask Derek Fenton, who is suing to get his position back with the New Jersey Transit. That’s the guy who burned a few pages of the Koran at Ground Zero on 9/11 on his day off. I’ll admit that his form of dissent isn’t mine, but surely he has a right to his act? After all, burning the American flag and telling kids to kill their parents earned Bill Ayers a university position.

What was further dismaying About Mr. Fenton’s case was the Governor’s position. Christie said the Transit folks were right to fire the guy. That summary judgment caused me to put a big black line through his name as a possible Republican candidate for national office. He’s been wonderful for New Jersey’s finances, but who needs his kind of interpretation of the tenets of free speech in higher office? No thanks.

Okay, back to our entrepreneur. He’s got a website: “The One Stop Shop for Your Official TSA Groping Guide Shirt”. For those devil-may-care, spit-in-your-eye adventurers, this shirt is designed to be worn to the airport and used as a guide for your Groper. It’s a graphic shirt, but it certainly explains the process in sufficient detail.

I dare you to buy one. And wear it at the airport. A certain lack of sobriety would help. I’d put up an image, but… just to be safe, why not take a look for yourself.

Hey, wait a minute. Given those detailed directions, what about…

You get my drift. The slings and arrows of time and fate which deform some of us also [used to] earn us the respect of discretionary exceptions. Otherwise, what are all those Handicapped laws about?

Also of note, another fellow has documented the travail he endured whilst interfacing with various members of the TSA at the San Diego Airport. His story is worth reading just to understand how thoroughly bureaucratized and befuddled these folks are. What did Captain Cleary tell his fellow pilots about the new TSA procedures? Oh, yes: that they were “embarrassingly devoid of common sense”. Seems like the more you learn of these procedures the larger looms the void. It is Kafka come to life.

This hapless traveler, whose plane left without him, was first ordered to be escorted from airport property by the police. Then once he was on his way, he was told he wasn’t permitted to leave the airport and had to return to be Groped some more. The man left his camera on at different times, just to catch the audio portion of parts of his experience. But he’s also written it up in some detail.

His story has captured the attention of 1,680 commenters so far. Or rather, that’s how many comments there are in the thread. No doubt some folks have left more than one. “Anonymous” left a whole slew of them, but this entry pretty well sums up the sentiment:

Good for you. Can’t wait to see the video. If everyone followed your example, the TSA would be forced to stop this illegal, immoral, unconstitutional behavior. We need to start a database of TSA agent names for use in the latter-day Nuremberg trials.

Well, that’ll never happen. The trial, I mean. But I do predict what may likely transpire as Big Sis digs in her heels: some anonymous sites, hosted in other countries, will begin posting photos of TSA Gropers at specific airports. For example, this fellow has one photo of a TSA supervisor (I think) though it’s upside down at the moment. Remember, he was using the camera for voices – at least that’s what he tried to do when they weren’t all conferring about him out of earshot.

I further predict this act [photographing the ’crats] will be made illegal (if it’s not already) which will simply encourage further fury and more acts of exposure of TSA employees. Fortunately such acts of derring-do are beyond my capabilities so I’m not even tempted. Heck, I couldn’t build a sock puppet, not even if you gave me the yarn, knitting needles and the googly eyeballs.

Will these new, even more insane, sadistic and aggressive TSA interrogations become the downfall of Big Sis? As she becomes the butt of many late-night comedy show jokes, will she become even more rigid and intransigent?

This is a collision course between BS and reality. It will not end well. People who grab more than their share of hubris often find it can’t be digested as easily as they’d first believed. ’Tis a shame they’re characterologically incapable of walking back their mistakes.

Hold onto your hats, y’all. Or buy a T shirt.

6 thoughts on “America: Land of the Entrepreneurial Spirit!”