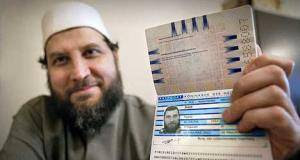 Another court case has been brought against Geert Wilders, this one by a fundamentalist “Dutch” imam who accuses Mr. Wilders of smearing his good name.

First a De Telegraaf article, as summarized by H. Numan:

Geert Wilders must appear in another court case, this time in the Hague for a charge filed by imam Fawaz Jneid.

Fawaz is generally seen as one of the most conservative [read: “Taliban fundy”] imams presently in the country.

He is imam in the Salafist As-Soenah mosque. In his movie Fitna Wilders showed a fragment of an interview of Fawaz, broadcasted in “Netwerk”. Earlier the imam made it known he was going to sue for copyright (portrait right) infringements. Wilders used this fragment unlawfully, and smeared his good name.

H. Numan’s commentary on the esteemed imam appears at the bottom of this post.

Next comes an article from De Volkskrant, as translated by VH:

PVV leader Geert Wilders must next week also appear in court in the Hague. Imam Fawaz Jneid is demanding 55,000 euros of Wilders, as the politician used a fragment of an interview with Fawaz from the TV program “Network” in his anti-Koran film Fitna.

The session will be held next Wednesday in the Hague court. That week Wilders will also spend four days in court in Amsterdam, where he is being tried for insulting a group [for which the prosecutors have proposed acquittal] and inciting to hatred and discrimination.

The conflict with the strict Orthodox [Salafi — translator] clergyman Fawaz Jneid from the As-Sunnah mosque in the Hague dates from the spring of 2008. Wilders had used a fragment of a Network TV interview of October 2007 in Fitna. The imam then said that his portrait right was infringed and that Wilders had acted unlawfully, and thereby affected his good name and honor.[1]

When in July 2008 the imam filed his claim against Wilders, the latter indicated he was not impressed: “This hate-imam has cursed Ayaan Hirsi Ali, Theo van Gogh and Afshin Ellian and said the most terrible things. He screams louder than a pig.” Wilders also said: “I’m not going to pay a penny.”

H. Numan concludes with this commentary:

Imam Fawaz is by far the most controversial imam in the country, and probably in the top ten of Europe. He doesn’t have to worry about his good name, though. One needs to have a good name in order to have it smeared, after all. He claims €55,000 in damages. Probably with an additional 72 virgins.

Imam Fawaz was asked to leave Morocco by his government. Either go to jail for inciting hatred, or become a missionary far away. The Moroccan government was very happy to get rid of him. He has resided for over twenty years in The Netherlands. He doesn’t speak a word of Dutch, nor does he want to learn a heathen language (his own words). He holds dual Moroccan-Dutch nationality. In his own words: the fact that he holds a Dutch passport prevents him becoming a persona non grata.

“Oh Allah, present [Theo] van Gogh a disease that cannot be cured by any inhabitant of earth. He will long for his death, but not get it.”

Sadly, this scumbag was not prosecuted for inciting hatred. After all, apartheid is a Dutch word.

4 thoughts on “Wilders Is Charged Yet Again”