Last night I posted about a thinly-veiled threat issued by a Turk against Germans who support nationalist leaders. Tonight a much more explicit threat comes from the Pakistani Taliban against the Netherlands.

Our Flemish correspondent VH has translated an article with the latest from De Telegraaf:

The Pakistani Taliban leader Wali ur Rehman threaten attacks aimed against the Netherlands in response to “laws” the Netherlands may make “against Islam” and “ridiculing Islam.” He said as much in an interview on the Dutch RTL News. The National Coordinator for Counterterrorism (NCTb) knows about the statements, but sees no reason in it to review the current threat situation, which is “limited”. 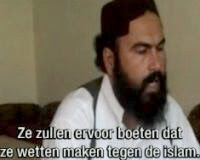 “We do take these signals seriously,” said his spokeswoman in response. “But these expressions were known to us and we have already factored those into our threat assessment.”

“The path the Dutch government has taken for the last few years is very dangerous,” Wali ur Rehman said. “They always try to make new laws against Muslims. They ridicule Islam and try to confine it. We believe this is the first phase of the plans of the Dutch government. Therefore we will try — and this has a priority for us — to teach them a lesson. They will pay a price for making laws against Islam.”

International terrorist groups still view the Netherlands as an Islam-hostile country, and therefore a ‘legitimate’ target, as was reported in the latest threat assessment from the NCTb on September 13. According to the analysis in recent months there has been no concrete evidence of attacks against the Netherlands. Therefore, the threat level for the Netherlands will remain at ‘limited’. In the U.S. moreover, there also is a reward on Rehman’s head of $ 5,000,000.

The NCTb thinks that the risk of terrorist attacks against Dutch citizens is greater in or near areas where jihadist groups are active. These are countries such as Pakistan, Afghanistan, Indonesia, North Africa, Somalia and Yemen.

The Netherlands still has a high international profile and is seen by extremists as a legitimate target, because the Dutch government wants to oppress Muslims. Another reason for the use of violence is that in the Netherlands statements are made that can bee understood as ‘hostile to Muslims’. In particular, PVV leader Geert Wilders has drawn international attention with statements and plans, however without this leading to concrete threats, concluded the NCTb.

12 thoughts on ““We Will Teach the Dutch a Lesson””