I reported last week on the intense propaganda and agitation against the Sweden Democrats by the media and political establishment. It’s quite obvious that SD — who are strongly critical of mass immigration and the Islamization of Sweden — have frightened the Powers That Be in Sweden.

So last week the Powers That Be struck back by trying to put the fear of God into the electorate (and into the Sweden democrats). Bishop Eva Brunne gave a sermon at the opening of Parliament that was clearly directed at the newly-elected Sweden Democrats, although the bishop herself later denied it.

As one of the reports below tells us: “MPs gave Brunne ‘stormy applause,’ it is said. Just as it says in the notes of the CPSU, when Stalin spoke. Who is impressed by that?”

Our Swedish correspondent LN has compiled a report on Bishopgate, as translated from various media sources. First, from Berlingske Tidende:

Part of the immigration-critical party Sweden Democrats walked out of the worship service in Parliament, as the openly lesbian Stockholm bishop Eva Brunne preached against xenophobia…

Shortly before the new Swedish Government was presented to the public, there was drama in Swedish politics. On Monday Sweden Democrats walked out of a church service that was part of the prelude to the opening of Parliament.

Bishop Eva Brunne spoke in her sermon about racism and xenophobia. It was too much for party leader Jimmie Åkesson and some of the other [but not all] Sweden Democrats.

“It was a clear attack on us,” he says[, pointing as she did to the large ‘thousand-headed’ demonstration yesterday evening on Sergel Square with the commie leader Lars Ohly partaking. The mob demonstration that was mentioned in the bishop’s speech was specifically against the Sweden Democrats and their leader Jimmie Åkesson].

“The mob shouted that I should be expelled and even killed,” says Åkesson, according to news agency TT.

The bishop’s speech also quite clearly referenced the fact that Sweden now has an immigration-critical party in Parliament. 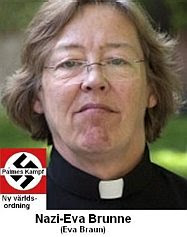 “The racism that says that you are not worth as much as me, you do not have the same rights as me, do not deserve a life of freedom due to our being born in different parts of our world — it is not worthy of a democracy like ours to make such differences between people,” said the bishop.

Jimmie Åkesson says the Sweden Democrats will still participate in the remaining events of the opening of Parliament.

“What we did in church was very spontaneous. I was very surprised at the bishop’s speech and I have even been actively involved in church politics for a very long time,” he says.

From the newspaper of the Swedish state church:

Bishop Eva Brunne commented on the Sweden Democrats’ exodus during her sermon on the equal value of all humans. “It is always sad when people leave the church,” she says.

Brunne said that her sermon, in which she took up racism and the demonstration in Sergel Square, was not a move against the Sweden Democrats. She did not mention the party by name.

“My role as bishop is to interpret the gospel in our time,” she says.

Was the Sweden Democrats’ reaction expected?

Also from the church’s paper:

The bishop talked about the church’s belief in human dignity and equal value regardless of what country we were born into, no matter what gender and what age we are, however our sexual orientation is expressed. It was when she weighed in on yesterday’s demonstrations against racism that the patience ran out for the Sweden Democrats’ party leader Jimmie Åkesson, party secretary Björn Söder, and several of their colleagues. They left the worship ostentatiously.

“It’s not worthy of a democracy like ours to make differences between people,” continued the bishop, while the Sweden Democrats left the church.

The Sweden Democrats then gathered at the party office.

“A strange way to handle the situation. If you are unable to listen to what you do not like, how are you going to cope?”

This is dissembling on the part of the honorable Bishop. Her sermon was clearly political, and to feign surprise at its political effects is disingenuous at best and blatant dishonesty at worst.

Another report, this one from Expressen, concerning Lars Ohly of the Left Party (formerly the Communists):

“I can promise you one thing: I will never hang out with racists,” said Lars Ohly in his speech.

And he was referring to the election night when he refused to sit down in the same make-up barn on SVT next to the Sweden Democrats’ party leader.

“I will not sit in a dressing room with Åkesson!”

Lars Ohly think it is important to demonstrate his commitment and support this type of manifestation.

“Must take the fight”

“Sometimes you have to go out and show what you think, not just sit at home and think,” he says to Expressen, and continues:

“We must take this fight, especially now that they have been elected. No one is to leave Sweden but the Sweden Democrats.”

Police said it was quiet and peaceful at Sergel Square.

“This group has demonstrated in previous years, and it won’t be easy. It’s not a violent group,” said Kjell Lindgren, spokesman for the Stockholm police.

Eva Brunne — in the Echo called Brunner — claimed that in every sermon she deals with human value/human dignity. I think this is either rhetorical exaggeration of the moment, or the rulings of a religion other than Christianity; the biblical words about all human beings’ value are few, so few that they do not supply us with materials to use in any sermon or worship service. MPs gave Brunne “stormy applause,” it is said. Just as it says in the notes of the CPSU, when Stalin spoke. Who is impressed by that? The church as a demonstration site to say what should be said — is it just me who is ill at ease?

Brunne indicates that it’s her role as bishop “to interpret evangelism in our time,” she says. It is all well and good. I read her sermon. I must say that I hear many admonitions and exhortations, openly expressed and silently, as she says. One person who read theology together with Martin Luther would call this law. Even when there is talk of grace, the call sounds “Know the grace to rest in the God who created us.” The most difficult art of preaching is to distinguish between law and gospel — but such was not in the sermon at the opening of Parliament.

When we do something — yelling out our abhorrence of racism, for example — it is said: “We do it with God’s help.” Gospel? Hell no!

And how can you get the idea to link to a demonstration which clearly was organized against one of the parties in Parliament, when the task is to preach to all MPs? Must not it be handled with a bit more finesse, pure and simple? Apart from the serious incident with the knife threat. For the effect would have been that the overwhelming proportion of MPs felt so righteous, so righteous (storming applause). I can fully understand why the Sweden Democrats marched out. They got the clear message that they did not fit in the Great Church. They were told from the highest place, second only to God the Father. For it is, I suppose, in this way we see a bishop?

For another account (in English) of all these churchly goings-on, see Cavatus.

22 thoughts on “Heaven Frowns on the Sweden Democrats”