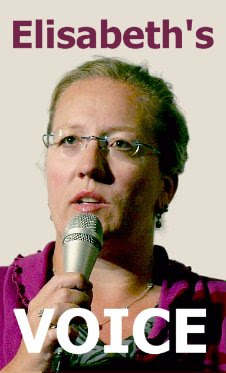 We, the undersigned — consisting of four European blogs, one Canadian blog, and one American blog — have written this post jointly as a public call for our American colleagues to take up the cause of the Austrian feminist and anti-jihad activist Elisabeth Sabaditsch-Wolff.

Geert Wilders is well-known to most American conservative and libertarian bloggers, but Elisabeth’s case is not so prominent. Like Mr. Wilders, she faces trial for reporting factual information about Islam. Her “crime” was to conduct public seminars in which she described Islamic doctrine, quoted from the Koran, and explained to her listeners what she considers the dangers of Islam.

Like Mr. Wilders, Elisabeth has been charged with “hate speech” for her words. Unlike Mr. Wilders, however, Elisabeth is a private citizen, a wife, and the mother of a small child. She lacks the major resources necessary to defend herself against the well-funded organs of the state which seek to persecute her.

Elisabeth will go on trial in Vienna on November 23rd, in what is clearly a political action intended to silence anyone who dissents against the prevailing multicultural orthodoxy.

Americans may think that Elisabeth’s is a uniquely European plight, and has nothing to do with them. But make no mistake about it: the same repression is on its way to the United States of America. As the recent cases of Molly Norris, Juan Williams, and Derek Fenton demonstrate, free speech may already be taken away by non-juridical means. Dissent is even now being silenced in schools and on college campuses, and politically incorrect expression is cause for dismissal from both public and private employment.

The same types of “hate speech” laws that were used against Elisabeth in Austria are being prepared for the United States through the work of the United Nations. At the initiative of the Organization of the Islamic Conference, the UN is on the verge of requiring all member states to pass laws criminalizing “the defamation of religions, including Islam.”

Your president, Barack Hussein Obama, has indicated his support for the UN’s proposed resolution. Time is running out for all of us. If we don’t stand up now for people like Geert Wilders, Ezra Levant, Mark Steyn, and Elisabeth Sabaditsch-Wolff, there will be no one to stand up for us later, when our turn comes.

Links to detailed information about Elisabeth’s case may be found at the bottom of this post, along with a link to her legal defense website where you may donate to her cause.

Elisabeth’s Voice calls on the American blogosphere to support Elisabeth Sabaditsch-Wolff in her fight for the right to speak freely.

Of the hundreds of American blogs who have not yet spoken out on behalf of Elisabeth, we appeal to a dozen of the most prominent and influential American voices:

First and foremost is Jihad Watch, which is the single most authoritative source on the web for accurate and scholarly information about the dangers posed by Islam. Its founder, Robert Spencer, has helped Elisabeth in the past through his Freedom Defense Initiative last February. We appeal to Mr. Spencer to step forward and renew his support for Elisabeth.

Atlas Shrugs has been in the forefront of publicizing and raising citizens’ awareness of the ongoing Islamization of America. Pamela Geller’s work in opposing the Ground Zero mosque is unsurpassed. With Robert Spencer, she was also a partner in the Freedom Defense Initiative last winter. We appeal to Ms. Geller to renew her efforts on behalf of Elisabeth.

National Review’s The Corner is one of the most popular political blogs in the American blogosphere. Its contributors include Jonah Goldberg, John Derbyshire, Andrew McCarthy, Jay Nordlinger, and other prominent conservative writers. We appeal to The Corner to come to the aid of Elisabeth and her right to speak freely.

Gateway Pundit is the best single non-MSM source of news and commentary in the United States. Jim Hoft is tireless and committed in his service to conservative principles and traditional values. We appeal to Mr. Hoft to add his voice to ours in support of Elisabeth.

Hot Air specializes in video reporting and political commentary, and follows the most controversial American issues with close attention. We appeal to Hot Air to extend its coverage to include the videos, images, and articles about Elisabeth’s case.

Hugh Hewitt is better known as a radio host than a blogger, but his blog was prominent during the 2004 election season. His book Blog inspired the formation of many small political American blogs. We appeal to Mr. Hewitt to inspire us again by taking up Elisabeth’s cause in the name of liberty.

Daily Pundit is one of the longest-established American blogs. Its founder, Bill Quick, has the distinction of being the man who coined the term “blogosphere”. We appeal to Mr. Quick to help bring Elisabeth’s case to prominence in the blogosphere which he so aptly named.

Instapundit is the the oldest and most famous politically-incorrect blog in America. Glenn Reynolds has enriched the new media with his wide-ranging coverage of social, technological, and political issues. We appeal to Mr. Reynolds to enrich us with his support for Elisabeth’s freedom.

Michelle Malkin concentrates on political and social issues, with a particular focus on the damage done to the United States by President Barack Hussein Obama and the Democratic Party. We appeal to Ms. Malkin to publicize the damage being done to all our freedoms by the case against Elisabeth.

Power Line, like Instapundit and Michelle Malkin, was one of the major blogs that helped expose the forged “Killian memo” during the 2004 election campaign. Two of its contributors are lawyers, and the blog often focuses on legal issues. We appeal to Power Line to focus its valuable energies on the legal travesty that is the case against Elisabeth.

TigerHawk is a New Jersey blogger who covers political issues and national security. He stands in occasionally for Wretchard at the Belmont Club, and is an expert on the intricacies of behind-the-scenes machinations in American political affairs. We appeal to TigerHawk to expose the machinations of the corrupt political elites who are bringing Elisabeth to trial.

The European Union, which includes Austria, is a corrupt and undemocratic superstate with totalitarian aspirations. The oligarchy running it has determined that the millions of Muslim immigrants now living in Europe — and the millions more the EU plans to bring in — are necessary to secure the power base for the unaccountable bureaucrats who now oversee what passes for European governance.

Hence their need to silence people like Elisabeth Sabaditsch-Wolff who speak out against mass immigration and the dangers of Islamization. To help maintain the population in a state of sheep-like passivity, Elisabeth must be silenced.

But Elisabeth will not be silenced.

The Austrian court may take away Elisabeth’s voice, but while we yet have our own, we will speak for her.

We are Elisabeth’s Voice.

Those who wish to contribute to Elisabeth’s defense fund — which is not under her control, and may only be used to pay her lawyers — should visit the Save Free Speech legal defense website.

13 thoughts on “Elisabeth’s Voice: An Appeal”