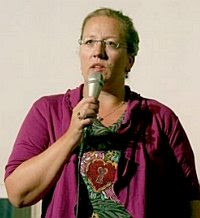 I reported yesterday that our Austrian correspondent Elisabeth Sabaditsch-Wolff has been given a court date (November 23) for her trial on “hate speech” charges. Regular readers are aware that Elisabeth has been charged for speaking the simple truth about Islam; for full details, see the list of previous articles at the bottom of this post.

Below is a press release (pdf, German) issued yesterday on behalf of Elisabeth by BPE Bürgerbewegung Pax Europa (Citizens’ Movement Pax Europa). Many thanks to JLH for the translation.

A reminder: readers may donate to Elisabeth’s defense fund at her legal defense website.

On September 15, 2010, Elisabeth Sabaditsch-Wolff learned through the media that she — like Netherlander Geert Wilders and Canadian Ezra Levant — had been charged with “hate speech” and “denigration of religious teachings”.

Elisabeth Sabaditsch-Wolff’s “offense” is to defend freedom of speech and much more against a tsunami of barbarism and against the politically correct silence and hushing-up. The subject of the complaint is the mere fact that she even gives Islam-critical seminars. For example, the indictment charges her with “hate speech” for the following statement: “Sharia is a definite no-no. We want no gender apartheid, no ghettoes, no social and cultural discrimination, no polygamy, no theocracy, no hate…”

At the international level, Elisabeth Sabaditsch-Wolff represents Citizens’ Movement Pax Europa as well as being a delegation leader at conferences of the OSCE (Organization for Security and Cooperation in Europe) in Vienna and Warsaw. She also offers Islam-specific seminars for various hosting organizations.

The simple fact that only a few hours are foreseen for the entire trial argues that this is a legal farce and a conviction is lying fully prepared in a drawer. Elisabeth will under no circumstances accept a guilty verdict. Rather, if necessary, she will take it to the European Court.

Elisabeth needs your help. Please help within your means. She is not only defending herself, but also standing up for freedom of speech for all of us in Europe. Further information on the website.