The following report about today’s events in Amsterdam was written by Paul Weston in collaboration with other members of the Counterjihad Collective.

Earlier today the EDL visited Amsterdam to make the case that freedom of speech and the ongoing loss of our democracy in Europe is not just a right-wing conspiracy, but a concrete reality.

And the reality was vividly shown to be not just concrete, but cast iron.

Whilst defenders of democracy gathered in the appropriately named “Isolatorweg” area of Amsterdam, the EDL boys were en-route in their hired bus.

The rally started at 2pm, but it started without the EDL. Where were they, we wondered?

Finally we were told — they had been set up, ambushed, and betrayed by the Amsterdam Town Hall.

The police had allowed their bus to be driven — very slowly — through the left-wing protestors.

Every window was smashed, as bricks, bottles and boots were launched against it. 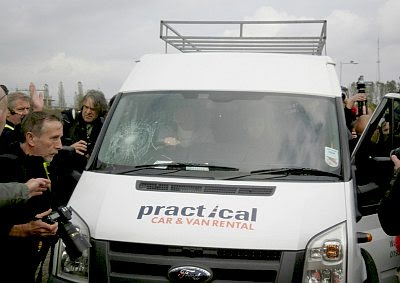 At which point the police stopped the bus and turned the EDL boys out to run a 300-metre gauntlet of vicious hatred and violence.

And they had to fight their way through, with no police protection, after which things became even worse. The Dutch police, acting on advice from the British police, stated they could not guarantee their protection, and ordered them to leave the area.

So, a freedom of speech rally was curtailed due to left-wing violence, and the EDL were not allowed to practice their democratic right of peaceful protest in the heart of liberal, tolerant Europe.

Betrayal. total and utter betrayal, carried out not by Islam, but by our own politicians.

A sad day, as Tommy Robinson noted. Democracy and Holland were shamed.

13 thoughts on “A Day of Shame for Holland”