The English Defence League has a reputation as a “racist” organization. It matters not a whit to the media oligarchs that Islam is not a race. It makes no difference that the EDL has numerous non-white members who cherish English culture. In the MSM and among the chattering classes, the meme is set, and cannot be changed.

The Danish journalist Sigurd Ericson visited England to find out first-hand the truth about the EDL’s “racism”. His report has been published at Europe News, and is reproduced here with permission.

Not a Trace of Racism: An Outsider’s Look at the EDL

(LONDON, October 25, 2010) The English Defence League is racist, fascist and violent — in brief, something the cat dragged in and which must be crushed by any means necessary if England is to remain free and democratic. This is what the British media have been telling the public ever since the EDL first made its appearance in the town of Luton 18 months ago, and armed with this knowledge I went to England to see for myself.

I was in for a big surprise for I could find no evidence that would support any of these accusations.

Quite the contrary: The leaders and rank and file that I met in London, Wolverhampton, Luton and Bolton (a fair cross-section of the national membership, one should think) are multi-ethnic. They are black and white, English, Irish (interestingly, both Catholic and Protestant), Hindu, Sikh, Christian, Jewish and probably a few other denominations and nationalities. Homosexuals are welcome and have even formed their own “division” in London — as have the Jews. 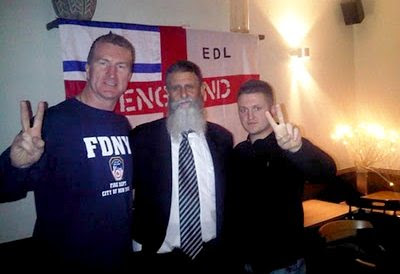 
These special divisions may not have a lot of members but they exist and the EDL leadership would clearly like to see them grow.

The most important national leader, Tommy Robinson, who told this reporter that the Sikhs are the “most English of the English”, demonstrated this absence of racism.

When the media and the political and cultural elites accuse the EDL of racism, they must thinking of something else, namely that the organisation is adamantly opposed to the growing Islamisation of England. But Islam is an ideology and a political practice, not a race, as several members were keen to point out.

The EDL is entirely working-class in outlook and demeanour and proudly so. Their sole political objective appears to be the defence of English — sometimes referred to as Christian — culture against Islamic encroachment. They despise the current British left but mainly because it is being subservient to Islamic interests. They have no trust in the official political leaders, who they consider to be sell-outs.

One is reminded of George Orwell’s observation:

If there is any hope at all, it has to come from the proles.

Nobody this reporter spoke to — leaders as well as rank and file — has any sympathy with English Nazis or with The British National Party, which they consider racist in the traditional sense of the term. Adherents of totalitarian or racialist ideologies are unceremoniously evicted.

It is very difficult to judge the size of the national following. I heard various figures — 30,000 was mentioned — but as far as I can tell, no records are kept.

Perhaps there is a tendency to exaggerate. The leader of the East London division said that the EDL has only 180 activists in the capital. The organisation’s main strength appears to be in the Midlands and the North of the country.

The EDL leadership can most fairly be described as charismatic. The leaders are those who can think and speak and have proved their mettle in concrete action.

That is undoubtedly the only form of organisation possible at this stage. The EDL is utterly vulnerable to infiltration by police agents and others who would like nothing better than to derail it and make it engage in self-destructive, violent and illegal activities that can then be used as a pretext for a clamp down.

It is already eminently clear that the authorities are using and will use any trick in the book to squash the EDL including police harassment and attempts by the Inland Revenue Service to financially ruin its leaders.

Tommy Robinson is currently under investigation for violent assault and money laundering — charges that he says are trumped up.

“We are a bit rough”, Robinson recently admitted to a gathering of his followers in London. But as far as this reporter could tell, nowhere near as rough as the so-called “antifascists” that try to foment violence every time the EDL stages a demonstration — and certainly not compared to the Muslim thugs that have long ruled by violence in so many English cities.

The EDL can best be described as a working-class “band of brothers” determined to preserve their way of life. They are not intellectuals and may know little about the details of English history but they have a deep sense of what that history is about. Any outsider with ill motives trying to impose himself will stand out like a sore thumb.

The EDL leadership and rank and file clearly know all they need to know about Islam. This reporter was particularly impressed by their ability to connect a general analysis of Islamic ideology and modus operandi with street wisdom — or expressed differently: to see the deep implications of any deference to Islamic cultural demands — such as the building of mega-mosques or the introduction of “medieval toilets” for Muslims in supermarkets.

They also have a keen sense that Muslim street crime should be seen as part of a wider strategy to undermine English society.

EDL members on a run-down estate in Luton characterised Muslim drug dealing as a “chemical jihad”. After gangs of Muslims have started pushing their wares on white youngsters, every bloke on the estate has a friend who is hooked on heroin.

A female pub owner from the neighbourhood agrees. “They come here most every night right across the street and sell their heroin. The police know all about it but don’t lift a finger.”

The organisation can undoubtedly use a few intellectuals as analysts, experts, legal advisors, office personnel and the like but if it gives up its working-class leadership and permits well-meaning intellectuals to call the shots, it will become a vastly different type of organisation.

One must seriously doubt whether the EDL can survive in its present form. Leaders and activists are wearing themselves out with all the work they are trying to accomplish and one gets the impression that their missuses are not happy. On top of that they have to earn a living in their civilian trades. Unless the EDL gets sufficiently organised to pay its officers a living salary and hires some office personnel to help them out, the end will be in sight.

Given the size of the ground-level support the EDL is undoubtedly enjoying, it should not be impossible to generate funds for a more professional organisation. One of the London leaders told this reporter that many of his mates at work agree with him but dare not cross the line to openly commit themselves. But they could certainly pay a few quid a week to support the cause. That has been done before in numerous battles around the world.

Historically 99 out of 100 peoples’ movements have come to naught — with their leaders in jail and their supporters dispirited.

There is no doubt that everything will be done to crush the EDL because the British government must be aware that if the EDL survives, it will force the authorities to openly choose sides: Islam or England.

If, however, the EDL can survive, stay the course and maintain its strength for just a few years, the battle will have been won.

49 thoughts on “A Danish View of the EDL”