Much public concern about Islam is focused — with good reason — on Iran, Pakistan, and Saudi Arabia. Turkey, however, is an Islamic dark horse. We tend to think of it as Western, secular, and not a threat, but this is a mistake. It is dangerous not just because it has poured millions of unassimilated immigrants into Western Europe (and Milli Görüs along with them), but also because it is a member of NATO with a population that is relatively well-educated and in the midst of an Islamic revival.

Part of that revival involves the dream of a new Caliphate in the form of an Ottoman Empire upgraded for the 21st century. With the OIC — headed by a Turk, Ekmeleddin Ihsanoglu — gathering the Ummah together, the nascent Caliphate is ready to burst forth.

Turkish prime minister Recep Tayyip Erdogan has obvious ambitions to become the Sultan of the Ottoman Empire reborn. He and Mr. Ihsanoglu may have to duke it out to decide which one is to assume the throne of the Caliph.

Many thanks to JLH for translating the following essay about Turkey from Politically Incorrect. 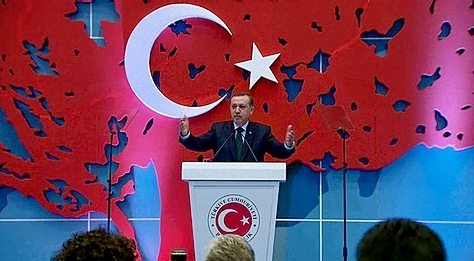 Erdogan: “We Are Now the World Power Turkey”

It is an eerie scene with great symbolic power: the Turkish leader stands on a stage in front of a large world map from which sprouts an oversized tree with the Turkish flag. Prime Minister Recep Tayyip Erdogan invited politicians of Turkish descent from all of Europe to this “world congress” in Istanbul, to initiate them into his policies. And these seem to be directed toward a new Ottoman Empire.

Original pictures of this incendiary event were “controversially” published in BR magazine. The reporter tells us that great-power-politics was being practiced here, with the motto: “Turks of all lands, unite.” With perfect seriousness, Erdogan said: “We are now the world power Turkey. Everyone should know that. Turkey is no longer a country whose agenda is set from outside, but a country that sets the agenda in the world.”

Eyewitness Ali Ertan Toprak, vice-president of the Alevite community of Germany, reported that the 1500-2000 politicians present were urged to “inoculate” the European culture with the Turkish in order to “Turkicise” these countries. Video follows [see the PI post for the video].

Only one representative from Germany spoke — the deputy general secretary of Milli Görüs, Mustafa Yeneroglu. Is it really necessary to mention that this organization is being surveilled in Germany because of activities dangerous to democracy?

Erdogan made unmistakably clear that “Islamophobia” in his opinion is a “crime against humanity.” This pugnacious concept, created by Ayatollah Khomeini, is intended to strangle Islam criticism in its cradle. An important element of Erdogan’s overall strategy of reaching out from Turkey to Islamize and Turkicize Germany. The deeply devout Erdogan may with assurance be defined as a fundamentalist. As a youth, he was a member of the radical Islamic organization Akincilar Dernegi. Erdogan is considered a political foster son Necmettin Erbakans and also belonged to the Milli Görüs movement. From 1994-1998, he was mayor of Istanbul and deputy chair of the Welfare Party RP, which was accused of being sympathetic to jihad and to the introduction of sharia. In 1998, this party was banned by the Turkish supreme court. Erdogan was banned for life from politics and sat in jail for ten months. The basis for the judgment was a speech with the legendary passage: “Democracy is only the train we board until we reach our goal. The mosques are our barracks, the minarets are our bayonets, the domes are our helmets, and the faithful are our soldiers.”
– – – – – – – – –
This tactic of serving democracy in order to do away with it and construct a dictatorship is

only too familiar to us from the final phase of the Weimar Republic, when it was infiltrated by the Nazis. In startlingly similar form, the chief propagandist of the NSDP, Joseph Goebbels, said, at the end of the 1920s: “We are entering the Reichstag, the arsenal of democracy, to arm ourselves with their own weapons. We are becoming Reichstag representatives in order to paralyze their basic convictions, and with their own support. If democracy is so stupid as to give us traveling passes and per diem allowances to do them this disservice, that is their affair.”

Thus, horrifying parallels between Islam and National Socialism become obvious. Both are totalitarian ideologies with a drive for absolute power. The world domination fantasies of the Nazis — “Today Germany belongs to us, tomorrow the world” — resemble Islam’s demands for comprehensive global power as formulated in the Koran:

Sura 2, verse 115: To Allah belong the East and the West; wherever you turn, there is the face of Allah. Verily, Allah is all-embracing, all-knowing.

Sura 8, verse 39: Fight against them until there is no persecution any longer and all of religion is Allah’s. However, if you cease, Allah will surely see what you do.

Sura 4 8, verse 28: It is He, Who has sent His ambassadors with guidance and the true religion, so that he causes them to conquer every other religion. And Allah suffices as witness.

A further commonality of the ideologies is a deep-seated anti-Semitism. Irrational hatred of Jews is a thread running through “Mein Kampf” as well as the Koran. The prophet Mohammed despised the Jews because they would not accept his new religion. He had at least 600 captured Jews in Medina beheaded. Mohammed gave his fury free rein in many verses:

Sura 2, verse 88: And they said: “Our hearts are without feeling.” But no! Allah has cursed them because of their unbelief. That is why they have little faith.

Sura 5, verse 60: That is: “Shall I teach you whose reward with Allah is still worse than that? It is those whom Allah has cursed and at whom his ire is directed, and whom he has made into apes, pigs and idol worshippers. They are in a much worse position and have wandered further from the path of righteousness.

In the hadiths, for example, in “The Tumult and Signs of the Times,” it is expressed even more clearly:

Abu Huraira, may Allah’s good will be upon him, reported: The Messenger of Allah, Allah’s blessing and salvation be upon him, said: The hour will not come until the Muslims have fought against and killed the Jews for so long that the Jew hides behind the stone and the tree. Then the stone or the tree says: Oh, Muslim! Servant of Allah! This is a Jew behind me; come and kill him!

This passage is immortalized in article 7 of the Hamas Charter. Who is surprised anymore at the fanatic, uncompromising, irrational battle of the Arab world against Israel?

In the face of many commonalities, it is also not surprising that Mein Kampf was a bestseller in Turkey until 2007, until sale was stopped on the initiative of the Bavarian state government. Believe it or not, the hate and bias book ranked number three on the Turkish bestseller list in 2007. The Nazis’ blood-and-soil ideology does not seem alien to Turkey. The deep red Turkish flag of legend was patterned on a lake tinted by the blood of Turkish fighters.

Sura 5, verse 51: Oh, you, you who believe! Do not take the Jews and Christians as your protectors. They are each other’s protectors. Whoever of you takes them as protectors truly belongs to them. Verily, Allah does not show the people of the unrighteous the path.

Like National Socialism, Islam requires battling dissenters, wishes to subjugate them and then pillage them.

Sura 98, verse 6: The infidels among the people of the Book and the idolators will enter the fire of Hell and remain there forever; for these are the worst of creatures.

Sura 9, verse 28: Oh, you who believe, the idolators are in truth impure, so they shall never approach the protected places of prayer, after this, your year.

The leader principle (Führerprinzip) with Hitler as unconditional ruler also applies in Islam, for the prophet Mohammed was both spiritual and worldly absolute ruler. After his death, the caliphs and ayatollahs assumed this position. Persecution, imprisoning and murder of homosexuals is also similar. Persecution and murder of dissidents, respectively apostates, is also comparable in both rigidly led ideologies. In Hadith Bukhari V4 B52 N260, as reported by Ikrima, Mohammed commanded: “If a Muslim leaves his religion, kill him.” Any opposition, each and every differing conviction is brutally suppressed. Women are utilized as child-bearing machines for the vigorous growth of the community. This was encouraged by National Socialism through awarding the special medal, the “mother cross.” In Islam it is confirmed by the Koran sura 2, verse 223: “Your women are an arable field for you; therefore, cultivate your field as you will. But send something good for yourself in advance. And fear Allah and know that you will meet him. And tell the faithful the joyful news.”

Thus what came together what belongs together when Mohammed Amin al-Husseini, the Grand Mufti of Jerusalem — at that time one of the highest Islamic authorities in the world — made common cause with Hitler beginning in 1941.

“Here was the new Koran of faith and war: turgid, verbose, shapeless, but pregnant with its message.” With that, he was the first to make this comparison and made Islam equivalent to National Socialism. The well-read and cultured Briton received the Nobel Prize for literature in 1954 for his books on WWII. We should remember him, instead of slandering clear-thinking people like Geert Wilders and Dr, Thilo Sarrazin,

Because the threat we are facing is far greater than recognized at the moment.

(All Koran verses are authentic German translations from the internet site of the Muslim Central Council [and have then been translated into English].)

4 thoughts on “The Ottoman Empire Reborn”