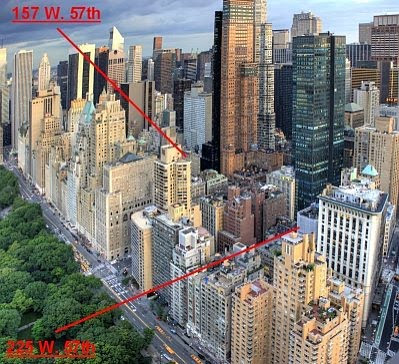 The brouhaha over the proposed Ground Zero mosque occupies most of the column inches, but that doesn’t mean that other less notorious Muslim Brotherhood real estate ventures aren’t of equal (or greater) consequence to New York City and the rest of the country.

Wealthy Middle Eastern businessmen are quietly and continuously establishing partnerships and joint ventures in the United States to launch ambitious building projects of all kinds. Some of them — the Islamic centers and mosques — are directly related to Islamic da’wa, or proselytization. Others are simply lucrative, and serve the Muslim Brotherhood more indirectly by being profitable. Funneling money back to the sheikhs in Saudi Arabia and the Emirates is also useful to the Great Jihad.

Regular GoV reader Heroyalwhyness did a little digging and collected some information about the Muslim building boom in New York City. Much of the information below is derived from the SkyscraperPage forum. She sent this in a while ago, but I just got around to organizing and formatting it.

I don’t have anything concrete (pun intended)… but here are some dots — culled from construction blogs and financial papers to consider and explore further. We know Mayor Bloomberg is expanding his financial arm into sharia compliant finance, as is Carnegie.

“Here’s a point nobody is mentioning and one that is still confusing me — this organization has 100 million dollars to build this mosque. They are building it in a commercial area with a very low residential density that probably has a few families of practicing Muslims (if any at all). They say they aspire to be a community center akin to the 92st Y (which is built in a highly residential neighborhood) yet they continue to try to build it specifically here. If you have a 100 million to build this ‘community center’ you can essentially afford to build one anywhere in the city, in locations where this center might actually be used by people of the Muslim faith. Instead they keep pushing on building it right by the WTC.”

The photo at the top of this post is just a tiny sample. Check out the original larger photos: Photo 1, Photo 2.

— from “Surreal Estate” by Be Bop Deluxe