Below is another in an occasional series of essays by our British correspondent Seneca III. 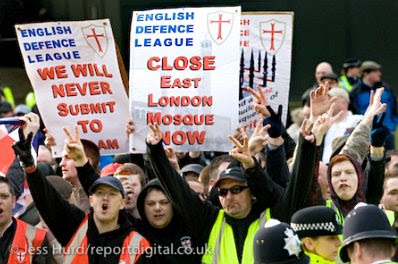 Musings on the Winds of Change
by Seneca III

I have a feeling, just a feeling, that the West is finally reacting to the long suppressed realities of the human abomination that is Islam. In Britain the horrors extant within and without the occupied territories established in our midst surface almost daily, as an era of draconian censorship and disinformation implodes with some rapidity.

This new public awareness marks a distinct sea change and reshapes our conception of how we must proceed in our fight for cultural and personal survival. We appear at last to be waging guerrilla war on the two principal weapons deployed against us — the malignantly constructed incubus and succubus of political correctness and faux multiculturalism that have been raping our minds during the long, dark night of our indulgence.

It is as if after several decades of a tide falling towards the low water mark the jagged reef is fully exposed. Now, after a period of slack water, what is happening is perhaps the first, faint, gentle tug of a rising tide that may grow, possibly exponentially, into a raging tsunami of reconstruction.

And this is not simply wishful thinking, for deep in our collective European history there exist many precedents, each being a solution specific to its milieu yet each a conflagration ignited by similar circumstantial sparks. (And I do not refer to Nazi Germany; Hitler was but a modern re-incarnation of Mohammed, and his National Socialism simply Islam without recourse to Allah.)

And, yes, it will not be easy, and nor will it be nice. It is, however, highly probable, because several generations of affluent cowardice, abjectly dressed with subliminal guilt, have concealed the reality that events in history are a lot closer than they appear. Now that the mist is thinning we at last begin to understand what we must do. Again.

In the meantime, restrained as we are by a secular legal system designed to protect us from ourselves but now used by others as an instrument of our destruction, we must let the Umma build as many Mosques, Madrassas, Terror Training Camps and uni-cultural Jihadi propaganda centres as they wish.

Let them impose upon our lands their ghettos and no-go areas and overpopulate them with the genetically retarded products of their primitive, consanguineous breeding practices — at our expense, of course.

Let them grow their beards and bang their heads on the floor until their foreheads swell with those identifying cicatrices that mark the vacuous minds of the brain-dead.

Let them robe their female trade goods in the black of slavery and let them kill their own children in the name of ‘honour’. Provided they leave ours alone.

Let them burn effigies of us and trample upon the emblems and manifestations of our way of life whilst simultaneously puling about ‘racism’ and ‘insulting the Prophet’.
– – – – – – – – –
Let them whine about ‘Islamophobia’ as in the background resonate the deadly fatawa that issue from the mouths of the Imamate and replicate, uncontested, on the placards of their foot soldiers whom appear forever free to parade their threats publicly without fear of prohibition or retribution.

“What!” you exclaim. “Why should we do this, why encourage them? It’s ethnic and cultural suicide!” and I answer, “Let them, for by these things shall we know them.
“Then when, if ever, should come that bright, shining (Friday?) morning where sufficient of us wake up and decide that we are no longer invertebrates we will be able to thrust aside our craven, Sharia-enabling governing classes and take our countries back. And the grim upside of the policy of ‘Let them’ is that we will most certainly know how to identify and where, precisely, to find them. ”

Why must this be so? Because any rational analysis of the situation begs the appalling conclusion that there is no longer any other solution possible — the demented slaves of Allah will not allow one because their book and their priesthood tell them they cannot accept anything but absolute victory for their god. The conversion, enslavement or elimination of all non-Muslims is the only permitted objective. Integration and peaceful cohabitation with the rest of our species are anathema to them, for everything in the Quran and the Hadith forbids it.

Thus, with morbid inevitability it has come to pass that only at the figurative point of a sword shall we be able to eject this foetid ideology suppurating within our body politic, despite the shadow that such an action will imprint upon our memory in the historic record. However, that at least our descendents will be able to survive, perhaps with unease but survive they will in freedom, which is something they will not be able to do if Islam prevails.

Sad, is it not, that this is the only option left open to us? Unless… unless they chose to leave us of their own free will carrying with them, if they must, the spoils and loot of their occupation?

Ah, now that would be a wonderful thing, a cheap price for us to pay, but I doubt matters will resolve that easily, and those who are finally forced to seize the feral moment must fortify themselves with the knowledge that that moment is not of their own making.

12 thoughts on “Musings on the Winds of Change”