“It’s impossible to get enough revenge.” 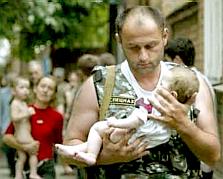 Six years ago today a group of Muslim terrorists took more than a thousand hostages in a school in Beslan, in the Russian Caucasus. That was the beginning of a three-day standoff that became the Beslan Atrocity. Nearly four hundred people were killed, many of them children, and hundreds more were injured.

To make sure that we all remember why we fight this war, Vlad Tepes recommends watching an hour-long BBC documentary about Beslan. The story of the siege is recounted impressionistically by children who survived.

Vlad has posted all six parts at his blog.

Sensitive viewers should take note: these videos are very, very difficult to watch. To hear what was done to these children, as told in their own words, is almost impossible to bear.

In some ways Beslan is more horrible than 9-11, because children were targeted deliberately, and were brutalized up close for three hellish days. The documentary brings home the fact that permanent, irremediable damage was done to the surviving children and their families. Those three days in the school gym were not something that anyone can ever fully recover from.

It was one of the greatest barbarities of modern times, and can be credited — as so many others can — to Islam.

8 thoughts on “A Place of Mourning”