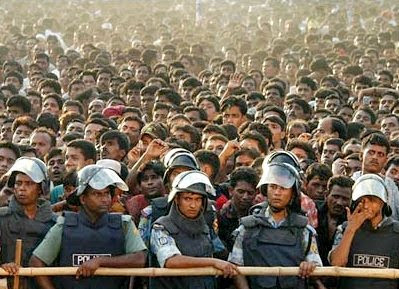 For several years there has been a quiet but intense debate among American conservatives about the nature of the Islamic menace that we all face. The majority of right-wingers, no matter how dedicated they are to fighting “Islamism” in Iraq, Afghanistan, Pakistan, or Iran, are reluctant to consider the possibility that we may be at war with all of Islam, and not just “radical” or “political” Islam.

And I can’t really blame them for their reluctance. Who wants to face the prospect of a decades-long twilight struggle against 1.5 billion people? Especially when that number increases every second as they rapidly whelp out more of the same.

Our British correspondent JP sends a blog post and a couple of its accompanying comments to illustrate the dilemma facing well-intentioned conservatives on his side of the Atlantic. He says:

The Coffeehouse blog post below has been bugging me since it first appeared last Thursday — in particular the quote “If the war on terror becomes a war on Islam, it is a war that we lose”.

I woke up about 3 am last night with the thought that Islam itself is responsible for fostering this illusion among Western opinion-makers — that it is invincible and that any war against it is unthinkable. Perhaps it is because I am re-reading Tolkien at the moment — but Islam is too dangerous and evil to be toyed with in the manner Forsyth recommends.

From the Cofeehouse blog in the Spectator:

The worrying opposition to the ‘Ground Zero mosque’

I’m a neo-conservative, a hawk in the war against Islamist extremism, which is why I’m so worried by the opposition to the building of a mosque near Ground Zero. A new poll shows that 61 percent of Americans oppose its construction and Howard Dean, the tribune of the Democratic wing of the Democratic party, and Harry Reid, the Democratic Senate Majority Leader, have joined many leading Republicans in arguing that the mosque should not be built there, several blocks from Ground Zero.

If the war on terror becomes a war on Islam, it is a war that we lose: George W. Bush may have had his faults but this is something that he understood. The way that this debate over the mosque is going is playing into the whole clash of civilizations narrative and strengthening the hand of those who seek to promote it.

The struggle to foster democratic, open societies in countries that have never known such freedom will last generations. It is a conflict that is more about ideas and moral suasion than military force, though force will obviously have a role. Our aim should be to boost the reformist elements in Islam, to offer what help we can to those who believe that Islam and liberal democracy can be compatible. If the West appears to be anti-Islam rather than just anti-Islamism, then we will not be able to do that.

In the comments, Dixon says:

Who are these “mainstream Muslims”? What exactly do they want? Opinion polls consistently show that in this country two thirds of them at least want to see an end to Western ethical values and the introduction of Sharia. OK, so they don’t want to do it violently. So what? They are on exactly the same side in this conflict as those that do. They only differ in their preferred tactics. So far, they are winning all hands down without any acts of violence being necessary.

The only hope that Western ethical values have of surviving is if Islam waned due to its rejection by the young as a result of clear assertion of Western values in education. It’ll never happen. Instead, British schools now downplay evolution theory as a placation towards Muslim “sensibilities”. Britain, as the rest of Western Europe, is inevitably going to have a population that is overwhelmingly of Muslim descent, well inside fifty years. On current trends, they will be more reactionary and zealous than their parents or grand-parents.

Personally, I think its hilarious. To watch people trying to deny the tide lapping at their ankles. It goes beyond King Canute into realms of sublime absurdity and wishful thinking. I won’t be around to suffer the second class status that non-Muslims will in a few decades endure. Many of the willfully blind who stifled secular resistance to this Islamification of a continent will be as will their children. Their daughters half the value of their sons and all taught that they are inferior as “kuffar”, a word as vile and loaded when spat out by a Muslim as the “N” word when uttered by a cracker-barrel red-neck. Of course, most of the descendents of anyone reading this or commenting here will be Muslim.

[For non-Coffeehouse readers, ‘Seacole’ in the above name refers to Mary Seacole, an icon or saint of British multiculturalism. At one point during 2009, Rod Liddle, a Coffeehouse blogger, declared that he had changed his online name to rod seacole liddle in honour of this worthy person, and a number of his readers followed suit.]

Dixon: thanks for the Wafa Sultan clip. Powerful stuff, that well and truly gives the lie to the nonsense we are subjected to by the likes of Massie, Forsyth, and so many others.

I don’t know what the most effective strategy for countering the threats posed by Islam are, but I do know that the mixture of lies and deception we get from much of the media and many politicians, together with blatant denials that any threat exists, is not the right place to start.

Another thought: when all our liberal amateur Islam sleuths talk of “moderate Islam”, I can’t help thinking that perhaps what they inadvertently have in mind is lapsed Muslims. The ones who’re happy to go for a beer, marry a foreigner, and basically just get on with their lives in whatever country they’ve emigrated to.

And I for one would always be pleased to raise a glass with them.

I’ve spent six years looking for the “moderate Muslim”, and every time I think I’ve found one, it turns out to be a “lapsed Muslim” as described above. An apostate in all but name, in other words.

Muslims who want to live that way, who would to prefer to act like normal Westerners, have to be very careful. To the truly faithful Muslim — which means any Muslim who consciously follows the tenets of sharia law — a fellow Muslim who fails to adhere to any aspect of Islamic law is guilty of kufr, or unbelief. Kufr is equivalent to apostasy, and the penalty is death.

Whenever a schismatic sect develops within Islam — such as the Baha’is, the Qaranis, the Ahmadis, etc. — its adherents are persecuted ruthlessly, and exterminated if possible. Islam is a near-perfect closed system, and does not allow for any theological variation or doctrinal evolution.

This doesn’t mean that there aren’t hundreds of millions of Muslims who would like to escape, if only they could find a way. That’s why I consider making the world safe for apostasy one of our most urgent tasks.

I’ll have more to say about this and related matters at a later date.