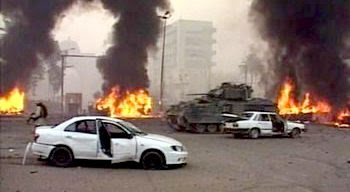 Our expatriate Russian correspondent Russkiy has been studying Arabic, and understands the language well enough to follow the discussion in various Arabic-language forums. Here’s his report on some of the Muslim commentary concerning recent events in Iraq:

This is something I believe GoV readers may find interesting. When a bombing happens in Iraq, the BBC Arabic service usually publishes a poll questioning the opinions of Arabs concerning the latest events and the future if Iraq. In response, non-Iraqi Arabs typically post rubbish such as: “Look what your democracy has brought! The deaths of children, women, old people, etc.”

However, I have noticed that more thoughtful comments are posted mainly by Iraqi commenters. Here’s an example from a BBC News Forum thread:

A very important, simple and clear question must be asked; the answer to it will explain the deterioration of security and general conditions of Iraq. The question is: what is the identity and what are the beliefs of the person who has blown himself up and killed tens of people?

Is he a Zionist or an American? Or is he of an Arab of Muslim background?

Did he pray consistently, read the Quran, cry out in fear of Allah, and in general fast during the month of Ramadan?

9 thoughts on “Turning the Truth Upside Down”