Yesterday I posted Sergei Bourachaga’s essay about the Pope’s visit to Turkey in 2006. Today the author wrote me with some additional thoughts inspired by the response to his piece:

I noticed that most of the comments made on the article address the issue of the indifference adopted by the Vatican and the Christian world about Islamic militancy. Apropos of this phenomenon, I would like everyone to consider an insulting painting of the Christ on the back of a pig.

Nothing was said or done by Christians on the European continent about this provocative tasteless piece of art. If the artist had instead painted the prophet Mohammed on the back of a pig, at a minimum riots would have erupted all over Europe.

[Since many Christians may find this work of “art” offensive, I have placed the image below the jump. — BB] 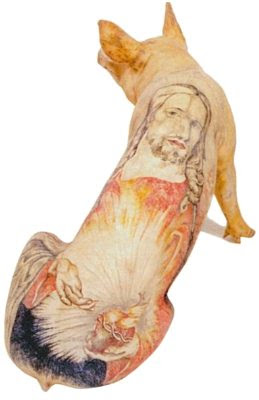 What you see above is the work of the Belgian artist Wim Delvoye that has been displayed in several art studios in Europe since 2005. Had the artist dared to select Mohammed for his subject, we would have seen riots and bloodshed in the major capitals of the world.

We Christians strongly believe in tolerance, and this is what British novelist Dorothy Sayers pointed out about “Tolerance”:

17 thoughts on “The Sin That Believes in Nothing”