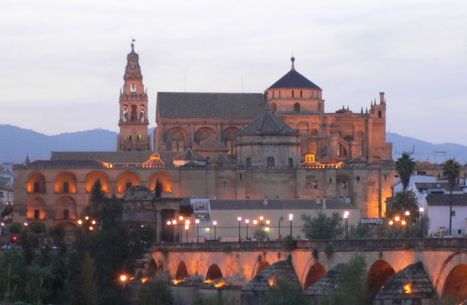 During the recent controversy over Córdoba House — better known as the Ground Zero mosque — a frequently recurring theme, replayed over and over again in the mainstream media, is that “Córdoba” refers to the “golden age of al-Andalus”, and not to the destruction of Christian culture in Iberia. The Córdoba mosque allegedly represents the high point of Islamic civilization in Spain, when all three “Abrahamic faiths” lived in harmony under the enlightened rule of the Umayyad Caliphate.

The fact that almost very media outlet peddles the same line tells us that they are all taking their talking points from CAIR, ISNA, MPAC, ASMA, etc. The “voluntary” nature of Christian submission in Córdoba is a Muslim Brotherhood meme, and the MSM has bought it hook, line, and sinker.

Unfortunately for the credulous and gullible amongst us, the entire story is bogus. The myth of “the Golden Age of Islam” in Iberia is just that, a myth.

Dr. Andrew Bostom is more than capable of doing the research necessary to refute the this media whitewash. In fact, he already has:

Reinhart Dozy (1820-1883), the great Orientalist scholar and Islamophile (i.e., by any objective standard, notwithstanding Ghosh’s uncontrolled spraying of the ridiculous charge of “Islamophobia”), wrote a four volume magnum opus (published in 1861 and translated into English by Francis Griffin Stokes in 1913), Histoire des Musselmans d’Espagne [“A History of the Muslims in Spain”]. Pace Ghosh’s distorted reportage, here is Dozy’s historical account of the mid-8th century “conversion” of a Cordovan cathedral to a mosque:

All the churches in that city [Cordova] had been destroyed except the cathedral, dedicated to Saint Vincent, but the possession of this fane [church or temple] had been guaranteed by treaty. For several years the treaty was observed; but when the population of Cordova was increased by the arrival of Syrian Arabs [i.e., Muslims], the mosques did not provide sufficient accommodation for the newcomers, and the Syrians considered it would be well for them to adopt the plan which had been carried out at Damascus, Emesa [Homs], and other towns in their own country, of appropriating half of the cathedral and using it as a mosque. The [Muslim] Government having approved of the scheme, the Christians were compelled to hand over half of the edifice. This was clearly an act of spoliation, as well as an infraction of the treaty. Some years later, Abd-er Rahman I [i.e., the “Muslim prince” in Ghosh’s redacted narrative] requested the Christians to sell him the other half. This they firmly refused to do, pointing out that if they did so they would not possess a single place of worship. Abd-er Rahman, however, insisted, and a bargain was struck by which the Christians ceded their cathedral…

Indeed by the end of the eighth century, the brutal Muslim jihad conquest of North Africa and of Andalusia had imposed rigorous Maliki jurisprudence as the predominant school of Muslim law. Thus, as Evariste Lévi-Provençal (1894-1956) — the greatest modern scholar of Muslim Spain whose Histoire de l’Espagne Musulmane remains a defining work — observed three quarters of a century ago:

The Muslim Andalusian state thus appears from its earliest origins as the defender and champion of a jealous orthodoxy, more and more ossified in a blind respect for a rigid doctrine, suspecting and condemning in advance the least effort of rational speculation.

For example, the contemporary scholar J.M. Safran discusses an early codification of the rules of the marketplace (where Muslims and non-Muslims would be most likely to interact), written by al-Kinani (d. 901), a student of the Cordovan jurist Ibn Habib (d. 853), “.known as the scholar of Spain par excellence,” who was also one of the most ardent proponents of Maliki doctrine in Muslim Spain:

…the problem arises of “the Jew or Christian who is discovered trying to blend with the Muslims by not wearing the riqa [cloth patch, which might be required to have an emblem of an ape for a Jew, or a pig for a Christian] or z?unnar [belt].” Kinani’s insistence that Jews and Christians wear the distinguishing piece of cloth or belt required of them is an instance of a legally defined sartorial differentiation being reconfirmed…His insistence may have had as much to do with concerns for ritual purity and food prohibitions as for the visible representation of social and political hierarchy, and it reinforced limits of intercommunal relations.

Read the rest of the historical evidence at Dr. Bostom’s place.

The myth of a tolerant al-Andalus will, alas, never be dispelled by the Western media. The imperative of the multicultural “narrative” mitigates against any true understanding of history. It requires our cultural elites to accept the CAIR version of events, and mere historical evidence is not enough to change that. We will, as usual, have to work around the MSM.

The last word, as cited by Dr. Bostom, comes from the late Richard Fletcher: “Moorish Spain was not a tolerant and enlightened society even in its most cultivated epoch.”

11 thoughts on “The Media Myth of Córdoba”