The article below is a loose translation by our expatriate Russian correspondent Russkiy of a piece that appeared on a Saudi site during the presidential primary season back in 2008.

What is interesting about this article is not whether President Obama is secretly a Muslim — the debate about that is raging even now — but the fact that the author and his readers appear to believe that it is true, or at least a distinct possibility.

As it turned out, there was no need to worry about Obama’s prospects. He outmaneuvered Hillary, and then the corrupt Democratic Party machine elected him. No amount of evidence — either then or since — of his obsequious devotion to Islam has hurt his popularity. The economy and his socialist policies have dragged him down, but he has a full Teflon coating as far as Islam is concerned. The Husseinization of America proceeds apace.

Many thanks to Russkiy for translating this article. The translator has highlighted those portions of the text that he considers notable: 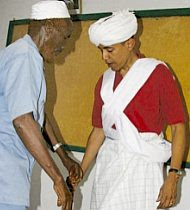 The image which appeared recently of Barack Hussein Obama wearing traditional Islamic clothing, accompanied by a Somali religious leader, has steered emotions and caused a wave of severe disapproval amongst American voters. A similar wave of anger and discontent came from Obama supporters, who accused his opponent Hillary Clinton of trying to tarnish his reputation by means of leaking this image to the public. Obama, in response to the rumour of his being a closet Muslim, has made an official statement, denying the rumours suggesting he a Muslim and stated that he has in fact been a devout Christian for more than twenty years, and that he regularly attends church services.

The sad part in all this is the fact that if he is indeed a Muslim, he has to resort to taqiyya and concealment in order to keep his chances of becoming president alive. In the light of September 11 events, and following the barrage of images, in which firebrand Islamic clerics incite terrorism, while at the same time no religious authority to this day has come out to condemn any of the major terrorist attacks and refute religious justifications terrorists rely upon in order to recruit followers, Islam has become associated with terrorism. The followers of Islam are now seen as crazy lunatics full of hate, intent on fighting the entire world, while at the same time being unable to manage their own affairs and reconcile themselves with the modernity. All this has blackened the face of Islam to such an extent that it became a liability and a sure thing to destroy campaign chances of the hopeful presidential nominee.

These stupid terrorist fools do not realise and are incapable of appreciating such a rare and precious opportunity for a Muslim to occupy the Oval Office. By their actions they probably have ruined chances of this Muslim immigrant from becoming president of the United States.

Of course, the Muslims will self-flagellate, spill tears, and claim that what has happened or what will happen to Obama is a part of a conspiracy against Islam which has been going on for more than 1400 years, and that the people of the world (non-Muslim) are suffering from stupidity and mental deficiency, and that they (the people of the world) do not try to understand them (the Muslims) or understand their message, and deny them their rights and such other hysterical statements, without looking at themselves in the mirror even once, asking themselves, what have we contributed to world civilisation?

The number of Islamophobes is on the increase in the West. This phenomenon is what may help Hillary to be elected as well as potentially result in harshening of immigration, work, and settlement laws, and will make lives of many (Muslims) a nightmare.

The fear of Islam specifically, and not of any other religion, is a tool used by politicians trying to arrive in positions of power. When will Muslims realise the true danger of this development and change their strategy and style of their speeches and dawa, which damage their image and do more harm than good? They have failed (with their current strategy) to achieve any true progress or tangible benefit other than producing that terrible stereotype, association with which becomes sufficient to destroy one’s reputation, and drives one, as in the case of our dear friend Obama, a Kenyan Muslim, to deny any possible relationship with Islam by saying with a straight face, “I am not a Muslim”.

6 thoughts on “A Rare and Precious Opportunity”