Watching Glenn Beck’s “Restoring Honor” Rally yesterday on C-Span, it wasn’t hard to guess ahead of time what the dependable MSM denigrations would be: 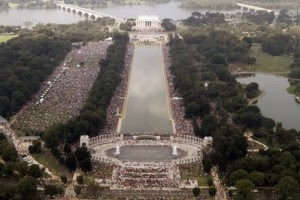 Sure enough, when I opened up Google News to see who said what, the headlines were obvious and predictable. What was a surprise, however, was finding this event to be the lead story; currently it’s at the top of the heap when you access the main page. One presumes this means that the event is currently drawing the most hits? Isn’t that how Google ranks its stories in the news section?

You can scroll through the headlines at Google and see those four predictions borne out in the attitudes toward the story by members of that entity Larwyn calls the Lamestream Media.

Because Americans generally aren’t taught their own history, and often don’t know how to go about learning it from original sources, they’re stuck with what the media says, and often was the media says is full of bias while being studiously empty of real content.

Beck’s rally could only have deeply embarrassed and angered them. He trampled their boundaries: talked about religion, shed some tears, got personal about his own failings, and sermonized about — gasp! — looking for the good in ourselves and in one another.

Robert Costa called it Beck’s Revival. His report is straightforward yet it captures the spirit of this event:
– – – – – – – – –

Beck’s opening theme, calling the assembled to embrace God and remember the traditional, foundational values of the country, was carried on by the ensuing speakers. Calls for unity and inspiration were ubiquitous, interspersed with history lessons, personal testimonials, sermons, and a bit of country music — John Rich and others performed.

“For too long, this country has wandered in darkness,” Beck said, gazing out toward the reflecting pool. “This country has spent far too long worrying about scars and thinking about scars and concentrating on scars. Today, we are going to concentrate on the good things in America, the things that we have accomplished, and the things that we can do tomorrow.”

Beck’s healing message also included numerous citations of the late Dr. Martin Luther King Jr., who gave his famous “I Have a Dream” speech at the site 47 years ago to the day. Dr. Alveda King, the niece of the civil-rights activist, was a featured speaker. Palin, the former governor of Alaska, also addressed King’s legacy. “You have the same steel spine and moral courage as Washington and Lincoln and Martin Luther King,” she told the crowd. “It will sustain you, as it sustained them.”

Ultimately, however, it was Beck’s call for a religious rebirth that dominated. He urged the throngs to “recognize your place to the Creator” and to “realize that He is our king.”

“He is the one who guides and directs our life and protects us,” Beck said, his voice rising. “I ask, not only if you would pray on your knees, but pray on your knees with your door open for your children to see.”

So. An unabashed religious message. A sermon. No wonder the Left loathes him. How dare he mention such subjects in front of the children!

How dare they be so sadly ignorant of what was transpiring yesterday in Washington, D.C. Do “J” schools teach no history at all?? The only other explanation is deliberate obfuscation. But they wouldn’t do that, would they?

To understand the context and to place Glenn Beck in his proper historical perspective, one has to know something about the periods of religious Awakenings that have interspersed American history.

What follows is brief, at least in terms of the subject. The links are to Wikipedia sites because they have the most succinct information in one place, plus extensive bibliographies about each of the periods covered. The overview page explains these phenomena:

The Great Awakening was a religious revival in American religious history. There were three–some say four–such periods of fervor, each characterized by widespread revivals led by evangelical Protestant ministers, a sharp increase of interest in religion, a profound sense of conviction and redemption on the part of those affected, a jump in evangelical church membership, and the formation of new religious movements and denominations. After a generation or so, the fervor calmed and faded away.

It was so much more than that. Here was formed “muscular Christianity” — the practical, hands-on sense of mission which has remained a vital force in American culture. That page also deserves a look.

As a personal example — people we know — our family dentist traveled for many years to India where he helped repair children’s cleft palates. As he’s gotten older, Dr. R goes to less strenuous places where he teaches new techniques to up-and-coming dental students. Here at home, he charges other dentists handsomely for sharing this expertise. In turn, those funds are used to underwrite his work with students in Eastern Europe. In the same way, my family doctor just returned from Africa where she spent three weeks. All year, her group collects free medicines to distribute there. They both do these things without fanfare, year in and year out. You have to dig a little to find out what has inspired these trips. You won’t get a religious message from either of them, but since we’ve known them so long, we know the context.

These two people are just the tip of a large iceberg that goes unnoticed by the press as it searches for the trivial and the ugly and tries to convince us that these aberrations they unearth are the sum of our reality. No wonder people are depressed and worried.

If Beck’s rally is viewed merely as a one-off, a quirk of the Tea Party drones, etc., ad nauseam, this will be directly due to the intellectual poverty of our commentariat. Their ignorance of important parts of American history, their refusal to accept as valid anything which lies beyond their personal belief system, and their overweening hubris prevents them from studying the past in order to understand the present.

Is there a more intellectually bankrupt or morally impoverished group than those who people our Left-dominated institutions — and of whom the media are only the most obvious cu;prits? Can they be reformed and awakened?

26 thoughts on “A History Lesson on America’s Spiritual Yearnings”