Update 6:52pm BST: A photo of one of the accident victims at the scene: 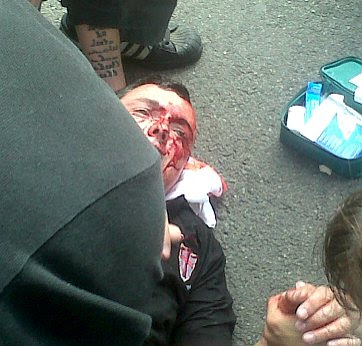 The report accompanying the photo:

That lad in the pic was a local lad. Pablo pulled him out. He was being dealt with by our first aiders then the OB [police] came storming down the road and batoned our first aiders as they were treating him.

Also, Durotrigan has some more video footage of Dudley. Additional photos are here.

From EDL sources, this is a report from an eyewitness to the car incident in which several people were run down and injured. According to rumor, one of the victims died.

We can gather from this account that the trouble began when EDL demonstrators started throwing bricks at cars, and that the ensuing accident was a result of panic rather than intentional hit-and-run. But we’ll need more accounts from eyewitnesses before the picture becomes completely clear.

I’ve cleaned up the spelling and punctuation in the text, and separated some of the long run-on sentences into shorter and more manageable ones. Other than that, this report is as it came to me:

What happened from what I seen:

After all the crap the police did trying to stop us from getting into the town centre, I decided to walk round and see if I could get in from the top end, i.e. by Nettos.

As I was walking round, I met up with a group that was walking up from the other side of Dudley, so I joined them and walked up. They was all in the road and on the path.

The light changed and cars stopped. Some of them picked up bricks and started chucking them at the cars, and smashed the back window on a Golf. The car in front of the Golf, from what I could see, just drove off.

I don’t know who was in the car. As the car drove off they ran over whoever was in front of them. I did see one man go right over the top of the car and land hard on the floor [street] and someone got hit from the side, and the car then drove off.

And another car came out from the side street almost hitting the bloke that went over the car, and they also drove off.

We all ran down to see if the people was OK. There was a lady at the side of the road and the man in the middle. After that everyone was looking after them.

And I thought, enough is enough, and left as the police got there, and went to get my car from where I’d left it. I went back to Tipton to see what had gone on, and to find out if they was OK or what ever. And I was told that they had died.

I hope this helps as its what I seen with out anything added.

What I can say is it was what them lads did that made what happened happen. Coz to me it looked like they drove off in panic, not to harm anyone, and it was a tragic accident, but I don’t know for sure, as I didn’t see the driver.

I do know the driver in the Golf was white, and didn’t deserve his window being done.

15 thoughts on “Updates on Yesterday’s Demo in Dudley”