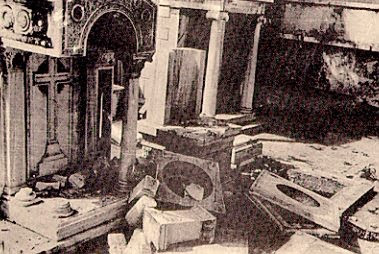 A Greek-American historian who writes pseudonymously as “The American Patriot” contributes a guest essay on the historical relationship between Turkey and its Greek minority, culminating in the Istanbul Pogrom of 1955.

The threat to Greece: What happens if Turkey is allowed to join the European Union?

By The American Patriot

In 1071 A.D. the Byzantine army, along with its mercenaries, encountered the armed forces of the Seljuk Turkish Sultan Alps Arslen, and suffered a complete military defeat in the battle of Manzikert.

The Anatolian plateau is very similar to the Eurasian steppe where the nomadic Turkic tribes originated. Within only eighty years after 1071 the nomadic Turks immigrated en masse into Byzantine/Roman territory, leaving a path of destruction behind them. At one time Christians were in the majority in what is now Turkey, but today about 99% of the population is Muslim.

While most modern Turks would not resort to those same levels of brutality, the Turkish government has sponsored such violence towards its minorities in the name of nationalism.

Should Turkey be allowed to join the European Union? If Turkey joins the EU, then Muslim immigration into Greece and the rest of Europe, coupled with Europe’s declining birthrate, would greatly increase the Muslim proportion of the population. Eventually the Muslims might well outnumber the natives.

An historical example of the same process may be found in the Coptic Christians of Egypt. As recently as the Crusades Coptic Christians were the majority, and now they are a despised minority. Could this become the fate of the Greek people under the threat of Islamization? The Coptic Christians are the indigenous people of Egypt, and they were conquered by the armies of Islam in the 7th century AD. They were forced to submit to Islamic law (sharia), and many converted to Islam over time.

Under sharia, non-believer who refuses to submit is subject to enslavement or death. The Coptic Christians were by threat of violence forced to submit and pay a tax. By the same token, with the decline of their birth rate, the Greeks could one day be outnumbered by the Muslims and find themselves in the same environment the Coptic Christians experienced centuries before. With the Islamization of Greece, Muslims could quickly take over without firing a shot, needing only their sheer numbers. History will repeat itself, and the Muslims will force the unbelievers to submit to their new masters or face persecution.

Greeks around the world must wake up and, in the words of Michael Savage, fight for their borders, language, and culture. This is not a fate that only Greeks might face, but also the rest of Europe and North America. The Qur’an is clear about the place of the non-believer under Islamic law: “O Prophet! Strive against the disbelievers and the hypocrites! Be harsh with them. Their ultimate abode is hell, a hapless journey’s end.” (Qur’an 9:73, Pitckthall)

What they must fear

An historical example of Islamic intolerance, under the guise of nationalism, was the Turkish expulsion of Greeks in Istanbul and on the islands of Imbros and Tenedos in the 1950s. In the mid-1950s a bomb exploded inside the Turkish Consulate in Salonika, Greece. The consulate was located next to the birthplace of Turkey’s national hero Kemal Ataturk, and was a Mount Vernon for most Turks. 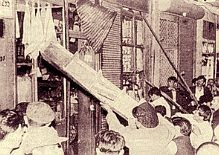 False rumors, fueled by the Turkish government, blared spurious reports that the birthplace of Ataturk had been destroyed in the blast. The Turkish government brought in thousands of Turks from Asia Minor and Thrace, who assisted in the destruction and mayhem towards the Christian Greek minority.

Turks, who can be very nationalistic, arrived in Istanbul in waves, destroying churches, killing Christians and raping Greek women. Only nine out of eighty Greek churches were left undesecrated; twenty-nine were demolished. The Turks viciously attacked the huge cemetery where the Patriarchs of Constantinople are buried, and tossed the bones onto the streets.
– – – – – – – – – 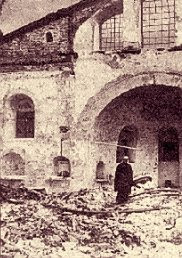 It is believed that about 100,000 Turkish citizens participated in the murder of Greeks and the destruction of their property. Dr. Spero Vyronis, the world’s pre-eminent scholar of Ottoman and Byzantine history, depicts the events that took place on September 6th and 7th 1955 as an event that “destroyed the Greek community in Istanbul.” The material damage to the Greek Community was huge with: 1,000 homes were destroyed, 4000-4500 stores were looted and destroyed, thirty Greek males were murdered, and two hundred Greek women were raped.

The rampant murder and destruction was influenced as much by religion as it was by Turkish nationalism. Throughout most of Turkish history Christians and Jews were allowed the keep their faith, but only if they paid a so-called protection tax, and even then they were treated as second-class citizens. To the kuffar or unbelievers in Muslim lands such as Turkey, the so-called Islamic tolerance has been intolerable. The kuffar (Greeks) in Turkey no longer paid this protection tax, and this alone opened the door for their persecution by Muslim Turks. Besides the Greeks, among the vulnerable minorities were Jews and Armenians.

The intolerance of their tolerance

An example of the so-called tolerance is the status of the unbeliever, who is known as a dhimmi. This dhimmi status applies to the following groups; Christians, Jews, Sabians, and Zoastrians. According to Dr. Andrew Bostom, the author of The Legacy of Jihad, “communities of the people of the book (“book” meaning the Bible, thus referring primarily to Christians and Jews) might remain in the land, but they must be in subjection.”2 Dhimmi status is oppressive, and dhimmis are treated as second class citizens. They have been denied many of the rights taken for granted in the West, especially those enjoyed by women.

Non-Muslims are thus given the chance to convert to Islam. By modern Western standards, life for the kuffar under Islamic law affords no freedom at all. The Christian Greeks, under Islamic law, were set apart from the true followers of Allah by Muhammad and were forced to submit and pay the jizya, the so-called protection tax. The third choice the vanquished face was death.

In “Rights of Non-Muslims in an Islamic State”, Samuel Shahid tells us that an Islamic state is based on ideology which intentionally discriminates based upon one’s religious beliefs. Based upon the writings of Pakistani scholar Mawdudi the basic differences between a Muslim and non Muslims are as follows:

Under Islamic law, those who pay the protection tax are classified as subjects of Dar-us-Salam or the house of peace. Those who are not under Islamic dominance, or who refuse to pay the so-called protection tax are classified as Dar ul-Harb, the or house of war. This was the status of the Greeks during the 1955 riots, and for Islamic extremist this is the current status of the United States, until we submit to Islam. Modern Greece could potentially face this danger because it was once under Islamic domination.

Below is a summary of the legal code that defines a dhimmi according to Islamic jurist.

Unless the Greeks fight to block the entry and Turkey into the European Union, they might not only become a minority in their own land, but also come under the tutelage of their Muslim masters. In time they will face the same fate their ancestors faced after the Battle of Manzikert, over nine hundred years ago. It is not too late for Greeks and other Europeans to take a stand and stop the Islamization, but first they must wake up to this clear and present danger. This is not Islamophobia but Islamorealism!

“Although the pogrom of September 6-7, 1955, occurred half a century ago, its legacy is caught up, even today, in a larger web of regional and international interests. This web is, indeed, the key to understanding important parts of this ongoing history. The ‘success’ of the Turkish military behemoth during the last fifty years has, in fact, made the Turkish state a persistent violator, not only of the human and civil rights of its minorities, but also of those of its vast ethnic Turkish majority.”

I taught in Turkey, and while I believe most of the Muslims that I met in Istanbul would not go to this extreme, there are some who would. With the new Islamic party in control, history can repeat itself. The Turks I met while I was there were amongst the kindest and most giving people I have known, but this does not mean that the violence described above did not happen.

If Muslim immigration — by both legal and illegal means — increases, then the Greeks may once again find themselves as dhimmis, or refugees fleeing their own ancestral lands. Turkey must not be allowed to join the European Union!

8 thoughts on “The Threat to Greece”