I’ve reported on several previous occasions about “The Meme That Would Not Die”. Every time I think it’s dead and buried, it claws its way out of the grave and walks abroad, trailing clods of dank earth.

I’m talking about the venerable canard that Vlaams Belang is “fascist”. Or, if you’re a bit fastidious, and don’t want to go all the way, Vlaams Belang is “neo-fascist”. Or maybe “neo-Nazi”, just to make sure the ghost of Auschwitz hovers in the air over your revenant totalitarian. 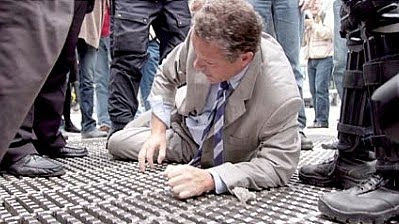 Whenever the Vlaams-Belang-is-fascist smear is resurrected, I repost the above photo and say:

Look at this picture. Now, tell me: Who are the real fascists?

For the record, the man in the photo is Frank Vanhecke, the party leader of Vlaams Belang. On September 11, 2007, during a peaceful demonstration against Islamization in Brussels, he and other party leaders were knocked down, roughed up, handcuffed, and hauled away to jail by the police. Mr. Vanhecke even had to endure the pain and humiliation of being grabbed by the privates and perp-walked to the bus with his hands cuffed behind his back.

Now, tell me again: Who are the real fascists?

But the meme will not die. Its most recent visit to the land of the living came back in January, when the New York Times Magazine published an article about the LGF wars which included interviews with Robert Spencer and Pamela Geller. The author referred to Vlaams Belang as “neofascist”, and said, “Even to most right-wing sensibilities, Vlaams Belang is certainly beyond the pale.”

The most jaw-dropping moment in the article came during the author’s interview with Robert Spencer:

“Filip Dewinter has said some things I deplore,” Spencer says. “But I don’t consider myself responsible for him just because I was at this conference and he was, too. That’s an outrageous kind of guilt by association. Let me ask you this: a few years ago I spoke at a Yom Kippur service, and one of the other speakers was Hillary Clinton. Does that make me a supporter or her work, or her of mine?” [emphasis added]

By referring to “guilt” without even an “alleged” to soften it, Mr. Spencer implicitly supported the author’s contention that Vlaams Belang is “neofascist”. That even a redoubtable Counterjihad warrior like Robert Spencer could still be held in thrall by the “fascist” smear only goes to show how hard the meme is to kill.

Then, of course, we had Glenn Beck and his “fascist” scattergun spraying all those European “right-wing extremists”, including Geert Wilders.

But it gets even worse. The most recent issue of National Review features an article entitled “Censorship as ‘Tolerance’“ by Jacob Mchangama. In the third paragraph of an otherwise excellent overview of the suppression of free speech in Europe, Mr. Mchangama says:
– – – – – – – – –

“Admittedly”? Who “admitted” it?

And where’s the evidence of “fascism”?

Nobody has any. This is just something that everybody knows.

Yes, the Meme of the Living Dead is back. If the venue were The New York Times or The New Republic, it would be a “ho-hum, there they go again” moment. We could simply ignore it and go about our business.

As its in-house superstar, the magazine’s masthead boasts Jonah Goldberg, the author of the indispensable Liberal Fascism. Couldn’t they have asked his advice about the definition of “fascism”?

Nobody knows better than Mr. Goldberg the most important fact about fascism, one that the socialists and communists have successfully obfuscated for the past seventy years: fascism is a form of totalitarian socialism. Stalin, Hitler, and Mussolini were three peas in a totalitarian pod.

Vlaams Belang, on the other hand, is one of the most liberty-oriented free-market parties in Europe. It’s less socialist than the Republican Party of the United States. What makes it the enemy of the Belgian (and EU) establishment is its unabashed nationalism and its push for an independent Flanders. This puts it beyond the pale, and makes the “fascist” label necessary so that it can be confined to the Outer Nazi Darkness along with all the other politically unacceptable groups.

And let’s face it: when the detractors of Vlaams Belang say “fascist”, they deliberately conflate the word with “Nazi”, with the ultimate goal being to bring the Holocaust Cone of Silence down over the party so that its message can never, ever be heard by anyone who hopes to remain respectable.

This shunning of “Nazis” is very effective. It results in what I call the Screaming Nazi Heeber-Jeebers, a highly contagious affliction that causes anyone so accused to run and hide under the bed and keep very, very quiet until the fever passes.

The appropriate response to the Nazi accusation is not to deny it, because denial implicitly acknowledges the validity of the assumptions behind the accusation. The proper reaction is to ignore the accuser, or even better, laugh in his face.

Just imagine a prominent talking head on TV, one of the usual conservative suspects. Picture him being called “racist” or a “fascist”. Now see him double over with laughter at his interviewer, tears running down his face, speechless in his merriment.

Wouldn’t that be wonderful?

You may say I’m a dreamer, but I’m not the only one.

Vlaams Belang is repeatedly smeared as “fascist” because of its predecessor, Vlaams Blok. If you trace its history far enough back, you find ex-Nazis and Nazi sympathizers. This puts the modern party beyond the pale, even though none of those old leaders remain, and there’s no sign of Jew-hatred left in Vlaams Belang.

The ugly secret about Belgium — and most of the rest of Europe — is that there are far more anti-Semites on the Left than the Right, and farther Left you go, the more virulent the Jew-hatred. Filip Dewinter has steadfastly championed the Jews of Antwerp in the Flemish parliament, while some of his socialist colleagues were marching in alongside radical Muslims, chanting “Hamas! Hamas! Jews to the gas!”

We have a parallel situation in the United States with the Democrats, who until the 1960s were the party of bigotry, segregation, and white supremacy. Forty years later Sen. Robert Byrd could hang with the Progressives, despite the fact that he was a former Ku Klux Klan leader. Nobody held it against him.

However, any Republican who ventures within a hundred miles of a Confederate flag can expect a tsunami of vitriol branding him a “racist”, a “supporter of slavery”, and much, much more. There’s nothing anyone can do anything about this double standard; it’s just the way the rigged media game works. The Progressives get away with virtually anything, but a conservative is doomed.

It’s the same with the communists. Ex-communists — some of them with blood on their hands — have practiced politics openly in Europe since 1989. There’s a tacit agreement among the elite not to look too closely at the past indiscretions of the Left, but the Right is fair game.

And so it is with Vlaams Belang. After years and years of attacks, the only thing definite its opponents could come up with is that Filip Dewinter has a cross on his bookshelf. Nevertheless, the rules of the game make the party “neo-fascist”, and that’s that. Everybody knows it.

It’s time to sharpen our wooden stakes and dust off the silver bullets: this undead meme needs to be sent to its final abode.

22 thoughts on “The Meme of the Living Dead”