Below is the text of the speech given by Brigitte Gabriel on Monday night at ACT! For America’s National Conference and Legislative Briefing in Alexandria:

Eight years ago this week, I gave my first speech about the threat of radical Islam to America and the world at a small temple in my hometown where I shared what I had survived as a child going through life in an underground bomb shelter. That speech ignited a fire within me and made me realize my purpose. That day I experienced what it is like to be an American. To live in a country where an individual can stand up without the shackles of tyranny and oppression, and become a leader. 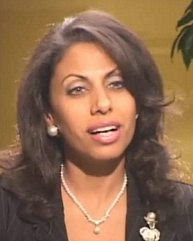 When I was growing up I knew that only three kinds of people existed in the world: killers, victims and bystanders. During the darkest of times of war inside our bomb shelter, my elderly parents, who were business owners and leaders in our community, talked to me about leadership and how the leaders of the world are going to stand up against radicalism and come to save us. Sadly, leadership in the West was snoozing under the weight of apathy and indifference. The lesson I learned gave me a fierce determination to speak up against evil, to become a resilient survivor, not a broken victim, and a passionate leader of action against apathy.

Eight years ago I launched American Congress for Truth and began speaking all over the country, educating Americans about the threat of radical Islam to world peace and our national security. I eventually learned that education is important, but it is not sufficient. Education must be coupled with action.

ACT! for America was launched in 2007. Today we are the largest national security grassroots movement in the US. We are 110,000 members strong; we have over 400 chapters nationwide with a full time lobbyist on Capitol Hill. We have helped introduce and pass legislation, and influenced elected officials as well as major corporations to make right things that were wrong! Later you will see a video detailing our accomplishment this year.

Tonight I am surrounded by leaders who are doing something for their country. Who are standing up in defense of our security, our liberty and our freedoms. What makes America great is the spirit or its people.

Our founding fathers, worked tirelessly setting the foundation for the great nation we have today. They gave us our Constitution, the Declaration of Independence, and Bill of Rights. Many of them died broke in the process and many of our ancestors died on the battlefield fighting to preserve that which these bold and visionary men created. The least we can do is protect the greatness which they have established for us and our future generations.

Since America was born, each generation of Americans were called to stand up as a beacon of light to the world, to fight evil and spread justice. Only few generations throughout our history have been entrusted with the privilege to demonstrate their loyalty to our constitution and values. Few have had the honor to serve in a leadership role either as soldiers in the battlefield or citizen volunteers supporting in the home front. As America stood up against and defeated communism and Nazism, now is our time to stand up and defeat Islamofascism.

Today we are summoned to lead in our communities and our nation. We are summoned to wake up the apathetic and inspire the despaired, to silence the liars and educate the patriots. For if we fail to inform the ignorant, we will fail to save the informed.

It is time to throw political correctness in the garbage. It is time to silence the apologists for America. I am sick and tired of hearing people say I am an African-American, I am a Spanish-American, I am a Chinese-American — I am nothing but an American! I have a message to those who hate America, who speak ill of America who want to change America, Please get the heck out of here and back to whatever country you came from and leave this nation to us.

One lesson I learned very early on in life: people treat you the way you allow them to treat you. Evil dwells when courageous men become bystanders. Lies spread when the informed become silent. Society deteriorates when apathy replaces activism. Tyranny comes when leaders become mediocre and haters become organized.

This is why we are here tonight at this conference because each one of us is a leader and an instrument of change with history as our final judge. Some give money and some give of their time, but together we build the largest national security organization this country has ever seen. We ACT for America with joy in our hearts and pride in our soul. The excitement, the energy, the dedication embodied in this room tonight and in our organization nationwide are the spark that will light the torch in the hearts and minds of millions of frustrated Americans who want to see our nation protected from those who are driven to do us harm.

We have been blessed so generously by this country. Much is given; much is required. As important as all other causes are, none is more important than our national security and freedom, for if we are ruled by tyranny or killed by terrorists, all other causes will not matter. May we go forth from this meeting into our nation renewed with passion, with information, and with new friendships, so we may be worthy of walking in our forefather’s footsteps and deserving of the honor of serving and preserving our nation for the future generation of America.

Thank you for being here tonight. May God bless you and bless the United States of America. Thank you.

3 thoughts on “Speaking Up Against Evil”