Geert Wilders receives death threats so often that they hardly seem news anymore. The latest one, however, stands out for several reasons. First of all, the threat was issued in a glossy magazine called Inspire, which was reputedly published by Anwar al-Awlaki, the fugitive Yemeni-American imam who provided spiritual guidance to the Lap Bomber and the Killer Shrink of Fort Hood.

The second reason to take note of this particular threat is that Mr. Wilders’ name was just one on a list that included Flemming Rose, Lars Vilks, Molly Norris (the creator of “Everybody Draw Mohammed Day”), and others.

Our Flemish correspondent VH has translated an article on the topic from De Telegraaf: 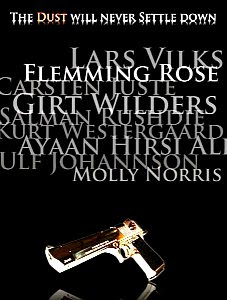 Geert Wilders has again been threatened with death by Al Qaeda. The PVV politician, along with others, including Ayaan Hirsi Ali, is mentioned on a “hit list” in the Muslim terrorists’ glossy magazine “Inspire”.[1]

The English-language magazine was probably published by Anwar al-Awlaki, a leading Al Qaeda member in Yemen, and focuses on radical Muslims in Europe and North America, including among other things a manual for the do-it-yourself making of bombs at home. Anwar Al-Awlaki is viewed as a principal for the [failed] bomb attack on the flight from Schiphol to Detroit by Umar Farouk Abdulmutallab.

Wilders’ name, albeit with the misspelled name “Girt”, appears in the professional-looking magazine on a “hit list,” above a picture of a golden gun and under the text “The dust will never settle.” On this page, also the names of Danish cartoonist Kurt Westergaard, author Salman Rushdie and others are mentioned. [2]

In reaction, Wilders said he was shocked by the threat. “It is no mean feat to be mentioned in an Al Qaeda magazine with a gun underneath. This is awful. It of course is obviously not meant to send flowers, but to hurt people.”

The heavily protected PVV leader is worried about his safety. Earlier this month the Dutch newspaper De Telegraaf revealed that undercover officers from the Special Security Missions Brigade (BSB), a special unit of the Royal Military Police, had recently managed to smuggle a gun into the Wilders’ office, within the offices of the protected PVV group in the Parliament Buildings in the Hague. “All the more reason to be vigilant,” Wilders said. “I assume that security has become more alert now.” Of the four BSB tests, to check the security in the parliament buildings, two succeeded. Meanwhile, the security has been tightened.

5 thoughts on “Another Day, Another Death Threat”