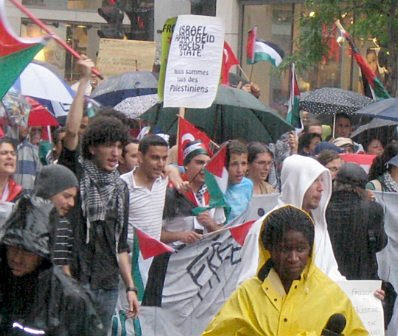 Sign in the background: “Yes to Judaism — No to Zionism — Israel = Palestine”

Here’s a report on the anti-Zionist demonstration that took place this weekend in Montreal, from a reader who was there:

Only a couple of hundred of courageous demonstrators showed-up yesterday in Montreal for what was supposed to be a clear message of unity and solidarity with the Palestinians against the blockade in Gaza.

“Gaza is going to be Israel’s Vietnam!” some screamed.

Obviously not a word about Hamas. But, hey!

“We are not here to talk politics. We’re not declaring war on Israel. This is not a military problem, it’s humanitarian, get that?”

“We are trying to bring some help to these people.”

It was cold (around 10C) and also very rainy. Not a good day for jihad. Sorry for humanism and solidarity. In fact, Montreal is not a really good place for demos, from what I’ve witnessed over the years. In fact, I’ve barely seen a worse city in North America for political street revolts than Montreal. And to be quite honest, I don’t think that there will ever be an “Arab Street” in Montreal or anywhere in Quebec for that matter. Thank God.

While I was watching them (the soaking mujahideen and the dhimmis) on the march, chanting their brilliant slogans under a carpet-bombing shower, I had this flash that could perhaps be of some interest.

Montreal is probably the most efficient Third Worlder and immigrant repeller in the whole West: six months of winter, and we are heading for the banning of all sorts of Islamesque garments in the coming year (not counting French language regulations).

A huge economic disadvantage compared to other cities in the West, I agree. But nowadays, in this debilitating world, the goal is no longer to compete with China or India with 10% economic growth, but to slow down European-style degradation. How about -45C, Mr. Mohammed?

Stalin was right, after all: our best generals are surely December, January, and February — and let’s not forget March and April.

If one day Europe falls, at least you know where to retreat.

5 thoughts on “The Wet Jihad Parade”