Anarchist anti-globalist demonstrators — looking much like their Antifa comrades in Europe, clad in black and wearing masks — went on a rampage yesterday in downtown Toronto during the G-20 meeting. They smashed windows, torched a police cruiser, and caused general mayhem, although they were unable to get anywhere near Barack Obama and all the other heads of state at the summit.

You’ll notice that the anarchists did not consider the videotaping of their antics by citizen-journalists to be free expression and thus worthy of protection. Watch them try to shut down the cameraman in this video:

According to the AP, more than five hundred people have been arrested so far, most of them home-grown Canadian anarchists. A sizeable contingent was arrested during a raid on the campus of the University of Toronto. 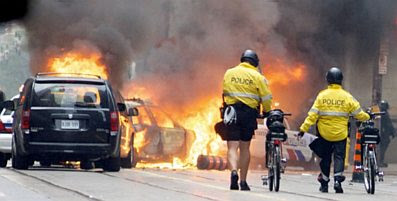 Ghost of a flea has a series of videos taken on Yonge Street after the demonstrators had passed through. The riot police were concentrated in the financial district protecting the G-20 meeting and the banks, leaving the demonstrators the opportunity to wreak havoc with impunity on the commercial streets.

As the cameraman notes, the targeted businesses were almost all American franchises such as Starbucks, McDonalds, American Apparel, Burger King, etc. After the worst was over, the streets filled with ordinary Torontonians who came out to rubberneck and photograph the wreckage.

With the glass all over the sidewalks in front of the business establishments, it looked like Toronto’s version of Kristallnacht.

9 thoughts on “Smashing Up Toronto”