This year’s meeting of European Counterjihad activists convened last Saturday morning in a suburb of Zurich. As is my habit, I arrived a couple of days early to allow time to recover from jet lag and see the local sights before beginning work in earnest. On Friday morning, under the expert guidance of a local Swiss participant, I took a tour of Zurich along with several other people who arrived early for the meeting.

The city of Zurich lies in the German-speaking area of Switzerland at the north end of a long lake called Zürichsee, where it is joined by the Limmat River. The site has been settled since approximately 5000 BC, and the present city was founded more than two thousand years ago by the Romans, who named it Turicum.

We walked from the main railway station to the lake, and then up the Limmat to the Grossmünster, the Great Cathedral of Zurich. 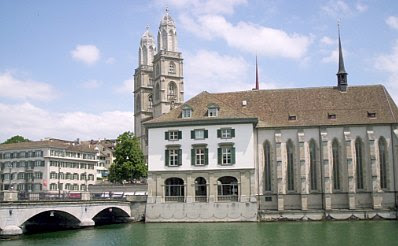 The south tower of the cathedral was open to visitors, and the more adventurous members of our group made the long climb up a spiral staircase to the viewing area at the top, where we were afforded a spectacular view of the city in all directions. This is the skyline to the northwest: 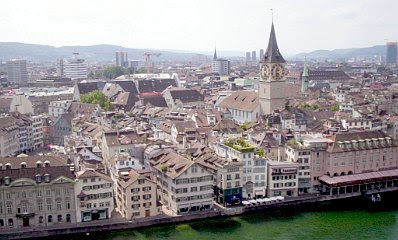 We spent the rest of the afternoon prowling the narrow streets of the Old Town, stopping occasionally to refresh ourselves with food and adult beverages in the outdoor seating areas of several cafes. 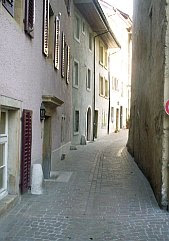 While walking around Zurich and its suburbs, I noticed that cultural enrichment has crept into the districts outside the main tourist zones. The kebab joints and pizza restaurants are often run by Turks, and crowds of men sitting in front of them glared at us as we walked by. Hijabs were in evidence on the street — and, as I reported yesterday, could also be seen on the heads of security personnel at the airport.

By and large, however, Zurich seemed to be only lightly enriched, compared to Vienna or, even worse, London. Unlike Copenhagen — where every pizza joint is owned by Arabs — there are Italian pizza restaurants in the city and its suburbs that are run by actual Italians.

The Swiss are fortunate to have taken action and passed the minaret ban while the country is still in the early stages of Islamization. With the growing influence of the Swiss People’s Party, Switzerland may yet avoid the dire situation that prevails in most other Western European countries.

On Saturday morning we got down to business. I already knew many of the participants, but our location made it easy for French and German contingents to participate, so I was able to make the acquaintance of a number of people I had previously met only through skype or email.

Delegates to the meeting included:

In addition to the people listed above, there were attendees from Norway and Sweden, and representatives from the SVP, the EDL, and Lega Nord were also present. Belgium and the Netherlands were in the midst of major elections, and unfortunately sent no delegates to the meeting.

Elisabeth Sabaditsch-Wolff is already known to our regular readers, and you may also recall Hans Erling Jensen, the wily Dane who is counter-suing the heirs of Mohammed for insulting infidels. It was a pleasure to finally meet Gandalf of VV&D, as well as a number of other French Counterjihad activists whom I had previously known only by email or skype. Kitman, the video whiz who works regularly with Vlad Tepes, was on hand to talk about media. Two major German-language news sites, Politically Incorrect and Europe News, sent several representatives to weigh in on alternative media.

I’ll be covering the individual sessions in some detail in later posts, but a brief overview is in order. Like the meetings in Vienna and Copenhagen, the sessions were mostly in workshop format, with moderated general discussion in a roundtable format. Emphasis was placed on the fact that in the repression of the current politically correct regime, what we do makes us dissidents. A nascent totalitarianism — in which state control on both sides of the Atlantic is exerted through government social and financial benefits — will gradually force us into a kind of samizdat.

With these repressive conditions in mind, several of the sessions focused on working around the MSM to spread the truth about the dangers of Islamization. For now, until our countries bring to bear the kind of controls on the internet that exist in China, the new media are our best hope. YouTube and other online video services are particularly important in the viral spread of dissident information.

Aeneas gave a presentation on the English Defence League, which has mounted the most successful grassroots anti-jihad operation yet seen in the West. The EDL utilizes alternative media to get around the wall of negative MSM coverage, and organizes its membership for collective action using a variety communications strategies — online forums, Facebook, email, SMS, etc. The EDL’s methods are so successful that the group can almost instantaneously raise a local gathering of members in response to breaking events. In this they have taken a page from their Muslim adversaries, who are notorious for their generation of flash mobs.

Gandalf of VV&D led a workshop on the Alliance to Stop Sharia. The French constitution is based on laïcité, which is the principle of absolute secularism in government. Under laïcité, Islam cannot be officially attacked, since religion falls outside of governmental purview. However, because sharia is a legal system, it is a valid object of constitutional scrutiny. Moreover, it can be easily shown to violate the French constitution.

The Stop Sharia initiative thus focuses entirely on Sharia, and never mentions Islam. By avoiding religion and focusing on the law, we can see that Sharia demonstrably violates the Universal Declaration of Human Rights, the European Convention on Human Rights, the English Bill of Rights, the American Bill of Rights, and the French Declaration of the Rights of Man. If we sidestep the question of religion, Islam becomes quite vulnerable to a concerted attack on its illiberal legal tenets — which are an absolute mandate of its scripture.

On Sunday afternoon a member of parliament for the Swiss People’s Party (Schweizerische Volkspartei or SVP, a.k.a. Union Démocratique du Centre or UDC, Unione Democratica di Centro or UDC, and Partida Populara Svizra or PPS) addressed the meeting. He led a discussion about his party’s successful referendum campaign that imposed a ban on the building of new minarets. He urged delegates from other countries to follow the Swiss example and employ direct democracy in their fight against Islamization. The Swiss constitution permits citizens to force a nationwide referendum after obtaining a threshold number of petition signatures, but not all European countries allow such initiatives. Switzerland, however, is not the only country with such a provision, and the EU itself provides for citizens’ referenda.

Other topics covered in the weekend’s sessions included parliamentary legislation, freedom of speech, fundraising, the OSCE, and the growing threat of Turkey.

As is usual in these meetings, some of the most interesting and lively conversations occurred at lunch or in the evening, as delegates shared ideas and compared notes over food and drink. I learned from the French delegation that official French government propaganda is failing massively, that people are not fooled, and that they no longer believe the official lies. There is a sense that the country is nearing the tipping point, and is on the verge of a fundamental shift in public opinion.

The same theme was expressed by delegates from other countries. All across Europe official propaganda is losing its effectiveness, which is why the news media are becoming more blatantly biased. Denunciations of politically incorrect parties and politicians are increasingly shrill, with Geert Wilders and his PVV being referred to as “rats” by German media outlets after the PVV’s recent electoral success. The demonization of the EDL by the BBC and other British media is ratcheting up, but it is no longer working. Even Sweden is experiencing a growing public awareness of the nature of the Islamic problem.

Underlying all of this is the financial crisis, which may be the proximate trigger for the coming changes. This is the unpredictable factor — if the euro and the banking system can hold out for a few years longer, the demographic advantage enjoyed by Islam can only increase, and make the reckoning that much more ugly when it finally arrives.

In any case, events in the Netherlands, Switzerland, and Britain show that change is already beginning. Since I first started attending these meetings three years ago, more change has occurred than I would ever have believed possible. Given the current potential for cataclysmic events — an Iranian nuke, for example, or the collapse of a major currency — predicting what will happen in the next five years is all but impossible.

Once again, I’d like to thank all the people whose kind donations allowed me to travel to Zurich for this year’s meeting. You all know who you are, and you have earned my deepest gratitude.

Update: A misspelled name in the above text has been corrected.

8 thoughts on “Slouching Towards Zurich”