Some of you may remember my fondness for “Hello Kitty” products, particularly those guns.

I found my first Hello Kitty gun at MauserMedic’s “Ugly Gun Sunday” feature. I just went over to his site to look for that beauty [he has great photos] and was confronted with the reminder he was going to deploy to Afghanistan. Turns out he’s there right now.

Oops! When I read that post back then, I was indignant about his fellow-employees’ reaction to his news: how dare he sign up for the National Guard and inconvenience them by vacationing in Afghanistan while they have to stay here? So what’s wrong with maybe being against the troops in Afghanistan while still remaining loyal to your fellow worker?

Or is that too nuanced? Sheesh.

Anyhow, I suggest you look at some of his most recent posts on life in the sandbox.

Now it turns out that there is much more than that to Hello Kitty than my little AK 47, as you can see in this blog, Hello Kitty Hell. I guess some people just don’t get cute irony?

They probably never heard of kitsch either. Or menopause (that’s when some women become afflicted with a return to stuffed animals, or begin putting little china figurines on the top of the toilet tank. Not all of them, of course. And if it’s your mother-in-law, just avert your eyes).

The French understand all this. Of course they would. Hello Kitty is so very French, just as Jerry Lewis is — no, I don’t understand it either. 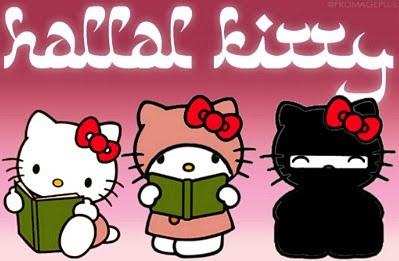 He says (the Baron’s translation):

Alibekov and I set ourselves a little graphics challenge: adapt “Hello Kitty” to modern France! The timing was tight, but here is my contribution to the competition.

Good, but is Alibekov’s submission better than mine?

And he links to Alibekov’s work, here.

…Ah, so hard to choose. These bloggers really know their Hello Kittehs, all right.

This is a heavy question, but which do you prefer?

I think I’ll send them on to MauserMedic wherever he is in Afghanistan. I hope it brings a smile, as his photos often do for me.

At the very least, these images will improve his CQ (Cuteness Quotient). The Baron’s CQ is definitely a bit on the low side, with a matching gag reflex. I think being a guy interferes with CQ…unless you’re French.